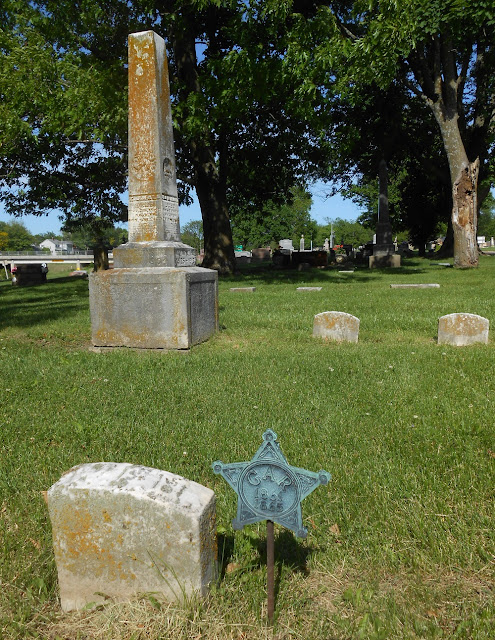 The grave of William F. Hall, a veteran of the 34th Iowa Volunteer Infantry who died at age 22 on Aug. 27, 1866, would have been among the 14 decorated during Chariton's first Decoration Day observance.

This is the week leading up to Memorial Day, set aside to honor men and women who died while in military service to their country. For the better, most likely, it's become a day to remember all departed loved ones. For the worse, we sometimes lose track of the original purpose.

Memorial Day originated as Decoration Day during 1868 when the newly organized Grand Army of the Republic's commander, General John A. Logan, declared May 30 a day to decorate the graves of fallen Union soldiers with flowers. Various groups had been decorating graves in various places --- including the former Confederate States --- at various times during the years immediately after the war. But this formalized the observance in the North.

It's believed May 30 was selected as the date because it was thought the most flowers would be in bloom then --- the date itself had no significance. The term "Memorial Day" was used first, so far as anyone can determine, in 1882. But it still was Decoration Day in many places until after World War II. Those flag holders and miniature flags came along later, too. The original focus was on flowers.

From the beginning, it became customary to decorate the graves of all Union veterans, in part because the remains of most who had died in service were not buried near their homes. Instead, the remains had been gathered from scattered battlefields and temporary cemeteries and re-interred in national cemeteries throughout the war zone. Additionally, most of the veterans buried near their homes by 1868 had died of complications of diseases or wounds related to their service.

A century later, during 1968, congress moved Memorial Day to the last Monday in May in order to create a three-day weekend.

Chariton was not on the cutting edge of Decoration Day observances --- a fact noted by several editors of The Patriot as the 1870s advanced.

"Next Friday, May 30th, is Decoration Day. We have not heard of any arrangements being made to honor the soldier dead buried at Chariton. Great preparations are being made everywhere else," The Patriot editor noted in his edition of May 28, 1872.

Two years later, on May 27, 1874, the lament in The Patriot was similar: "Next Saturday, May 30th, is the day set apart for strewing or decorating with flowers the graves of soldiers who died in the war of the rebellion. Neighboring towns have made the necessary preparations for a suitable observance. Will Chariton permit the day to pass with observing it?"

The next year, The Patriot editor devoted several inches of type to a lengthy complaint, commencing: "Have we no soldiers buried in our cemetery? If so, would it not be well to honor their memories by scattering a few flowers on their graves the 30th inst.? Every other town almost, observes Decoration Day with some appropriate ceremony and by adorning the graves of Union soldiers with a few flowers. Why not Chariton?"

The answer, it would seem, was the absence of an organization willing to take on the job. That gap was not filled until Oct. 18, 1879, when Daniel Iseminger Post No. 18, Grand Army of the Republic, was organized. Chariton observed Decoration Day for the first time the following May as a result.

Chariton's first Decoration Day observance was scheduled for Saturday, May 29, 1880 --- most likely to avoid conflicts with church services on the Sabbath, May 30.

The skies opened and rain poured down on the scheduled date, however. "Saturday was the gloomiest day of the year, and all thoughts of observing Decoration Day were wholly abandoned by the largest proportion of our citizens," The Leader of June 5 reported.

"But late Sunday morning a few started out notifying others to meet and form in procession, which resulted in a fine display and a creditable attendance."

The Patriot of June 2 attributed the success of the observance to D.M. Galloway, "who at an early hour on Sunday morning took the initiatory steps for carrying out the program. Mr. Galloway also went to the cemetery east of town (Douglass Pioneer) and decorated two graves."

"The flowers for the decoration were mostly furnished through the efforts of Mr. Galloway, who with the assistance of a few comrades tended largely to make the decoration a success," The Patriot added.

The procession from town square to the cemetery "was headed by the Consolidated Band, followed by the Knights of Pythias in uniform, Fire Companies, Grand Army of the Republic and citizens. Eloquent addresses were delivered at the cemetery by Col. Dungan and J.C. Mitchell."

According to The Leader, 14 Chariton Cemetery graves were decorated and "the whole was under the direction of Capt. McCormick and J.H. McFarland."

Oliver Coffman's grave would have been one of the two decorated by Galloway at Douglass Cemetery, but there's no way of telling who the other might have been.

Two years later, a list of the 15 graves decorated during 1882 in the Chariton Cemetery --- and by then Decoration Day observances were well established --- was published in The Patriot so we can be fairly sure that 14 of these were the first to be decorated as Chariton began, somewhat belatedly, observing Decoration Day: