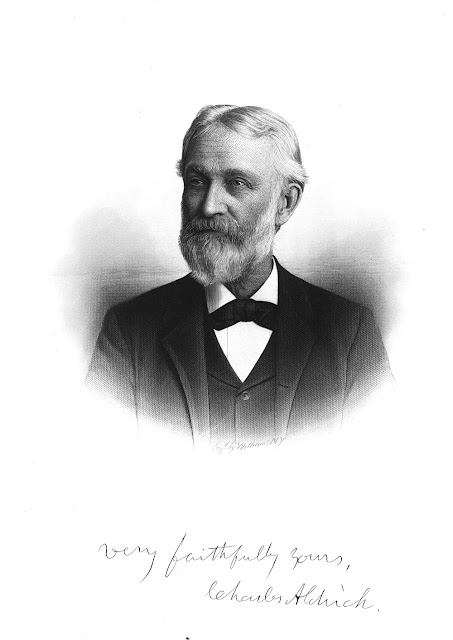 This is Col. Warren S. Dungan's engraved portrait of his long-time friend and colleague, Charles Aldrich, which floated to the surface yesterday while trying to sort out a numbering crisis among the historical society's fifty years of accessions. Each numbered. Occasionally incorrectly.

Col. Dungan was a Chariton attorney, distinguished Civil War veteran, state legislator, Iowa lieutenant governor and founder of the first incarnation of the Lucas County Historical Society. At the time he birthed it during 1901, Lucas County's was the first county historical society in the state. The society did not survive the indifference of two generations that followed, however, and was not resurrected until 1965.

Aldrich was one of those incredible renaissance characters that Iowa used to produce. He has fallen into obscurity because (a) he was a man of some humility, (b) he left no children to burnish his image and (c) his passions were of the sort that did not excite the masses --- Iowa history, wildlife (especially ornithology) and honest government.

The two men became friends during the many years both were involved in the Iowa Legislature and grew closer after Aldrich delivered a challenge to Iowans to begin taking their history and its artifacts seriously. Dungan was the first to implement his challenge to each of the counties to form historical societies of their own.

When Aldrich died during March of 1908 in his 80th year, Col. Dungan was called to Des Moines to deliver an oration at the second of his three funerals, held in the original Iowa State Historical Building, Aldrich's pride and joy (the other funerals were held at his home in Boone and in Webster City, where he is buried).

Someone could write a book about Aldrich --- seriously. But I want to focus on his interest in birds, timely this year when the first Big Day of Birding on May 21 will celebrate the fact that Lucas County is the site of two Bird Conservation Areas recognized for their importance on state, national and international levels. Aldrich would be pleased that there are several of these areas scattered around the state. We're pleased that only Lucas County has the distinction of having two of them.

Aldrich was a native New Yorker, born during 1828 in Chautauqua County. He learned the printer's trade in New York and launched a career in journalism that would be his principal occupation for much of his life. During 1851, he married Matilda Williams and during 1857, the couple came west to Iowa and located in Webster City where he founded a newspaper and called it The Hamilton Freeman, still in business today as the daily Freeman-Journal.

He continued to edit and publish The Freeman until 1862, when he entered military service during the Civil War. After the war, he was associated with newspapers in Dubuque and Marshalltown, but eventually returned to a farm he had purchased in Hamilton County and turned to reporting on a free-lance basis for other publications.

Aldrich was elected chief clerk of the Iowa House of Representatives in 1860 and was re-elected to that potion after the war. During 1882, he was elected to represent Hamilton County in the House. While serving as clerk and legislator he authored or championed legislation that provided for the preservation of public documents, prevented public officials from accepting free passes from railroads and established the current county supervisor system of local government. But a bill protecting Iowa's non-game birds --- the first of its kind on the books --- was among the achievements he was proudest of.

But back to the birds, one of Aldrich's lifelong interests.

"Mr. Aldrich had been a devoted lover of birds and all nature from early boyhood," an Iowa newspaper declared upon his death. "In the death of Mr. Aldrich the birds and dumb animals lose one of the best and strongest friends they ever had."

His first wife, Matilda, "was in full sympathy with all her husband's pursuits and was a member of the American Society for the Prevention of Cruelty to Animals and a lover of birds." Matilda died during 1892 at Boone, where the couple had moved in 1891 in order to be closer to Des Moines and Aldrich married the equally supportive Thirza Briggs during 1898.

One of 25 founding members of the American Ornithologists' Union, Aldrich wrote extensively about Iowa's bird life for a variety of journals as well as newspapers in Iowa and elsewhere. Among the titles of his writings were "Wild birds know their friends," "How settlement affects birds" and "The merciless war upon the birds."

In the latter, published first in "Transactions of the Iowa State Horticultural Society," Aldrich cites the causes for the rapid decrease in Iowa bird life --- including destruction of the state's native prairie, marshes and woodlands, the killing of colorful birds for their skins, even the practice of encouraging children to raid nests in order to assemble egg collections or use songbirds for target practice.

He became part of the solution during 1870, when as clerk of the House he authored a bill designed to protect Iowa's non-game birds (various measures to protect game birds already were in place). This was the first official attempt in Iowa to protect the majority of the state's bird life, although it did not cover the "birds of prey" we have come to appreciate more as years have passed. Aldrich not only wrote, but also lobbied for and secured passage of the legislation. It was duly published as Section 4063 of the 1873 Iowa Code and reads as follows:

Section 4063. If any person kill, trap, ensnare, or in any manner destroy any of the birds of this state, excepting birds of prey, the migratory aquatic birds, and those which are useful for food, and the killing of which at certain seasons of the year is now permitted by law, or in any manner destroy the eggs of such birds as are hereby intended to be protected from destruction, he shall be deemed guilty of a misdemeanor, and, on conviction thereof, shall be fined not less than five nor more than twenty-five dollars. But persons killing birds for scientific purposes, or for preservation in museums and cabinets, shall be exempt from the penalties of this section, upon making satisfactory proof of the purposes for which they have killed any such bird or birds.

And so, as birders gather in Lucas County during late May to inventory the county's bird population and perhaps increase the number of varieties that have been sighted here --- now approximately 240 --- they can be fairly sure that Charles Aldrich would be there, too, at least in spirit, cheering them on --- if he could.