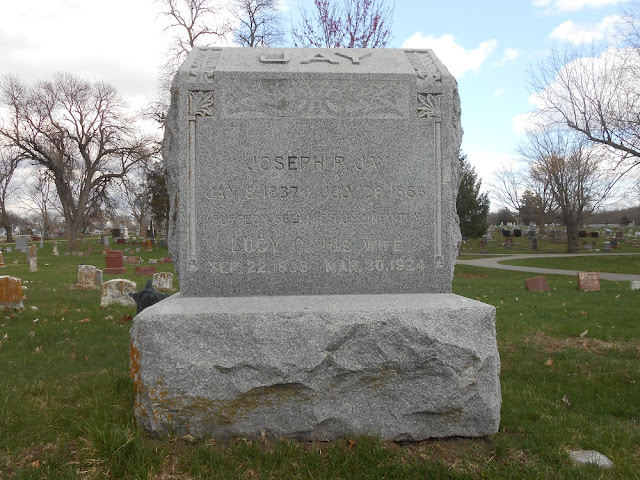 The 34th Iowa Volunteer Infantry, a regiment raised largely in Lucas and neighboring counties, lost only 11 enlisted men and one officer in combat during the Civil War --- but 246 of its men (approaching a fourth of the 1,081 who served) died of disease. That was a fairly common percentage  in that terrible war and the total does not include veterans who died after discharge of war-related causes.

The physician-volunteers whose job it was to care for the men were not immune, as witness the largely forgotten graves in the Chariton Cemetery of Dr. Joseph R. Jay and his brother, Dr. Henry W. Jay.

Henry, born in Indiana on July 17, 1834, was the elder. He enlisted in the 34th Iowa during the summer of 1862 and was commissioned captain and named assistant regimental surgeon when the unit was mustered at Burlington on Oct. 15 of that year.

Joseph, born Jan. 8, 1837, remained in Chariton, now short on medical care because at least two of its physicians were serving, and continued the family practice until late 1863 when he, too, enlisted. He left behind a wife and three small children when he was mustered into service at Vicksburg on Jan. 13, 1864, as major and chief surgeon of the 66th Regiment of U.S. Colored Troops, a unit raised chiefly among volunteers who formerly had been enslaved in Mississippi.

Several weeks after he had begun caring for the men of the 66th, Joseph was offered a commission at lesser rank --- captain and assistant surgeon --- but with considerably better working conditions by his brother's regiment, the 34th Iowa.

The commission was issued, so perhaps Joseph and been considering the move. But in the end, he returned the new commission and continued to serve his men, former slaves, of the 66th. Had he accepted the transfer, he might have lived longer.

Joseph and Henry were among the children of Evan and Hannah (May) Jay, both of old Quaker families, who brought their own brood from Randolph County, Indiana, to Henry County, Iowa, in time to be counted during the 1840 federal census.

The Jays were prosperous and prominent farmers and Evan had political interests. He served as a Whig in the House of Representatives of the Iowa Territorial Legislature, then went on to serve in both the 1846 and 1848 sessions of the brand new Iowa State Legislature from Henry County.

Both of the physician sons studied at Rush Medical College in Chicago. Joseph married Lucy Collins at Fairfield on Oct. 20, 1859, and they came immediately to Chariton to begin their married life. Henry had married Mary Howard Rizer a day earlier, on Oct. 19, 1859, at Sigourney, and they arrived in Chariton during late 1860, when he joined his brother's practice.

Joseph, although overworked --- as military surgeons generally were --- seems to have enjoyed reasonably good health during his first year and a half of service, but overwork, exposure and dysentery caught up with him during 1865 while serving with his unit in Arkansas and Mississippi.

Capt. William F. Sullivan, also assigned to the 66th, described the circumstances of Joseph's illness in a deposition he made at Dubuque on May 25, 1867, as part of Lucy Jay's application for a widow's pension during the year after Joseph's death.

By November of 1864, according to Sullivan, the 66th was stationed at St. Charles, Arkansas, and Joseph was the unit's only medical officer, serving not only as physician but also as hospital steward and dispenser of medicine. Much of the time, his duties were performed "in the open air," Sullivan wrote, because most of the unit's equipage had been left at a previous encampment location.

During February and March, 1865, the unit moved to DeValls Bluff, Arkansas, and then on toward Vicksburg. During this time, according to Sullivan, the weather was "inclement and disagreeable" and in addition to overwork, Joseph suffered from the "exposure necessary to the performance of his duties."

By June of 1865, he was suffering from dysentery, or "chronic diahrrea" as it was generally called at the time, but continued work. During the summer, the 66th was stationed at Vicksburg, Black River and Mississippi City, Mississippi. Joseph soldiered on, but became progressively more debilitated and finally, on the 10th of October, 1865, he was granted a 20-day leave, hopeful that if he returned home to Chariton he might recover his health there.

Joseph would have traveled upriver from Mississippi to Keokuk, then by rail to Ottumwa and finally on to Chariton by stage coach. He reached Chariton later on during October, but by that time was so sick and exhausted that he was confined to his room --- and really never was able to leave it.

For the next several weeks, Joseph's medical leave was extended in 20-day increments as attending physicians in Chariton forwarded reports of his condition by mail to his commanders. Finally, during January of 1866, he was discharged officially from military service when it became clear that he would not recover.

According to those physician reports, Joseph was extremely emaciated, suffered from bloating of the bowels and lower extremities, was in a great deal of pain and was able to walk only a few steps each day.

Although Joseph survived an additional six months, there is no indication that his condition improved and he died in the room he had occupied since the previous October on July 28, 1866, age the age of 29. He was buried the next day in the Chariton Cemetery. His widow, Lucy, was 27. Their children were Lizzie, nearly 6; John Kasson, age 4; and Minnie, nearly 3.

Although the Jays were no longer practicing Quakers --- both Joseph and Henry had married outside the Friends discipline --- the families seem to have retained some Quaker sensibilities. The tombstone erected originally at Joseph's grave probably set the standard for others erected on the family's double lot as the years passed --- small, upright slabs of marble with little more than the given name of the deceased inscribed.

Joseph's brother, Dr. Henry, had been honorably discharged from his duties with the 34th Infantry during 1865, but he had returned to Chariton with his health broken, too --- suffering from tuberculosis, or consumption as it was called then. He outlived his brother by a year and a half, dying on Dec. 28, 1868, at the age of 34, leaving a widow, Mary, and a young son, Charles. He was buried on the family lot near Joseph.

Lucy Jay applied for and received a widow's pension of $25 per month and continued to live in Chariton for several years. Her daughters, Lizzie and Minnie, would live long lives, but John Kasson died April 10, 1872, a few weeks short of his 10th birthday, and joined his father and uncle in the Chariton Cemetery.

When Lucy's daughters grew older, she moved to Indianola so that they might attend Simpson College. Both girls then married and moved east.

Elizabeth's husband, Dr. William C. Davis, was like her father a physician and they settled in Chicago, where Lucy Jay joined them. She died at Elizabeth's home there on March 29, 1924, at the age of 84, nursed during her final illness by both daughters. Her remains were returned to Chariton for burial.

Dr. Davis died of complications from diabetes during 1932 and Elizabeth brought his ashes to Chariton for burial on the family lot, too. When she died during 1951, her ashes joined his behind another of those small Quaker-like stones.

At some point, however, the daughters decided to replace their father's original tombstone with the decidedly non-Quaker upright granite tombstone that now marks his grave and also contains an inscription honoring Lucy, although her much smaller and simpler stone remains intact just to the north. 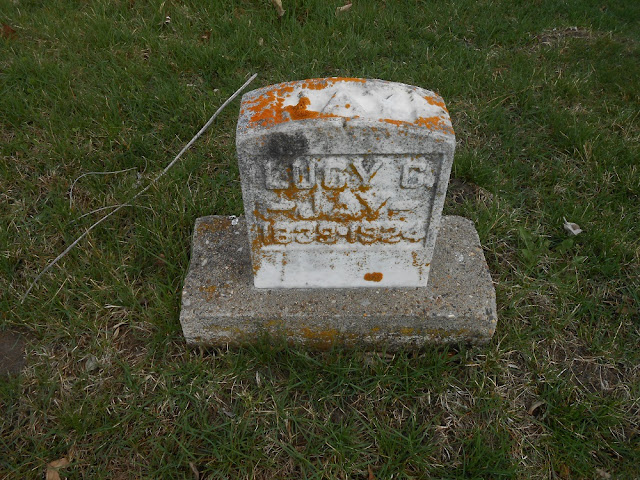 Very interesting reading this history as Elizabeth Jay Davis is my great grandmother, Joseph Jay being her father. Most of what I know is through “family lore” so it was most interesting to have the stories confirmed with blanks filled in. I actually have a flag belonging to Jospeh Jay which I’m told he had during the Civil War, along with his sword and a small ladies pin containing his picture which may have been worn by his wife while he was away at war or it could be a mourning pin, although it’s not a tropical appearing mourning pin.
Thank you!