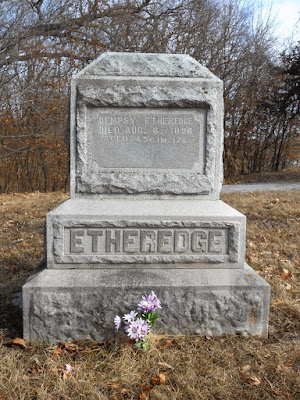 I've written before about John Faith, founding editor of The Chariton Democrat, and his fondness for sensation and outrage. John founded The Democrat (now The Leader) in 1867 and was its editor and publisher until 1871, when he left town.

As Christmas 1869 approached, an aunt of mine (by marriage) --- Sarah (Larimer) Etheredge --- got tangled up in an affair that gave Mr. Faith's head an opportunity to explode all over the news pages of The Democrat. I have no idea what eventually became of Sarah, but that's the tombstone of her husband and my uncle, Dempsy Etheredge, in Bethel Cemetery at left. They had not yet married when the incident reported upon as follows in The Democrat of Dec. 21, 1869, occurred:

Considerable of a sensation was created in town last Friday morning by the discovoery of the fact that women and wine had played the devil with one of the medical fraternity of this place, and brought sadness and disgrace upon two households, at least. Dr. Newton Park, a homeopathic physician, came to town during the latter part of the summer, bringing his wife, an intelligent women, with him, and they went to housekeeping, everything going apparently smoothly and satisfactorialy.

The doctor had many calls for his professional services, and for a time he seemed to prosper; but he couldn't stand prosperity. He felt good, handled plenty of money, and indulged freely of the wine that flows so abundantly in this town. In fact he indulged so freely and to such excess that his drinking habits soon came to be a subject of general remark and he was often seen to be in a "weaving way."

It also appears that he was wont to look with lustful eyes upon women with whom he had no professional business. In short, he speedily acquired the reputation of "a fast man."

Miss Sarah Larimer, living four or five miles from town, was employed in the family of Col. Dungan as a domestic. There is not a more attractive or handsome woman in the county than is Sarah. She is of good size, "plump as a patridge," about 18 years old, and perfectly developed. In short, she was just such a woman as could lead estray any man who is not iron-clad, but she has always borne the best character, and never a breath was uttered derogatory to the fair name that was given her by all who knew her. She was, perhaps, imprudent in some things, as inexperienced and unsophisticated girls generally are, else she could not possibly have fallen into the meshes of the man who has deserted his own wife and eloped with her.

It seems that Col. Dungan's family was the first to surmise that there must be something wrong, as this day two weeks ago they informed Sarah's sister that they were alarmed for her safety. The sister told the father what she had heard. He doubted the correctness of the story, but next day he received a letter from the Colonel, which brought him to town and he compelled Sarah to return home with him.

Of course, she desired to remain, and delcared her purpose of returning to town. She made several ineffective efforts to leave home, but she was so closely watched by her father that she seemed for a time to abandon the idea. Once, she slipped out of the room, and broke for the barn, but her father caught her after a short race and brought her back. It is now believed that the man of little pills lay hidden in the barn, awaiting an opportunity to see her.

Mr. Larimer is also informed that he had a hired horse and buggy awaiting him in the timber all day of last Thursday a week ago. On Thursday morning of last week, however, Mr. Larimer was compelled to leave the house and go to the timber after wood, little fearing that his daughter would take advantage of his absence and decamp. Shortly after he had gone, she declared to her mother her intention of leaving, but her mother coaxed, begged, and tried to compel her to remain. She fought her way to the door, and once out, she was free, as no one was near who could detain her.

When her father returned, he saw by her tracks that she was going in the direction of Chariton and concluded that it was useless to follow her, as he probably would not find her. She is supposed to have come to town on Thursday, and was secreted by her paramour until Friday night, when he hired a livery team of Capt. Robison, for the purpose, as he said, of going to Knoxville.

His wife was the first to mistrust what had taken place, and her inquiries after him, on Saturday, revealed the fact that he had probably deserted her and left for parts unknown. On Saturday, Capt. Robison swore out a warrant for him and started in pursuit.

We have no language that is severe enough for comments upon the villainy of the wretch who would thus desert his lawful wife, and bring shame and disgrace upon an entire family. It seems that his intercourse has been going on with her for some time, and he boasted that he had accomplished his purpose with Sarah by administering drugs, declaring that he would marry her if he had to kill somebody else. As for the poor girl, we can say nothing, except to point her out as an example, and bid others to beware of men who peddle little pills. We are also informed that the doctor had a confidant and confidential friend in the scheme, and as soon as we get the statement into proper shape, we shall proceed to shake him up. He needs it on general principles.

LATER --- The doctor returned to town about midnight on Saturday, and Capt. Robison returned in about half an hour afterward. The doctor stated that he had been to Corydon and Garden Grove, and as no one is to be found to contradict the statement, we know nothing to the contrary. But he failed to bring the woman with him, and after remaining secreted in town until Monday morning, he left again as mysteriously as he had come, and, it is thought, to join the woman at some designated place. He took his medicines and cases with him, and sold his horse and buggy to Miskimmons & Deyo, butchers, to whom he was owing a large bill. Nothing has transpired to throw any light upon the matter, and it is presumed that the doctor and the unfortunate woman whom he seduced have migrated to parts unknown. But it is hoped that something will result to bring the unmitigated scoundrel to a speedy account for his outrageous conduct. His deserted wife, we understand, will immediately take steps to procure a divorce.

John published a follow-up in his edition of Dec. 28, but as of that date neither the doctor nor Sarah Larimer had resurfaced. Faith did have this to say about Dr. Park, however:

As for Dr. Park, we have learned something of his former history, from which it appears that instead of being a regular homeopathic physician, he was merely a perambulating quack, claiming as his home New York, Albany, Chicago, St. Louis and New Orleans, promising to cure all kinds of chronic and incurable diseases, and claiming to be "one of the most successful physicians no practicing in the West." Mrs. Park left town on last Wednesday evening, and returned to her parents. The doctor left a large number of debts behind, and it seems that his deliberate and premeditated intention was to swindle whatever he could. We shall keep the readers of The Democrat posted as further facts come to light.

Despite the promise of "further facts," there were no further reports in The Democrat, so we have no idea what became of Dr. Park or the unfortunate Mrs. Park. James and Mary Larimer --- Sarah's parents --- and their family seems to have moved on to Kansas, perhaps in 1870.

But Sarah resurfaces in 1872, when she marries my uncle, Dempsy Etheredge, on July 18. Dempsy was a railroad man, then beginning to work his way up toward the position of conductor on the C.B.&Q. line across southern Iowa. Their first home was in Russell, but then they moved to Ottumwa. Both Dempsy and Sarah were 21 at the time of their marriage. There were no children.

Uncle Dempsy met his end 24 years later, during the night of Aug. 5-6, 1896, when he fell from a flat car under the wheels of the next car of a westbound train near Murray while doing double duty as both conductor and brakeman. He died of his injuries early Aug. 6 in Creston, where the train crew had taken him for treatment.

After funeral services at the Russell Presbyterian Church, Dempsy was buried in the family cemetery, Bethel, and a fine stone erected to mark his grave.

Sarah was living as a widow in Ottumwa as late as 1903, but I've not been able to find her after that. The most likely explanation is that she remarried and moved on.

In three issues of the Ottumwa on April 4, 6 & 7, 1903, there are advertisements where a Mrs. Etheredge of 115 S. Marion St. is selling her furniture "must be sold at once". This address matches Sarah Etheredge in the City Directory. On 14 Apr. 1903, in Nodaway County, Missouri, a Sarah Etheredge married an Edward G. Abbott. Seems like quite a coincidence that Sarah would need to sell her furniture the week before this wedding, but the marriage license lists Sarah as a resident of Portland, Oregon. I will investigate this farther.