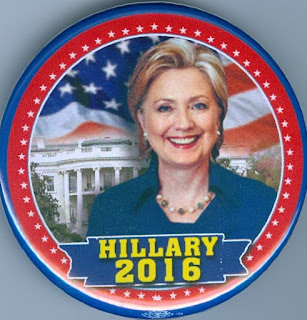 So I'm off to the Lucas County Democratic Convention this morning with head held high and wearing my "Hillary 2016" button, which I've had since 2012. The pre-convention literature promises a complementary Hillary button from my precinct captain, but I won't need that one.

This one was a gift from Martin Buck --- but don't worry. He gave me a Romney button, too. So far as I know his political faith remains firmly in the dead elephant camp.

But I'm easy --- so if Bernie Sanders ends up as the Democratic candidate, I'll vote joyfully for him, too.

I just think he's a little old --- although it is refreshing to see that many of his most enthusiastic backers are younger Democrats.

Another reason I like Sanders: He's not a religious guy and, so far, has not pretended to be. Historians generally consider Thomas Jefferson, Abraham Lincoln and Andrew Johnson to have been our least religious presidents. It's high time for another. And as far as I'm concerned a non-observant Jew would fill that bill nicely.

Actually, I'd vote for an observant Jew, too, or for that matter, a Buddhist or an atheist. Any of the above would end that absurd debate on the right about whether or not the White House incumbent is a real Christian. With that out of the way, the orthodox faithful could get back to obsessing full-time about what other people do in bed and, if the nature of current Republican squabbles is any indication, penis size.

And I'm still backing Hillary --- in spite of her absurd assertion the other day (subsequently apologized for) about the relationship between Ron and Nancy Reagan and H.I.V./AIDS research.

“It may be hard for your viewers to remember how difficult it was for people to talk about H.I.V./AIDS back in the 1980s,” Mrs. Clinton told MSNBC. “And because of both President and Mrs. Reagan – in particular, Mrs. Reagan – we started a national conversation, when before nobody would talk about it. Nobody wanted anything to do with it.”

It's hard to say what got into Mrs. Clinton --- just plain old ignorance, I'm guessing.

But those of us who were there, especially those of us who are queer survivors, should recall that although the Centers for Disease Control and Prevention identified the disease in 1981, President Reagan didn't mention H.I.V. or AIDS until 1985 and didn't give a speech about it until 1987, by which time an estimated 40,000 --- mostly young gay men --- had died.

And it's absurd to suggest that even then Reagan, or Nancy --- or for that matter a majority of heterosexuals --- ever were really focused on H.I.V./AIDS, although many, especially Christians, found time to announce that those gay guys were getting what they deserved. That changed a little when it became obvious that H.I.V./AIDS was an equal-opportunity killer

In a very real sense, it was gay men --- many of them dying --- and lesbians who organized, informed themselves, yelled, screamed, protested and demanded who were able to pair up with straight allies and turn the conversation toward a cure. The Reagans had nothing to do with it. Nor, for that matter, did Mrs. Clinton. Or Bernie Sanders.

Both Clinton and Sanders are allies now, however --- and no Republicans are. That's important to remember.