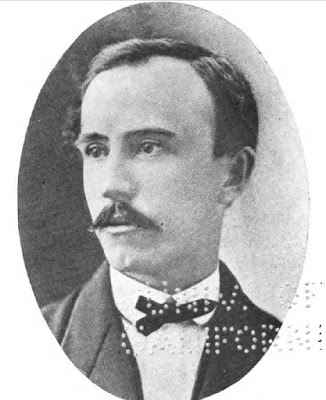 Politicians and partisans of the 2016 election cycle seem to think they've cornered the market on artful name-calling, but compared to two young post-Civil War Iowa journalists --- they're rank amateurs. John V. Faith and Clint Parkhurst (left) --- now there were masters of invective.

I've written a little about John before --- and will write more another time. Born about 1840 in Holmes County, Ohio, he landed at Birmingham in Van Buren County, Iowa, with his parents and siblings sometime between 1855 and 1860. There, he learned the printer's trade and, as the nation lurched toward civil war, developed into a Copperhead. Copperheads were northerners sympathetic to the southern cause.

Rather than involve himself physically in the conflict, however, John avoided military service entirely during the war by moving rapidly from place to place, perfecting his art --- and sharpening  his poison pen.

During 1867, he landed in Chariton with a Washington Hand Press and some type and founded The Chariton Democrat. John was abrasive and his writing some of the most outrageously racist ever published in Chariton. When not throwing the "n" word around, he attacked in print everyone who looked at him cross-ways and finally, about 1870, succeeded in driving himself out of town. He tried Osceola on for size, but it was not a good fit.

And so, in 1871, John loaded up his press, type and family and headed for his wife's hometown, Elyria, Ohio, where he founded the Lorain (County) Constitutionalist.

Clint (Henry Clinton) Parkhurst was a native of LeClaire, Scott County --- born during 1844 into a prosperous family and well-educated. Just after he turned 17, Clint enlisted in Co. C, 16th Iowa Volunteer Infantry. As a soldier, he saw considerable action and was wounded twice. Captured during the Atlanta campaign, he spent time in the notorious Andersonville prison.

Parkhurst seems to have been a brilliant young man who noticed everything, but preferred to express himself in poetry. After his discharge in 1865, he returned to the Davenport area and began to write for various newspapers. As John V. Faith and his family were heading for Elyria, Ohio, Clint was holding forth at The Rock Island Argus.

At some point, these two journalists with wildly varying political outlooks had encountered each other --- and hadn't enjoyed the experience.

The editor of the Davenport Democrat set off the in-print tiff between Faith and Parkhurst during 1871 by noting in one of his editions that "John V. Faith, whose faith is bounded by a V, has left the Iowa newspaper field and started the Constitutionalist at Elyria, Ohio." Apparently aware of the tension between John and Clint, he then twisted the knife a little, adding, "He is negotiating with Clint Parkhurst to edit it for him."

Clint responded in the next edition of The Argus as follows: "There is not money enough in Elyria, or in the county of Elyria, or in the State of Ohio, to hire us to have anything to do with such a mean, contemptible, pusillanimous, cowardly, drunken, pocket-picking, pestilential, vile, low-flung, treacherous, sneaking, degenerated, villainous, scurrilous, blasphemous, thieving, lying, pilfering, crawling, vulgar, venomous, lick-spittle, fraud, vagabond, dead-beat and mountebank as Jno. V. Faith. Iowa has spewed him forth in disgust. There are hundreds of better men in Sing Sing."

John responded as best he could in an edition of The Constitutionalist, but fell short of Clint's masterful outburst:

"The recollection of an injured business, a bad name, worse odors and the loss of about three hundred dollars makes us feel certain that we don't want to have anything more to do with Clint Parkhurst. He has a way of receiving money and failing to account therefor, of collecting what doesn't belong to him, of walking off and leaving bills for others to settle, that we do not like --- to say nothing of his bad moral character and bad habits, such as getting so beastly drunk as to render it necessary to stow him away in a wood closet for half a day at a time.... We are rather gratified to see that he remembers us. He came upon us without enough money to buy his dinner, and to our great loss, was fastened to us like a leech for six long weeks. When we finally succeeded in getting rid of him, we confess we made it warm for him. His proper place is in the penitentiary, and if he had gotten his deserts he would have been there three years ago.... Abuse from such a notorious blackguard and dead-beat as he is, is the best of praise in the estimation of decent people."

That seems to have been as far as the verbal duel went --- too much territory separated them for actual shots to be exchanged.

John Faith does not seem to have had an especially happy life after this. He bounced from Ohio to Tennessee, then back to Ohio --- where his wife died after attempting to kill both herself and their deaf-mute daughter. He then landed back in southwest Iowa, where more efforts to start viable newspapers were made. He ended his days at age 53 in Chicago during 1893 while working as a printer there.

Clint Parkhurst's life was longer, but perhaps even more chaotic. He became a talented vagabond, roaming the country --- even the world --- reporting, writing, losing his manuscripts, getting tangled up in the 1906 San Francisco earthquake, all the while getting, as John Faith had put it, "beastly drunk" at inopportune times.

He had found refuge at the Iowa Soldiers Home in Mashalltown by 1913, when he was in his late 50s, but then vanished. He resurfaced in Nebraska where, during 1921, he published what remains his best known work, "Songs of a Man Who Failed," some 300-plus pages of biographical poetry.

Late in life, he returned to the Iowa Soldiers Home where he died during 1933 at the age of 89. He is buried in the cemetery on the grounds of the home.

Is the picture above of John Faith, very interesting to read as it appears the rest of his familk were pro-union and quite a few fought in the war on the Union side.

Is the picture above of John Faith. InterestING about his views as my research on the rest of his family indicates they were anti copperhead's and many fought with the Union in the civ war.