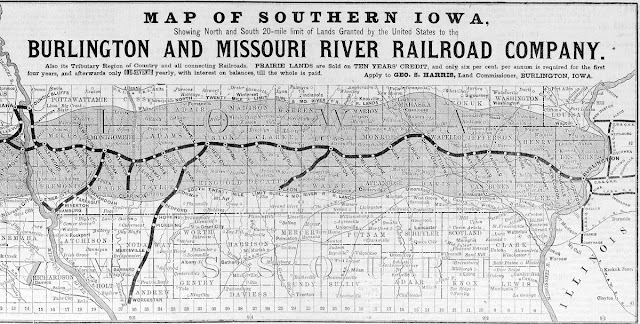 Few things changed the nature of life in Lucas County --- and Iowa in general --- more than the spread of rail lines across the state in the 1850s and 1860s.

The first Burlington & Missouri River Railroad locomotive pulled into Chariton during early July, 1867; by Jan. 1, 1870, the Missouri River had been bridged; and by 1873, passengers who climbed aboard trains in Chariton might cross the Big Muddy at either Plattsmouth or Council Bluffs/Omaha, depending upon where they were going.

The chronology here is based upon a short history of the B.& M.R. embedded in the official history of the Chicago, Burlington & Quincy Railroad, which acquired the B.&M.R. by lease in 1872 and outright in 1875. After multiple mergers, the Burlington, Northern & Santa Fe now operates on the B.&M.R. line across southern Iowa and the C.B.&Q. is no more.

Incorporation: Incorporated under the general laws of Iowa by Articles dated January 15, 1852, and filed with the Secretary of State of Iowa, January 23, 1852, as The Burlington and Missouri River Rail Road Company. Article 10 provided as follows, to wit: "The object of this Corporation is to construct and use a Rail Road extending from Burlington to the most eligible point (amended in 1869 to read 'points') on the Missouri River, and along the most eligible routes."

Organization: Effected at Burlington, Iowa, January 17, 1852, by election of directors and officers.

Between 1860 and the fall of 1864 all construction was suspended because of the Civil War.

Operation: That part of the main line of this company between Burlington and Mount Pleasant was operated immediately after its completion (June 17, 1857) by this company, and continued operation as the various sections of the main line were opened after that date and until December 31, 1872.

Lease to C.B.&Q.: Of date December 31, 1872, this company leased all of its railroad property, and assigned its leasehold interests in other lines of railroad, in perpetuity, to the Chicago, Burlington & Quincy Railroad Company.

Deed to C.B.&Q.: Of date July 31, 1875, this company conveyed to the Chicago, Burlington & Quincy Railroad Company all of tis property and franchises and including its several leasehold interests, its said railroad begin described as follows, to wit:

'...its said railroad situated in the State of Iowa extending from Burlington on the Mississippi river to Plattsmouth, on the Missouri river and all branches connected therewith owned or controlled by it, including the Burlington and Missouri Railroad known as the Chariton Branch, the Creston Branch of the Burlington  Missouri River Railroad, and the Brownsville and Nodaway Valley Railroad ...."

And there you have it. The "Chariton Branch," constructed in 1871, connected Chariton and Leon (36.72 miles), where connections allowed transport of passengers and freight to and from St. Joseph, Missouri. The "Indianola Branch," connecting Chariton with Indianola, came along later.

The route map here dates from 1873 and was lifted from a larger broadsheet publication directed at immigrants.

During 1856, the U.S. government transferred to Iowa public land along the railroad lines west across the state. Iowa, in turn, conveyed --- as an incentive to build --- this land to four rail companies (including the B.&M.R.) then working their way across the state at a rate of so many sections of land per mile of track completed within six miles on either side of the line. A similar arrangement was made in Nebraska.

Since much of the land in eastern Iowa, including Lucas County, already had been purchased by settlers or speculators, the bulk of railroad land sales were farther west. This publication and others like it were distributed widely in the East to give prospective settlers (and land purchasers) directions for reaching Iowa and what to do to examine and purchase land after arrival.
Posted by Frank D. Myers at 6:20 AM