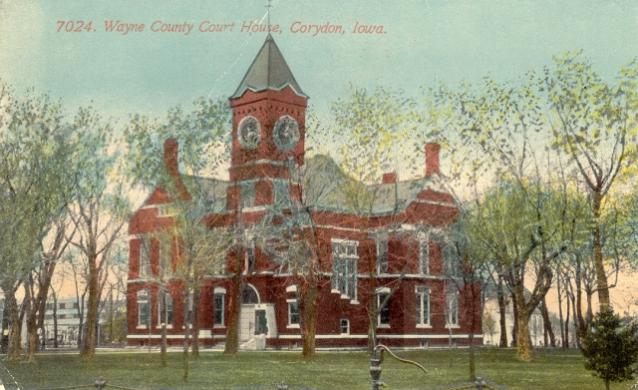 Bad luck: Lucas County's lovely brick 1858 courthouse fell apart in the early 1890s due to the folly of its builder (and the supervisors, who had approved his plans involving a wood rather than stone or brick foundation).

Good luck again: County residents approved with relatively little fuss in 1892 the $60,000 bond issue needed to finance our current seat of government, built during 1893, finished and dedicated during 1894. And it's held up well.

But things haven't gone quite so smoothly for our neighbor to the south, Wayne County, and its county seat, Corydon.

Although Corydon is located in the center of the county, pesky Allerton grew up right next door to the southwest and became a rival not only for economic superiority but also as a county seat location.

And rather than developing just one dominant town, Wayne County produced several contenders. In addition to Allerton, there was Seymour, down in the southeast corner of the county, disbarred by location from being a serious contender for county seat but certainly very prosperous in its time with a grand square that rivaled Corydon's. Humeston grew to comparable size in northwest Wayne County and prospered. And Lineville, way down on the Missouri border to the southwest, was a very viable city in its time, too.

Contention between these towns was among the factors that left Wayne County's government a homeless nomad from the early 1870s until 1891, pitching its tent in various rented quarters around the Corydon square.

Like Lucas County's first courthouse, Wayne County's first was a log cabin, too, replaced in 1856 at a cost of $600 by a frame structure constructed by William F. Lancaster and John Davis. A jail was built the same year. But the inadequacies of both became obvious within 20 years and by the early 1870s, the need for a new courthouse was pressing.

Here's a snarky description of Wayne County's public buildings, published in The Seymour Sentinel during December of 1873 and republished in The Chariton Patriot on Dec. 31 that year:

"The ratties to public buildings in the State must certainly belong to our county seat, Corydon. The edifice in which our judges deal out justice is one to be respected on account of its old age. It is one of the most ill-appearing, dingy, dilapidated and neglected old shells that any set of court house rats ever attempted to inhabit. During summer seasons agile spiders of numerous species festoon the ancient walls with their webbed draperies to which the dust of ages cling, and the gentle zephyrs fan them into a shimmering motion that may be pleasing for its builders but disgraceful to any county who will indulge these insects in such a folly. Yet these spiders, as the end of the seasons busts up the fly business and they are wafted from existence at about the same time, always leave the only ornaments visible in this old owl roost, that, perhaps, today, is scintillating with a collection of the hoary frosts that are hurled through its cracked sides. Then there is the jail. And such a jail. It will soon be necessary for Sheriff Wright to pay his prisoners about two dollars per day in order to induce them to stay in his custody. As it is now, we understand, to hold his prisoners, he is compelled to follow them into their cell, and then lock the door and throw the key out through the grate and then amuse himself by pulling them back as they attempt to crawl through the holes."

County supervisors had begun attempts to convince taxpayers to fund a new courthouse during 1869, but were rebuffed soundly. An even more decisive "no" vote was recorded in 1872. Not long thereafter, the old courthouse was abandoned.

In 1874, the supervisors decided to put the rival claims of Corydon and Allerton on the ballot, hoping that a decisive vote for one or another would lead to financing for a new seat of government. Wayne Countyans voted 1,467 to 927 to keep the county seat in Corydon, but even more decisively declined to finance construction of a new courthouse during both 1875 and 1879.

These fruitless efforts continued through the 1880s. By this time it was becoming downright embarrassing to be a courthouse-less county seat. Final efforts were made during 1887 and 1889 special elections --- and failed.

The supervisors proposed in both 1887 and 1889 a $40,000 building. The editor of The Humeston New Era opined just before the 1887 vote, however, that this was way too much money to spend: $25,000 would be more like it. And that residents of Corydon should pay proportionally more to build any new courthouse since they would benefit most from it. His views probably reflected those of the countywide majority.

The supervisors took some decisive action on their own in 1889. Before the final election, they entered into an agreement with William Hughes, then preparing to rebuild the Hughes Block after a disastrous southside fire, to lease for $1,100 a year five rooms --- some with vaults --- in his new building for county offices and records. The lease could be terminated if and when county voters approved funds to build a courthouse.

That didn't happen, and after the 1889 election the supervisors decided --- with the promise of $17,000 raised through private subscription from Corydon interests --- to proceed without a special levy to build a less expensive building. The supervisors committed $5,000 from general revenue to the project and during December of 1889 awarded a contract for $22,000 to E.A. Rea.

The building was completed and equipped for about $25,000 during 1890 and by January of 1891, Wayne County officials finally had a permanent home --- a good-looking brick structure that was less elaborate than courthouses built elsewhere during this era, but serviceable.

The old brick courthouse served Wayne County for about 70 years, but eventually began to deteriorate --- perhaps in part because it had not been built for the ages. It became structurally unsound, was evacuated, demolished and during 1964, after a period of exile, county officials were reunited in the current courthouse, a pleasant building that I've always liked --- although it lacks 19th century grandeur.

Courtroom furniture and fixtures from the old building were relocated to Prairie Trails Museum and you can take a look at them there.