Clarkson C. Burr (1861-1939), a genial man who for many years was Lucas County's preeminent weather observer, apparently was a talented story-teller, too --- if the manuscript he left behind of a talk prepared for a turn-of-the-20th-century Old Settlers Association meeting is any indication.

The undated manuscript came to the Lucas County Historical Society some years ago from the Chariton Free Public Library, which had been its custodian since the county's original historical society folded more than a century ago. The manuscript is undated, so I've not yet tracked down the date of its presentation, but it would have been shortly after 1900.

It is difficult to imagine now a time when life and property in Lucas County were under constant threat from prairie fires, but that certainly was the case as late as the 1870s, and Burr recalls those days and some of the troubles they caused. Relying upon oral tradition, he talks about several deaths from "natural causes" --- prairie fire and drowning --- in Warren Township, immediately southwest of Chariton. I'm guessing that no one in the audience nodded off while he was speaking; he knew how to grab and hold an audience's attention.

Clark Burr was a son of Milton J. and Alcinda (Bond) Burr, Quakers who came from Belmont County, Ohio, to Warren Township in 1861, the year of his birth. So he would not have remembered any of these incidents, but no doubt heard about them from his neighbors --- he died of a heart attack at age 78 on the farm where he was born. Here the text of his history of Warren Township:

Sam’l Francis is supposed to be the first permanent settler in our township. He entered land here in 1849. Peter Waynick in 1851; followed by Ezra James in 1852; S. D. Waynick in 1853; G.W. Hopkins in ’54 and G.W. Mitchell in ’55. In the year 1850, a man and his wife were moving west, with wagon and ox team; near five miles southwest of Chariton, on land now owned by S.D. Waynick. They saw a prairie fire coming; the oxen became frightened and turned back, running north; the man followed the team, but his wife became confused and was burned to death in the public highway.

In 1862 a most disastrous fire swept over this part of (the) county, leaving desolation and ruin in the path, and in some places destroying human life. The fire started near Osceola and it is said the fleetest horse could not keep out of its way as it was accompanied with a strong N.W. wind. In the path of the fire nothing was saved, but the settlers for miles around fought it, and by heroic effort saved many a cabin that was in imminent danger of destruction. A family named Burley, near west township line, escaped from fire, but saw his house, crop and stock entirely destroyed.

Near this time, possibly in 1863, a vast drove of Texas cattle passed through here, still remembered by many citizens. The drove was continuous for two miles, accompanied by “herders” who had complete control of them ususally, but an occasional stampede would give sudden animation to their lives of usual monotony.

In an early day the old “Brick” school house was a place of much interest. Here the children for two or three miles in every direction would come for instruction. Near the schoolhouse was a small creek that usually had very little water in it. On the third day of a term of school taught by a Miss Mitchell of Chariton a sudden storm caused the creek to overflow and carry away the floor of the bridge; when school was dismissed, the bridge still being covered with water, two children of Wm. Chance, walked as they supposed on the bridge and fell into the foaming mass of water; one child was saved by clinging to the brush until help arrived, the other was taken out dead.

The difficulties of the early settler is hard for us to realize. To get a grist of corn or wheat ground, necessitated a trip to Albia. About 1860 a corn mill was started at Bethlehem, in Wayne Co., and S. D. Waynick related to me an incident in regard to it. He said one morning he loaded up 14 bushels of corn, and started for the mill with the hope of getting home by the next day; upon arriving at Bethlehem found mill broke and could not start for several days. He had provision for one day, but no money; after telling his trouble to the miller, it was finally arranged by Mr. Waynick chopping wood for the miller and made his expenses in that way.

Near this time a saw mill was started by Lot Curtis and M. J. Burr. Mr. Waynick relates of having lumber sawed there for his house; he then went to Eddyville and bought shingles for the roof at $9.50 per thousand. He also spoke of the price of hogs near this time as $1.90 for cwt. Wheat flour was something almost impossible to obtain; it truth it was about as scarce as money. One day a farmer drove up to the old Vansickle store in Chariton, and bought a sack of flour; he had no box on his wagon, so placed the flour on the running gears and stepped back in the store for something; when he returned he found his flour in the possession of an old hog, that had pulled it from the wagon and scattered it in the mud; under the circumstances that man’s loss could hardly be computed in dollars and cents.

At a very early date a tragedy occurred near the Wayne Co. line, that perhaps should go into history. A widow, with a family of children, lived alone; one son almost a man, one day went hunting and failed to return. He was gone and no trace of him could be found. He disappeared in early winter, and the next spring, his mother was one day getting a bucket of water from the creek near the house, when she was horrified to see the body of her lost boy; he had evidently been drowned and lay under the ice all winter.

Briefly, this gives us an idea of the condition of our country as it was a half century ago. The Indians was a frequent caller by day, and the wolf howled around the cabin door by night. Comparatively, we now have little to do but enjoy the pleasures of life. Some may not consider our early history of (much) value, but our children will one day read it with interest and our children’s children will consider it a priceless heritage.

Of course its difficult to substantiate some of these stories of early days. Lucas County had no regularly published newspaper until 1857 when The Patriot came along, and its earliest files have vanished. So there were no reporters on hand to record the details, and I've been unable to track down more about the drownings of either the Chance child or the unfortunate young man who died in a creek near the Wayne County line.

But here's a somewhat different account of death by fire on the Warren Township prairie.  You'll find this on Page 644 of Dan Baker's 1881 History of Lucas County, Iowa (Des Moines: State Historical Co.). Although the details differ, I suspect it's the same event:

"It will be remembered that the first clerk of the board of (Lucas) county commissioners was William H. Moore, chosen at the first meeting, held August 10, 1849. In 1852, he determined to move to Missouri; and on one fine October day of that year, he started on his journey with a team and wagon, in which were his wife and one child, together with some cattle, which he was driving along after. After crossing a stream, some five miles southwest from Chariton, and ascending the opposite bluffs, Mr. Moore saw the prairie on fire, and the leaping flames sweeping toward them. He at once directed his wife to turn the team and retrace their course over the stream, while he was attempting to turn his cattle back, to get the team and all back over the stream; but, before he could accomplish this, the flames in their mad fury, overtook them. They first dashed upon the helpless child and enwrapped it in fire, when its mother, in her wild frenzy, seized it and leaped from the wagon; but, alas! Notwithstanding the heroic efforts of the husband and father the little one met almost instant death upon the ground, and the wife was burned well nigh unto death. The remains of the child, and the dying woman were taken back to a room at the court house where she survived some ten hours only. Thus, the wife and child of Mr. Moore met a terrible death. They went to their rest in the grave, while he, mournful and alone, soon found a home amid other scenes."

Other sources tell us that William H. Moore was indeed Lucas County's first clerk. As it happens, he also was Chariton's founding postmaster, appointed December 26, 1849. And neither Moore nor his family appears in census records later than 1850.

But the 1850 census suggests that his family was larger than Baker's story implies. In that record, William H. Moore, 37, a native of Ohio, and his wife, Mary, age 32, were enumerated with six children --- Madison, 13; Sarah, 12; Isabella, 8; William, 7; Albert, 4; and Alvin, 10 months. So perhaps there were other children present that long-ago day on the prairie to witness the deaths of their mother and brother. Most likely, we'll never know.

If the Baker story is accurate and Mary Moore did indeed die at the courthouse, then she would have been buried at either the cemetery southwest of the square on Columbus School hill, or in Douglass Cemetery, just southeast of town. Whatever the case, there are no marked graves. 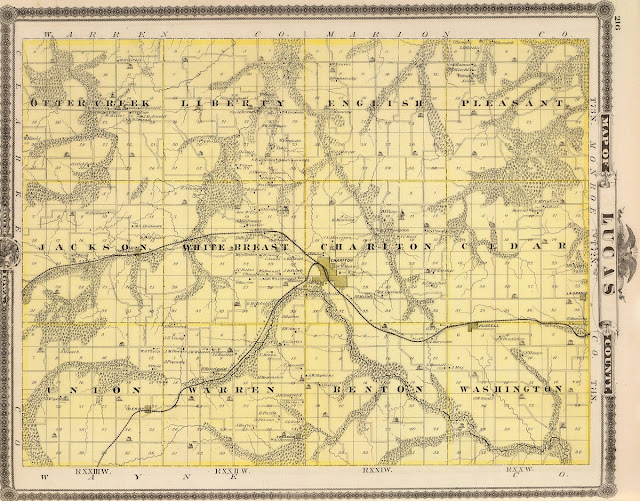