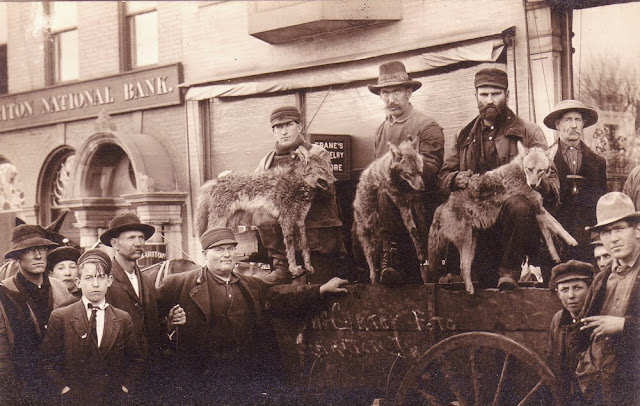 I wrote earlier in the week about the great Washington Township wolf (actually, coyote) hunts of 1910 --- part of a county-wide phenomenon involving hundreds if not thousands of men. There had been wolf hunts before and there would be wolf (and fox) hunts later, but for some reason 1910 was the peak year.

The photos here, also from the Lucas County Historical Society collection, were taken on March 15, 1910, on the west side of the square in Chariton at the conclusion of the second and biggest Lincoln Township hunt, an event involving an estimated 500 men that had converged on Highland School east of town earlier in the day. Highland School was located a half mile north of what now is U.S. Highway 34 on high ground that in 2016 offers a view west over Lake Morris, then just a creek valley.

Although I don't know who was who, the hunters holding their trophies here are Amos Homsher (the younger), of Chariton, Jim Wright, of Cedar Township, and Charles Foster, I believe of English.

The Lincoln hunts were the closest conducted to Chariton and, therefore, the most thoroughly covered by Chariton newspapers. So I'm going to transcribe a sequence of short articles this morning that demonstrate how they were organized and conducted.

The first of the Lincoln Township hunts, held on Tuesday, March 8, 1910, was announced in The Chariton Leader of March 3 as follows:

"The citizens of Lincoln and adjoining townships have decided to hold a circular wolf hunt or drive on Tuesday next, March 8, the territory to be surrounded extending from the Chariton river on the south to the north line of Lincoln township on the north and from Cedar creek on the east to the west line of Lincoln township. Let every one take part by going to the line at his nearest point where the following captains will form the lines: F.M. Holmes, Fred Post and Charles Shirer on the east; Hupp Brothers, Simon and Perry Scott on the south; Lawrence Campbell, G.B. Van Arsdale and Wm. Baxter on the west; Chas. Foster, Jim McDowell and the Smith brothers on the north. Lines to be formed and ready to march at 9 o'clock a.m., aiming to close up at a point in the vicinity of the Highland school house. Rifles and long-range guns forbidden; responsible parties may carry shotguns. Dogs not allowed inside the circle. Wolves have been seen daily inside these lines and on one occasion three were seen in one bunch."

Here's a report on that first Lincoln Township hunt published, along with plans for the second, in The Herald-Patriot of March 10, 1910:

"The Lincoln township wolf hunt Tuesday was a most enjoyable affair. Fully three hundred men and boys participated, gathering toward the Highland school house from all corners of the township. Six or eight wolves were sighted during the hunt, but no shooting was allowed until the roundup, and by that time only two wolves were inside the ring. One of these was shot by Roy White, and the other was wounded, but escaped. The bounty will be $5 for the captured wolf. The fun more than paid for the trouble of the hunt, and if the wounded wolf will but tell his mates that they better leave the county, the benefits of the hunt will be still further increased. The Lincoln township wolf hunt will be repeated next Tuesday, March 15, with the same leaders, the same places for starting, and the same round-up, near the Highland school. Hunt will start at nine o'clock a.m. Everybody bring a shotgun, but no dogs allowed. Hunters' licenses are not necessary. Anybody can join the hunt. A meeting will be held at the court house Saturday afternoon at 2 o'clock to complete the arrangements."

And finally, here's a report about the hunt of March 15, published in The Herald-Patriot of Thursday, March 17:

"The first wolf hunt in Lincoln township, about ten days ago, resulted in killing only one wolf, though seven or eight were scared up. the lines were not drawn closely enough, and many escaped. Last Tuesday the hunt was repeated, this time over 500 men taking part in it, many of them being from Chariton, and the lines were formed along the four sides of the township, and slowly drew toward the center. As a result, six or seven wolves were sighted, and three were caught in the human net and shot.

"They were brought to town and exhibited by the lucky marksmen, Amos Homsher, Jim Wright, of Cedar township, and Chas Foster, and after the bounty of $5.00 each had been secured from the county auditor, the bodies were put up at auction for their hides. I. Assman, the fur dealer, bid them all in at $5.00 apiece, which swelled the receipts of the hunt to $30. This sum was expended in having a large number of pictures taken of the three wolves as they appeared on exhibition, and these pictures will be distributed to heads of families who participated in the hunt. The pictures can be had at Beaman's drug store.

"Another big wolf hunt is being planned for Warren and Benton townships next Tuesday. There are still said to be several wolves not far from town, some claiming that a band of fifteen or sixteen wolves has been committing depredations there. A meeting will be held in the assembly room at the court house next Saturday afternoon at two o'clock to plan the hunt.

"Later --- Still another wolf hunt is being planned for English township for next Tuesday. The south line will be the south line of the township, the west line will be along Little Whitebreast, the east line along the east side of the township, and the north line about three miles north of Newbern. A meeting will be held at Newbern Saturday night at eight o'clock to arrange details. The round-up will be in the vicinity of the Cain church." 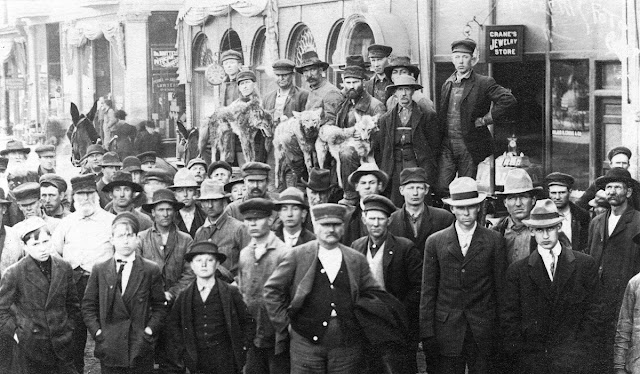 The photographs were taken just north of the alley on the west side of the square with the Manning & Penick Building and the Lockwood Building in the background.
Posted by Frank D. Myers at 6:03 AM