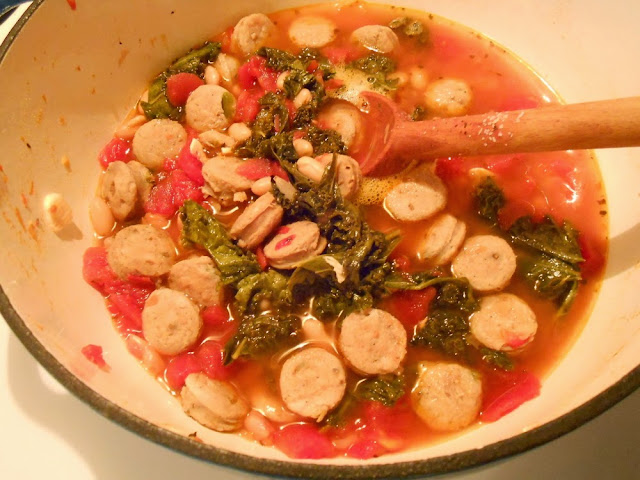 This is a recycled recipe, first posted here during 2014 --- but there's fresh snow on the ground this morning and the temperature is headed below zero overnight. It's a good day for soup.

The soup goes together easily, needn't simmer that long, is both tasty and healthy and doesn't produce a huge amount. I've already had one bowlful and have four more lined up in containers in the refrigerator to intersperse with other stuff during the next few days. Here are the ingredients:

I cook this in the Blue Beast --- a Lodge-brand dutch oven that requires two people to carry from place to place (well, not quite). The original recipe called for "Italian" chicken sausage, but I've been experimenting with other flavors and have been using apple lately because I like its faint sweetness. I'm also using home-grown garlic, so the cloves are very large --- don't worry about the garlic, its power dissipates after the initial sizzle in hot oil. And I don't use extra salt in this.

Last time I posted this, there was a little confusion about chicken sausage. You'll find this, four fat links per package, in the same case with hot dogs, packaged brats and other processed meats. Hy-Vee stocks two brands --- its own and another.

Anyhow, heat the oil to medium high in the pot then toss in the garlic (I slice mine thinly) and cook a little. Slice the sausage links and throw those in with the oil and garlic and brown.

Add the tomatoes, the beans (drained and rinsed) and the chicken broth. Rinse and tear into pieces the kale, discarding the stems, and stir in --- I use lots of kale. Bring the soup to a boil, reduce heat to medium-low, cover and simmer for at least an hour.

You're done! The soup can simmer longer; just be careful about dissipating the liquid. It reheats beautifully.