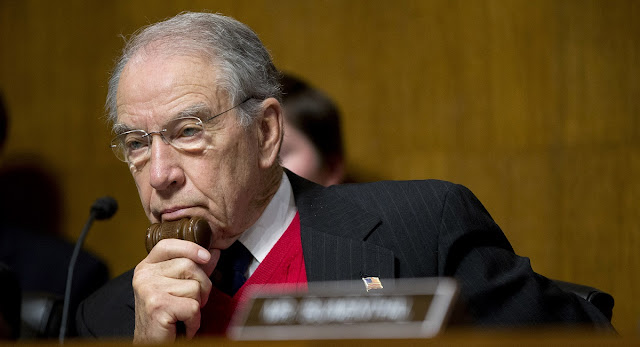 It's kind of hard not to feel a pang of sympathy for Iowa's senior U.S. senator, Chuck Grassley, who currently chairs the Senate Judiciary Committee. We're all getting older, and are afraid sometimes.

Grassley, now 82, never has been eloquent, innovative or especially memorable. But he's been dutiful --- making the rounds of all 99 counties year after year since 1981, when he took office. Unlike many other senators of both parties, he's rarely missed a roll call vote. Occasionally, he's perked up --- usually when he sensed that taxpayer funds were being misspent.

The role of fiscal watchdog has suited him. And his mediocrity has seemed suited somehow to a state that relishes mediocrity.

Now, as chair of the Senate Judiciary Committee, he's apparently decided to settle the issue of how he'll be best remembered --- by blocking a hearing on any nomination President Obama might make to fill the Supreme Court vacancy created by the death of Antonin Scalia.

The rule of constitutional law, and precedent, requires that sitting presidents nominate justices when a vacancy occurs, then the Senate considers that nomination and votes it up or down. The fact that a president is or isn't in the final year of his term is of no consequence. And since the Senate has the ultimate say, it remains in the driver's seat.

Grassley probably is feeling a little sheepish about placing partisan loyalty to further an obstructionist agenda before his constitutional responsibility --- even though he says otherwise, telling reporters he doesn't care how history views him. I doubt that.

But this is what he's been told to do and that's how he'll be remembered. Eighty-two years needn't weigh that heavily --- I know some who are remarkably "young" at that age. But not Grassley, poor old, sad old man.
Posted by Frank D. Myers at 6:18 AM

he is showing his true color he has vetoed more va bills than he would like you to no including the last lone over due pay rise for our armed forces !

I wrote to Grassley telling that I was ashamed to have been born and raised in Iowa because of his stance on this Supreme Court nomination. I have heard nothing - but as someone who no longer lives in Iowa, I don't expect to hear from his office.