Say you want to buy a Lucas County farm this spring, having deep pockets or the promise of alternate financing lined up. Chances are, you'll see it advertised somewhere and contact a Realtor, who with his or her staff will handle many of the time-consuming details for you. When you go out to take a look at the property, its boundaries will be clearly marked. Somewhere, there will be an abstract recording all previous transactions involving the land, commencing with the original patent. If you've got the cash, it's relatively smooth sailing.

That was not the case for pioneer Lucas Countyans, arriving on horseback or by wagon --- often with their families --- during the decade after settlement commenced in 1846. In fact, the survey of the county wasn't completed until late fall, 1847, and it was 1848 before land could be purchased. The nearest land office at the time was in Fairfield, where doors had opened during 1842.

Life got a whole lot easier during February of 1853, when the federal land office serving the southern district of Iowa was moved west to Chariton. Joseph Braden, a young man of 22, born in England and a former resident of Dubuque, arrived with the land office and went to work as clerk. He remained an employee of the office until 1858, when all of Iowa's district land offices were consolidated in Des Moines. By that time, he was registrar --- head of the office.

After that, Joseph went into business in Chariton and by 1897 was one of the city's most highly revered pioneers. Called upon to address the Sept. 7, 1897, gathering of Lucas County's Old Settlers Association, he covered many topics --- including the daunting task our ancestors faced when they set about purchasing for $1.25 an acre all the land they could afford, perhaps even a bit more. Here's a portion of his address, published in The Chariton Patriot of Sept. 16, 1897:

"In the year 1848 at the time the first purchase in Lucas county was made, all land in the county was subject to sale at $1.25 per acre payable in gold, or subject to location with U.S. Land Warrants. No limit was made by the government as to the number of acres any one person could purchase. The only limit was the size of one's purse.

"These land warrants, seldom seen now-a-days, were issued by the government to old soldiers, and were transferable under regulations of the U.S. Land Commissioner on location. At the local or district land office, the locator, soldier or assignee paid a fee of one dollar for every forty acres located, as a compensation to the Register and Receiver of the land office. Most of these land warrants were purchased of the ex-soldier by speculators, and the warrants duly assigned in blank had a regular market price or value. In 1851, when I first saw the state of Iowa, to 1858, the price ranged from 85 cents to $1.00 per acre.

"the would-be settler seeking a home for his family, travelling over the western prairies on wagon with wife and family and all his belongings, on finding a location contiguous to timber with good water and fertile soil --- the spot he desired to own --- set himself to work in order to "know where he was at" by hunting corners fixed by the government surveyors. When he had found a corner (he could set about ascertaining) the number of the township and the range, the number of the section, and the part of the section he desired (and remember this was no light task, no near neighbors to give him the information and show him the corners; the stakes, many of them, indicating the corners, had been destroyed by the prairie fires which used to sweep with terrific violence over all these prairies every year)." 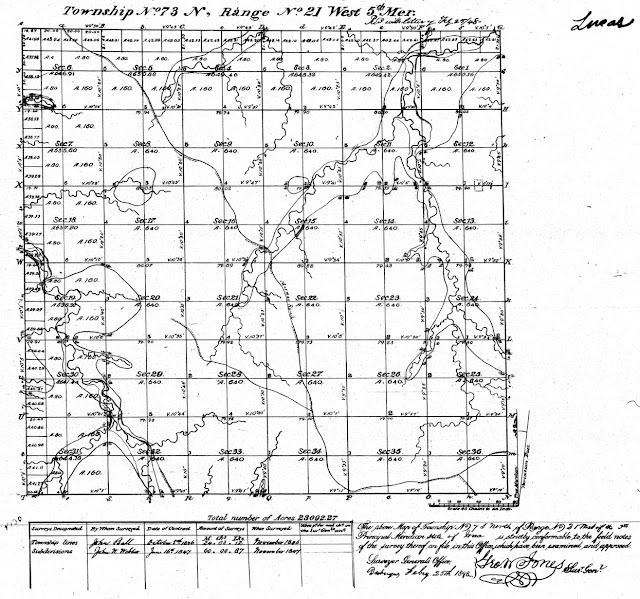 "Having found the description of his claim, the next thing for him to learn was whether it was still vacant land or had already been sold by the government. This necessitated a journey to the local land office; then, when the first purchase was made, at Fairfield (in 1853, the Fairfield district was divided, and an office located at Chariton). Not much of a trip nowadays to Fairfield; you can step on board the train in the morning after breakfast and return again in the evening before supper. At that time, Fairfield was a good deal farther off than now; then the trip had to be made on horseback, with bad roads, consisting merely of trails, perhaps high water and no bridges, occupying several days.

"Usually, in the 50s, the settler would take with him the numbers of several quarters (quarter-sections of land) in case he found the first choice entered.

"It is well to remember that the first club organized in Lucas county was in about the year 1848. Not many members at its formation, with no written or printed constitution and by-laws, yet every member, and every actual settler was a member of this club, was thoroughly posted as to its power and its laws. It was organized for the purpose of securing him in the possession of his homestead. These early settlers, not overstocked with money, would make improvements on their claims to the best of their ability, and rely on their club to prevent their claims from being jumped, and woe betide any stranger that might be seen prowling around hunting section corners anywhere in their vicinity.

"At that time there was a United States law especially for the benefit of those settlers who had not the ready cash to pay down for their land, known as the pre-emption law. Under its provisions the settler was required within thirty days of the time he had commenced improving his land, to file a notice at the land office giving a description, that is the number (i.e., township, range, section, subdivision of section) of land claimed. He then was allowed twelve months to perfect his purchase. If at the expiration of that time he could prove by credible witnesses that he had built him a house on the claim and was living in it, he was allowed to enter (and pay for) the land.

"The pre-emption claim being filed at the land office did not preclude the land from being located by other parties, but if so located the location was subject to the (original) claim. Should two parties at the same time apply for the same piece of land it was put up at auction to the highest bidder of the two.

"In 1854, 1855 and 1856 it was no uncommon thing for this to occur; men would be seen racing into town on horseback, their horses turned loose, no danger of them running away as they would be completely fagged out, and the riders would rush for the office door for the coveted 80 or 160.

"In those years, 1854, 1855 and 1856, there were a great many strangers from the different states hunting good quarters of land for settlement by their sons at some future day, or for speculation. Sometimes they would select some quarter section that someone in the neighborhood had coveted with a wistful eye, but was not ready to purchase. When the stranger had departed for the land office with the numbers secure in his pocket to purchase, the other would take his axe and in the presence of a witness cut four logs --- they were always called logs but frequently were logs in miniature --- and lay them across one another on the land and call it the foundation of a house and then make his way leisurely to the office and file his claim; if he had cut those logs before the stranger had entered the land his claim was good, providing he perfected it inside of twelve months. If the stranger had not left the town a compromise between them generally would be effected. If he had left town, his entry would be in jeopardy for twelve months, and if at the end of the twelve months the pre-emptor determined to prove his claim, he gave notice at the office of the time, and the officers notified the purchaser so that he might, if he chose, contest the claim.

"In all my experience I do not remember a claim under the pre-emption law to be rejected by the land officers; it always proved good as against the speculator, as all outsiders were termed those days.

"Sometimes I must confess that if some of the claimants under the law had been subjected to a rigid cross-examination, the improvements they claimed to have made would have turned out to be extremely flimsy. The questions asked by the land officers were stereotyped questions, easily answered. I quite remember one occasion involving a claimant and it will give you an idea of how this might go. I thought I would have some fun, so I said to him: "Say my friend, how about that house of yours having a good solid floor as your witness testified?"

" 'Why of course it had a floor; that fool of a lawyer never asked me what the floor was made of, it has a good solid floor of earth.'

" 'Why of course it has a door; how could one get in the house if there was not a door. The blamed fool never asked us if there was a shutter to the door, did he?'

" 'But you testified that there was glass in the window.'

" 'Well now friend, I was a little staggered for a moment about the glass, but remembered that Jim here had stuck the neck of a whiskey bottle in a knot hole, and was not that glass?' He had complied with the letter of the law and got his quarter section.

"Sometimes the settler who perhaps had already received the benefit of the law and reached out for another forty joining him, or did not want to bother himself to comply with the provisions of the law, and not having the ready money to purchase the coveted forty acres or quarter section, as the case may be, would "enter his land on time," as it was termed.

"He would give the numbers to a land agent who would enter the land in his (the agent's) name and give a bond for a deed, payable in one year at an advance of forty per cent over costs, pretty high rate of interest we would say today, but it was the regular interest at that time on most money transactions, although not the legal rate. A great deal of land was entered in this way, and land was in such brisk demand that the agent would just as soon as not that the bond should be forfeited and the land fall to him. By the year 1858, the demand for land had fallen off and was a drug on the market."