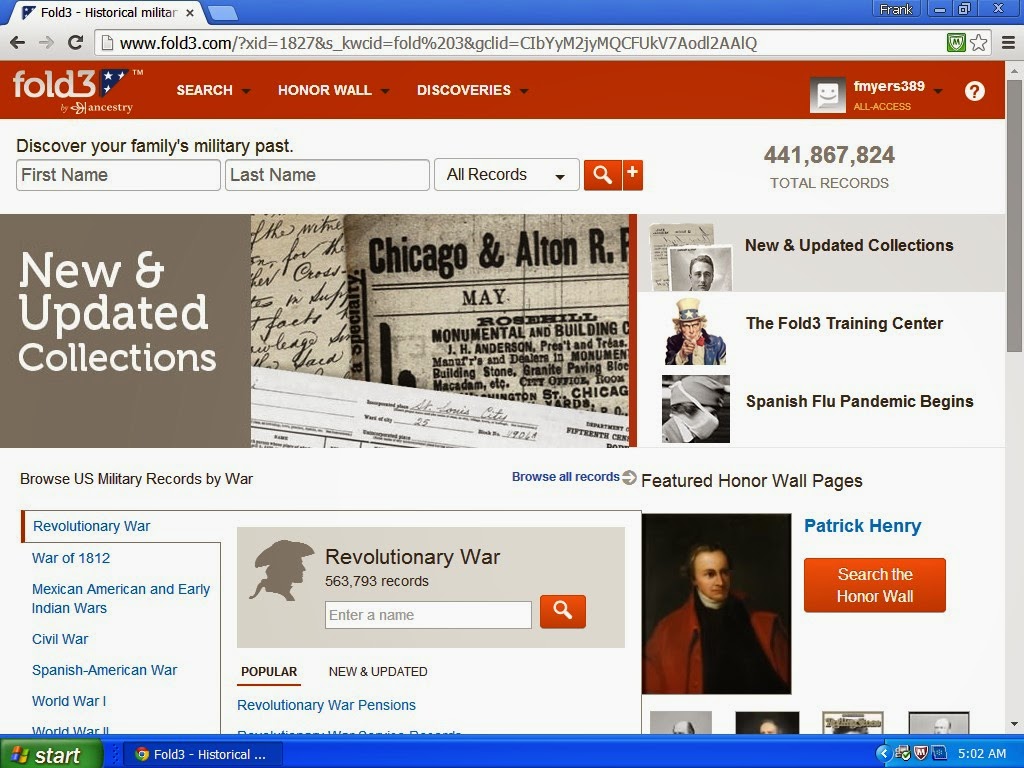 I have this love-hate relationship with Ancestry.com --- the biggest online subscription research tool out there for those of us interested in family history or engaged in other research projects that involve tracking folks to their origins and digging out the details of their lives. I use it nearly every day.

But it is kind of expensive and most likely will become moreso --- and they keep fiddling with its search aspects, allegedly to make it more user friendly and for the most part failing.

Despite the carping, I did give myself an early birthday present this week and finally sign up for Fold3 --- named after I assume the tri-corner shape into which U.S. flags generally are folded for presentation or storage. This site incorporates a huge variety of digitalized military records, many in custody of the National Archives and Records Administration.

I've been working a little this week on a roster of Lucas County's Civil War dead that I started back in 2011 and have been fiddling with (very slowly) since. I've rounded up what I believe to be most of the names, but fleshing out their lives takes a long time. Here's an example of one entry, completed yesterday: 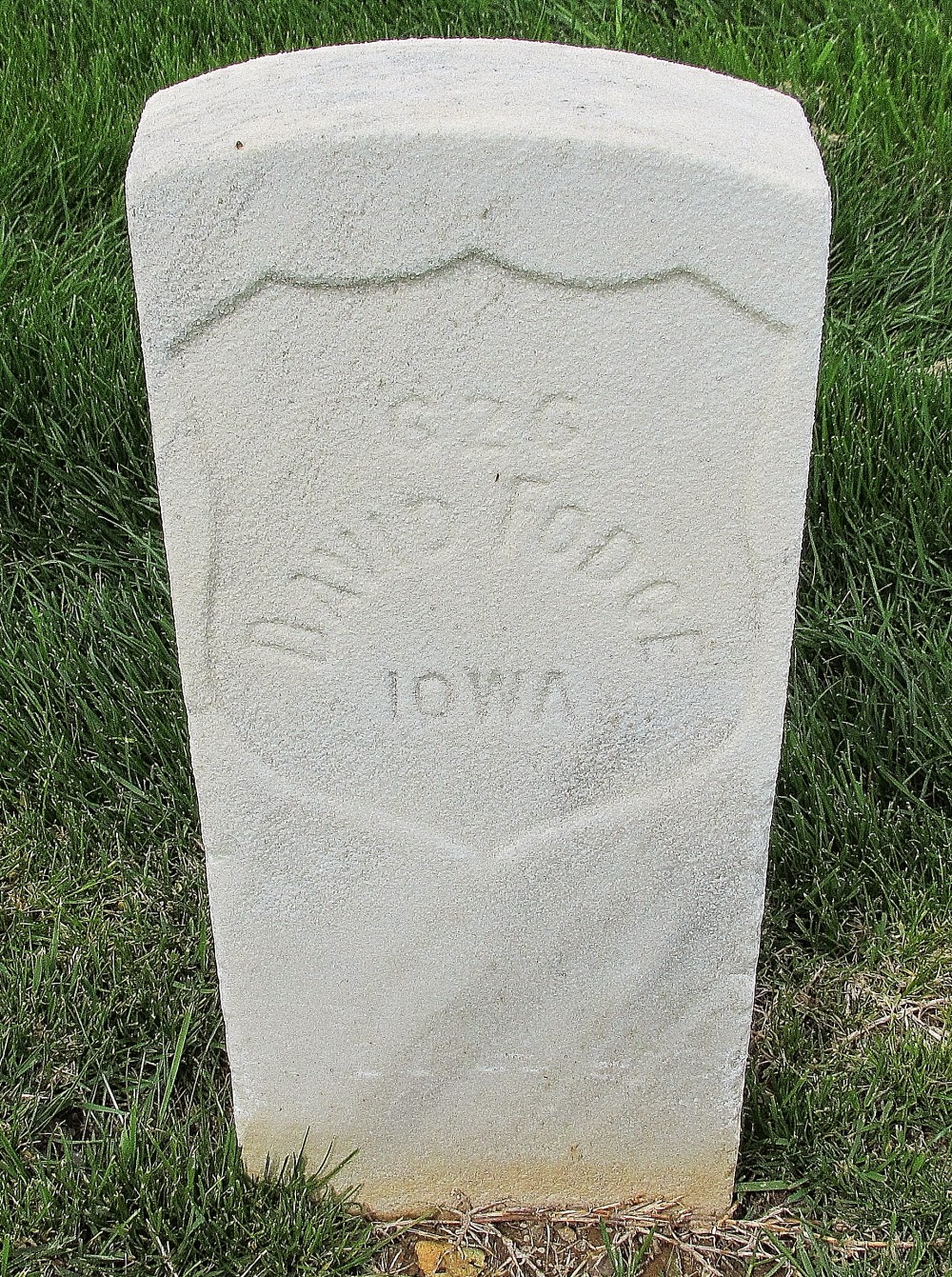 David was an Ohio native, born 24 November 1822 in Lawrence County. By 1844, he had moved to Delaware County, Indiana, where he married Martha Jane Mansfield on 28 November of that year. Martha and David became the parents of five children while living in Delaware County --- James M., Eliza Jane, Rebecca Ann, John Riley and Eolina Ursula. During the fall of 1853, the family moved west, first to Allamakee County, Iowa, and soon thereafter to Giard Township, Clayton County, west of McGregor, where they were living when the 1856 state census was taken. Their youngest child, Charles W., was born there.

During 1857, the family moved to southern Iowa, locating near the Iowa-Missouri boarder in Howard Township, Wayne County, where they were living when the 1860 federal census was taken. Their daughter, Rebecca, died there on 6 June 1859 and was buried in the Medicineville Cemetery. Soon after 1860, they relocated again, this time to Union Township, Lucas County, where their post office was Argo.

David was 39 and described as 5 feet, 8 inches tall with fair skin, blue eyes and dark hair when he enlisted as a Private in Co. G, 34th Iowa Volunteer Infantry, at Chariton on 10 August 1862. Somewhat confusingly, a Union Township neighbor with a similar name, David M. Fudge, had enlisted in the same unit a few days earlier. David Fudge would survive the war; David Fodge would not.

The unit mustered at Camp Lauman in Burlington on 15 October 1862 and David served honorably during engagements at Chickasaw Bayou, Mississippi, in December of 1862, and at Arkansas Post, Arkansas, during January of 1863. He reportedly became ill near St. Louis while escorting Confederate prisoners upriver after their surrender at Arkansas Post and was taken to the Convalescent Hospital at Benton Barracks, where he died.

Following David's death, Martha and her children returned to Wayne County, locating in Warren Township near the current town of Allerton, then soon after 1870 moved west into Nebraska to exercise veteran homestead rights extended to Martha and to her eldest son, James, a veteran of Co. H, 1st Iowa Volunteer Cavalry. She died in Custer County on 21 August 1899 and is buried at Broken Bow.

I finally decided that if I was going to do this right, I needed access to the original documents from Civil War widow pension files, maintained by the National Archives. And Fold3 offers that, via digitalization of records previously available only on microfilm.

And so far I'm delighted with the results. The files generally contain a good deal of information about the service records of deceased military personnel as well as docoments related to the paths their survivors took in the years that followed.

I've noticed some carping online about "paying" for U.S. government records --- but as a long-time researcher I can guarantee you that we've always had to pay. The process used to involve placing an order directly with the National Archives for photocopies of file documents --- very time consuming and without guaranteed results. This is much quicker, far less expensive (if you're interested in multiple files) and there's no guesswork about what may or may not arrive in your mailbox weeks after an order is placed.

Revolutionary War pension file documents also are accessible via Fold3 --- and I expect to use those, too, as time passes.

My wonderful new subscription coincided with a visit yesterday from Earl Comstock, who is heading up an effort to develop the former county jail site into a veteran memorial. Organizers hope the site also will be the home as time passes for one of Ray Sorensen II's Freedom Rocks.

The property has been leased from the county and Earl and others have arranged to move the big flagpole from the former National Guard Armory in north Chariton to the site.

But there's an event scheduled at the site on April 9 that should be marked on the calendars of those interested. April 9 marks the end of the Civil War --- the 150th anniversary of Lee's surrender at Appomattox, Palm Sunday that year.

On the 9th, development of the memorial will begin with a tree-planting effort coordinated by Chariton Boy Scouts. There will be a little ceremony and I've volunteered to provide a list of the names of the approximately 125 men from Lucas County who died in that dreadful conflict. These may be read at the end of the program, before Adam Bahr plays "Taps."

And, by the way, if you happen to have a huge boulder languishing somewhere in the back 40 that you'd be willing to part with to provide the Freedom Rock canvas --- Earl would like to hear from you.