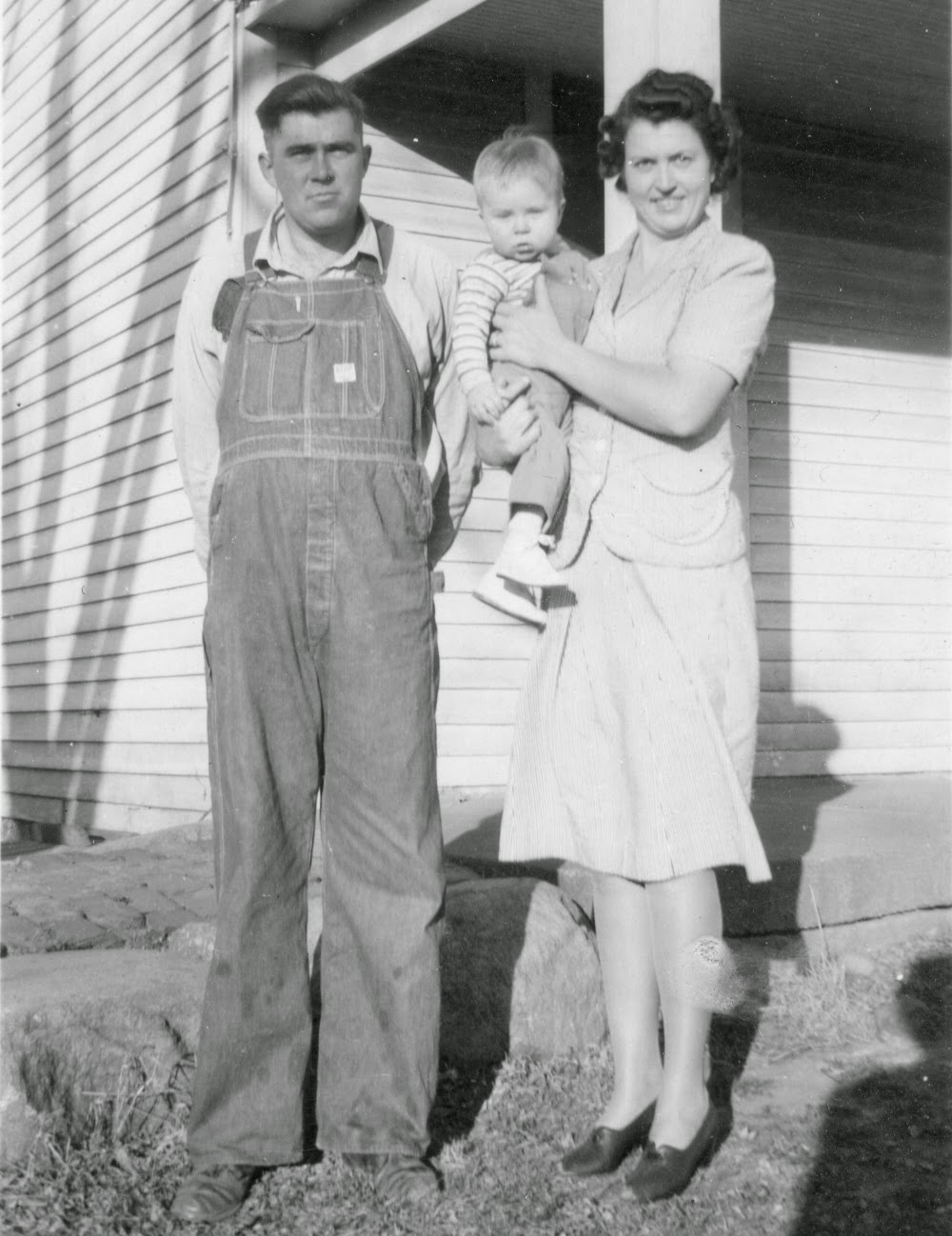 Thanks to all for the birthday best-wishes. It's great to be remembered --- and to grow older (especially when you consider the alternative). I've put the baby photo here this morning for Sue Terrell and others who gave me a hard time a couple of weeks ago. Yes, I once was a baby, too. Really.

Celebrated a little on the eve of the big day (to be brutally Frank, I'd forgotten the "big day" was upcoming until called forward to be blessed in church last Sunday). For better or worse, others keep track of these things more effectively than I do.

As expected, spent much of Friday playing obsessively with the new research toy --- and chasing Civil War-related minutiae. The big outing involved a trip to the Chamber office to sign a week's worth of checks. Then I ran into Harold and Dianne Mitchell at HyVee --- appropriate since Dianne and I go back together almost to the beginning of this operation. Yes! There will be another Dry Flat reunion, maybe come August.

Speaking of reunions --- and no thanks to me and classmate Dick Christensen (still cowering in Florida I understand) --- the RHS Class of 1964 will reunite this summer, too. Dick and I got together last summer, sat under a tree and talked about how nice it would be to have a reunion, then did absolutely nothing about it. It took Nancy (Allen) Moss, Gwen Cottingham and Steve Pierce to pull it together.

Part of the preparations for that event will be brief accounts of lives to date (excluding the first 18 years, of course, since we remember those together). I decided to be proactive for once and do mine first. It's an entertaining exercise, so go ahead an try it --- no matter where you are along the trail. A couple of rules: Allow youself no more than 10 minutes and don't think about what you should include. Just write!


…earned that B.A. degree in journalism at the University of Iowa during 1968, carrying a white “peace now” cross into the field house along with many others, then enrolled in graduate school to await the draft. Uncle Sam nailed me the following spring and after training at Fort Polk, Louisiana, then in Baltimore and Washington, D.C., dispatched me to Saigon. I worked a year as an order of battle analyst/editor at the Combined Document Exploitation Center --- a joint Vietnamese, American and Korean intelligence center where documents captured in the field were processed, evaluated and disseminated; living “on the economy” since we had no barracks (a hotel instead), mess hall or things like that. Saigon had great restaurants!

After returning stateside, finished a useless M.A. degree in journalism for lack of anything better to do, then went to work in a field I enjoyed, community (think weekly newspaper) journalism, editing weeklies in Winnebago County, Iowa. As the bottom fell out of weekly journalism, switched to daily and settled at the newspaper in Mason City, where I worked far too long but among wonderful people in various editorial capacities until retirement --- design editor, weekend editor, religion editor, front-page editor. Name it, I did it.

Returned to Chariton and became active in the community where I currently serve as president of the Lucas County Historical Society, on the Historic Preservation Commission and as a Chariton Area Chamber/Main Street board member as well as trying to be an active member of St. Andrew’s Episcopal Church and the Lucas County Genealogical Society.

Had the great good fortune to share my life at times with a few good men, nearly all of whom I’ve disconcertingly outlived, but continue to advocate in a well-mannered sort of way for LGBTQ equality on all fronts. Lived through the AIDS pandemic, but expect old age will get me. A yeller dog Democrat, although of course some of my best friends are Republicans.

I write and shoot photos daily for a blog called “Lucas Countyan,” for practical purposes a full-time job that I find highly entertaining, striving to be informative, amusing and, when the opportunity presents itself, annoying --- and continue to anticipate and appreciate each new day.

I love that picture of you and your parents. We grew up in a glorious era.

That is indeed a great picture...hope to see you in August.

....and a wonderful song

A great picture of you with your parents!! Looks like it was taken at Granddad's house. Hope you had a great birthday cousin!!

Best wishes for a happy birthday. That is a fine photo. You resemble your father, two handsome fellows.