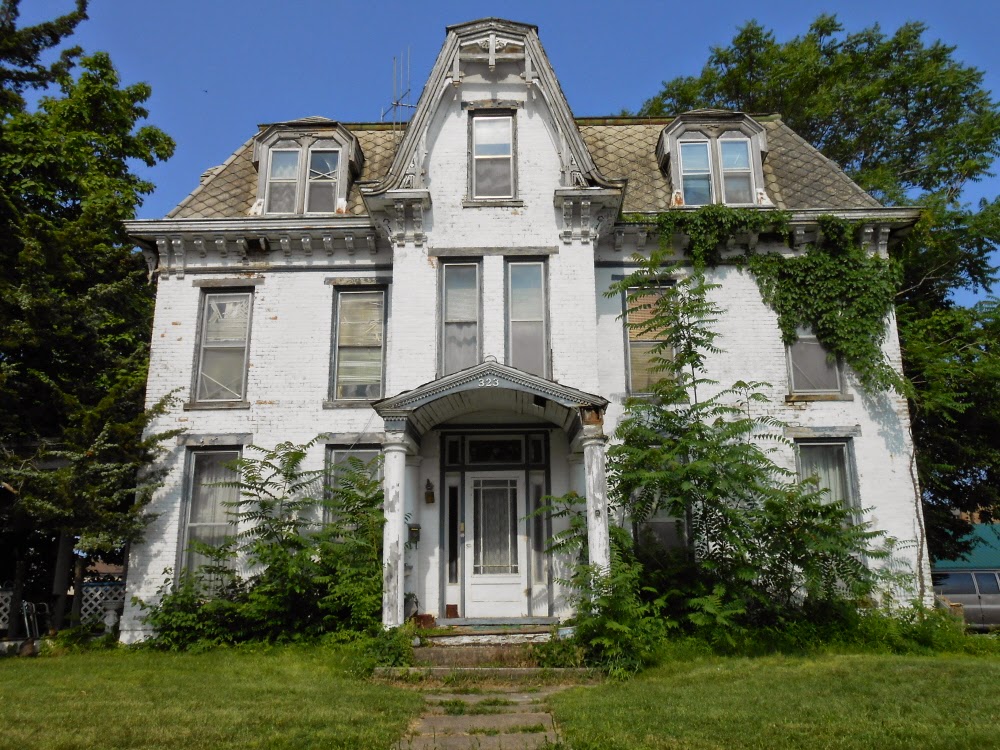 The Stewart-Harper-Connell house came down early this week, nudged so skillfully by the big equipment involved in its demolition that its brick walls and timber interior collapsed neatly into the basement, a pile of masonry and splintered wood. We've known this was coming for at least two years --- the grand old lady, although structurally sound, was in deplorable shape after some 30 years of decline. But still ....

I thought about going over and taking some photos of the rubble, then decided that would be a little like snapping a few shots of Granny in her casket. I'd rather remember her alive. And she was still very much alive, although trashed, when the photo here was taken during July of 2013.

Truth Assembly of God, located to the north, had just acquired the building and the previous occupants had departed leaving the interior knee-deep, literally, in trash. Seriously, it looked like a low-end second-hand shop after an earthquake from bottom to top. I've led a sheltered life, I suppose --- and had never seen anything quite like it.

The last mantlepiece in the house had been ripped out and taken away, spindles on the walnut stair broken and a hole knocked in a stained glass transom. In a former small foyer at the northwest corner of the house, now a closet, a big hole had rotted through the floor, offering immediate basement access to the unwary.

I took many photos, exterior and interior, during July and September of 2013 --- but posted only a few. You can find a post here about the walnut staircase that curved up in six flights, three long and three short, from entrance hall to the third floor.

I'd written now and then about the history of the house, still something of a puzzle, before. Those posts are located here and here and here.

Embedded somewhere behind this grand Second Empire facade is a smaller and older house that dates from the 1860s. I really have no idea where it's at --- but the building itself offer clues. Although the facade appears symmetrical, that's an illusion. The two rooms to the north of the entrance hall actually are about four feet wider than the two rooms to the south. That would not have happened had the 12-room main block been built all at once.

I suspect that this part of the house was given its shape between 1875 and 1880 by George J, and Amanda Stewart, who purchased the property during July of 1875. By 1880, they were living here in a dwelling large enough to house themselves, their two children (Zora and Harry), 14 boarders and four servants.

Even then, the Stewarts were an affluent mercantile family --- and George went on to become Lucas County's leading dealer in grain, fuel and lumber, some of the time in partnership with Daniel and William A. Eikenberry.

A "commodious" addition was made to the house in the early 1890s --- and that, I think, was the kitchen addition to the rear (although at one point I thought that wing might have been the earliest part of the house, its woodwork suggests otherwise). This wing consists of two rooms down and two up --- beneath a mansard roof similar to that of the main block --- with an enclosed back staircase leading from basement to second floor in the middle.

Both George and Amanda Stewart died during 1927 and the house was inherited by their children. Harry deeded his interest to Zora, then married to Philander L. Harper, in 1928. The Harpers had lived for many years in Nebraska with two daughters, Eloise and Helen, but Zora had returned home to Chariton to care for her parents in their old age and Philander joined her. So the Stewart house became the Harper house.

Zora died here in 1955 after deeding the property during 1949 to her daughters. After Zora's death, the house was sold for the first time to the neighboring Assembly of God congregation. But the congregation sold the house in 1967.

Stan and Lorna Connell, who had purchased the Chariton Super Value store next door in 1967, acquired the Stewart-Harper house, too, and brought it back to life, restoring, redecorating and utilizing every square foot of the grand old building.

They moved from Chariton to Mapleton during 1978, however, and Stan died soon thereafter. After the Connells sold the house, the decline that led to this week's demolition commenced.

I'm going to keep fiddling with the history of the house and will post more of the 2013 photos as time goes along, so if you're interested, stay tuned. But be warned, those photos are not pretty.

Mrs Harper, who was quite wealthy increased her wealth by loaning money out to people wanting to buy houses. I know this fact as she loaned my parents the money to purchase the house that I was raised in.

This was my favorite house in Chariton. It is very sad to know that it is no longer standing. At least seeing it in disrepair meant that there was a chance that someone would buy it and restore it to its former glory.

You should interview the former owners be for you put shot like this in here, I know for a fact you didn't . The crunch should be ashamed of what they did to get that house.

I agree, he should have interviewed them and I like how he makes it sound like there was a lot of stainless, when it was only a 2ft by 3ft over the door, and he goes on about the stairs and sependable and the fireplace. It's ok for the church to pull all that out for money but no one else. He must be a member of the church and that makes it ok. And for all the trash and junk, the church had no problems selling it all did they. Very disappointed in this article.

YES WHY DIDN'T YOU INTERVIEW THE PREVIOUS OWNERS?ONE OF THE PREVIOUS OWNERS DID NOT LIVE THERE FOR OVER FOUR YEARS AND WHEN YOU SAY PREVIOUS OWNERS YOU SHOULD SAY OWNER.THE MINISTER HAD ALREADY HAD SOMEONE OUT TO LOOKI THE HOUSE OVER TO SELL THE FIRE PLACE AND THE STAIR WAY.HE ALREADY KNEW HE WAS GOING TO MAKE A PROFET'IF YOU PRINT A STORY SHOULD'N YOU HAVE THE FACTS?YES THE HOUSE WAS IN BAD SHAPE AND HAD BEEN FOR A LONG TIME.YOU WANT TO POST PICTURES ABOUT THE CONDITION OF THE HOUSE ,GET YOUR FACTS RIGHT.YES THEY'RE GOING TO BE A MESS,BUT DO YOU KNOW WHY?CALL MARY AND LET HER TELL YOU WHY