For heaven's sake, Henry, why? 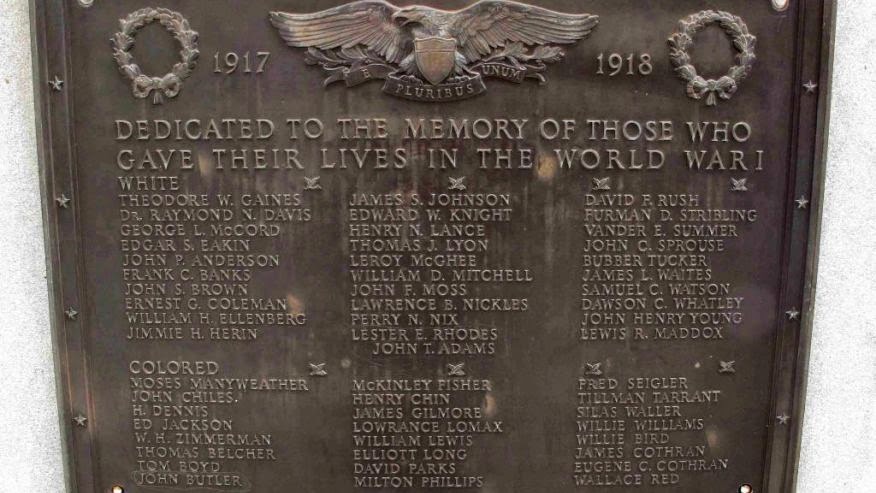 War memorial plaques in the small South Carolina city of Greenwood (population 23,000) have been in the news recently --- and I've been reading some of the coverage. It's a preservation issue on the one hand, illustrative of continuing debate about U.S. racial history and what to do about it on the other.

What makes the Greenwood plaques controversial is the fact that, in bronze, they divide the Greenwood County men who died during World War I and World War II by race, "White" listed above, "Black" listed below. The dead of Korea and Vietnam are commemorated on the monument, too, but without racial distinction.

The Greenwood American Legion, which owns the monument, and the mayor --- the city owns the ground under it --- decided to replace the segregated panels with integrated ones, raised quickly the $15,000 needed to cast new ones and planned to install them in time for dedication on Martin Luther King Jr. Day.

Then preservationists and others threatened to have the mayor arrested, invoking a South Carolina law that forbids alteration of any monument erected by a government entity without two-thirds legislative approval. That law dates from 2000, when after long and contentious debate the Confederate battle flag, traditionally flown on the dome of the state capitol, was moved to a location near a Confederate memorial on the capitol grounds. There's a bill in the legislature now that, if approved, would allow the change in Greenwood; but for the moment, stalemate.

So play preservationist for a minute here and ask yourself what you would do in this situation. I finally decided I'd probably leave the monument alone --- unaltered, it makes a powerful statement; but erect the new plaques right there, too, in an attempt to right an old wrong, and with explanatory context. It's important to remember that the U.S. military was segregated until 1948 --- something we're all complicit in --- and so was Greenwood.

But of course I'm white and while entitled to an opinion arguably have little stake in the outcome. What I found curious in the media coverage of this situation was that no one seems to have asked black people of Greenwood how they felt.

I read a lot of old Chariton newspapers and write now and then about Lucas County's black community, now vanished --- most recently Theopolis "Buster" Gibson.

It's always disconcerting to become aware of the pervasive and casual taken-for-grantedness of the racism reflected in the writings of some (by no means all) of our newspaper editors and publishers past --- from the beginning until roughly World War II.

I typed the obituary of Buster Gibson's grandfather, William Martin, into a Find A Grave form yesterday while creating a memorial there for him, and also for Buster's grandmother, Tina (Root) Martin.

For heaven's sake, Henry, why?

Casual racism has largely disappeared from the mainstream media by now, including the Chariton newspapers. And reporters, editors and publishers as a rule are considerably more careful about the current phobias in various stages of decline and rise --- homophobia, Islam-ophobia, gender-ophobia, immigrant-ophobia, etc.

On the other hand, I stopped renewing my subscription to the Chariton newspapers a couple of years ago, primarily because of the casual homophobia dropped into his weekly editorial page columns now and then by the current (absentee) publisher.

For heaven's sake, why?

Although I miss the news, and probably will subscribe again one of these days, it's a lifestyle choice I've not regretted.