I have this file labeled "blog stuff" full of short items that intrigued me as I browsed old newspapers looking for something else. Since it's Sunday morning and I have a soft spot for pipe organs, I'm going to expand a little on an article in The Herald Patriot of March 12, 1925, headed "Presented a Pipe Organ: It is Being Erected as a Mallory Memorial."

Unfortunately for Chariton, the new organ was being erected in Orlando, Florida --- and it's useful to know the back story in order to understand why.

Smith H. and Annie Mallory and their daughter, Jessie, probably were Chariton's "first family" from about 1867, when they arrived, until 1907, when financial disaster struck. Smith H., railroad contractor, banker and entrepreneur, certainly was the region's richest man. The family home, Ilion, was legendary. They seem to have been gracious and generous people, not only admired but actually liked by most Lucas Countyans.

Smith Mallory died in 1903 and disaster struck in 1907 when a trusted family associate, Frank Crocker, misappropriated funds and bankrupted the Mallory bank, First National, a huge financial disaster for Chariton and many who lived elsewhere in the county. Although the Mallory women, Annie and Jessie, had done nothing wrong, they were held financially liable because they were principal shareholders of the bank and its top (if only in title) officers.

Between 1907 and 1909, Jessie (Mallory) Thayer battled First National's federal receivers to avoid financial liability and keep the family fortune as intact as possible. She lost in 1909 and all Mallory assets in Lucas County were turned over to the receiver --- along with additional cash.

Jessie did, however, shield her personal assets and she was a wealthy women in her own right --- many family assets had been given to her before and after her father's death and she was a good businessperson. But her efforts to avoid financial responsibility for the bank collapse had caused a good deal of bitterness and after the 1909 settlement, Jessie and Annie settled permanently in Orlando, Florida, in a Queen Anne-style home that remains a landmark in that city. Contents of the Ilion were packed up professionally, loaded aboard a rail car and shipped there.

In Chariton, the Mallorys had been prime movers in St. Andrew's Episcopal Church; in Orlando, they became active communicants of the Cathedral Church of St. Luke. Jessie married businessman, socialite and local historian William R. O'Neal as her second husband during 1914, but less than 10 years later, during 1923, both Mallory women died --- Annie at age 81 and Jessie at age 60. Her husband was a principal heir along with members of the extended Mallory family, most notably Albert D. "Bert" Mallory, an uncle not much older than she who had always been a best friend and adviser.

Commencing in 1922, Orlando St. Luke's began to replace its older building with a far grander stone structure more suited to serve as a cathedral. William R. O'Neal and Bert Mallory decided that a new organ for the cathedral would be a suitable joint memorial for Jessie and her mother, as reported in The Herald Patriot cited here initially:

"A recent issue of the Orlando, Florida, Reporter-Star gives an account of the presentation of a fine pipe organ to St. Luke's Episcopal church of that city by Messrs. W.R. O'Neal and A.D. Mallory, as a memorial to Mrs. Smith H. Mallory and Mrs. Jessie Thayer-O'Neal, who were devoted members of that church. The latter while she lived at Orlando spent much time and expense in providing the best music possible for the church, but the account says the means were much more limited than now. So it was a fitting tribute to the memory of these two devoted women. The account reviews the effort of the late Smith H. Mallory and the aforementioned ladies in the work of St. Andrews at Chariton, Iowa, reciting the installation of the pipe organ here and Mr. Mallory's successful efforts in getting the splendid stone church erected. It is said the new organ in St. Lukes will be one of the largest in the south. And all this calls to memory the range of past years and the pathetic changes that have taken place since those who are now commemorated were esteemed members of our Chariton society." 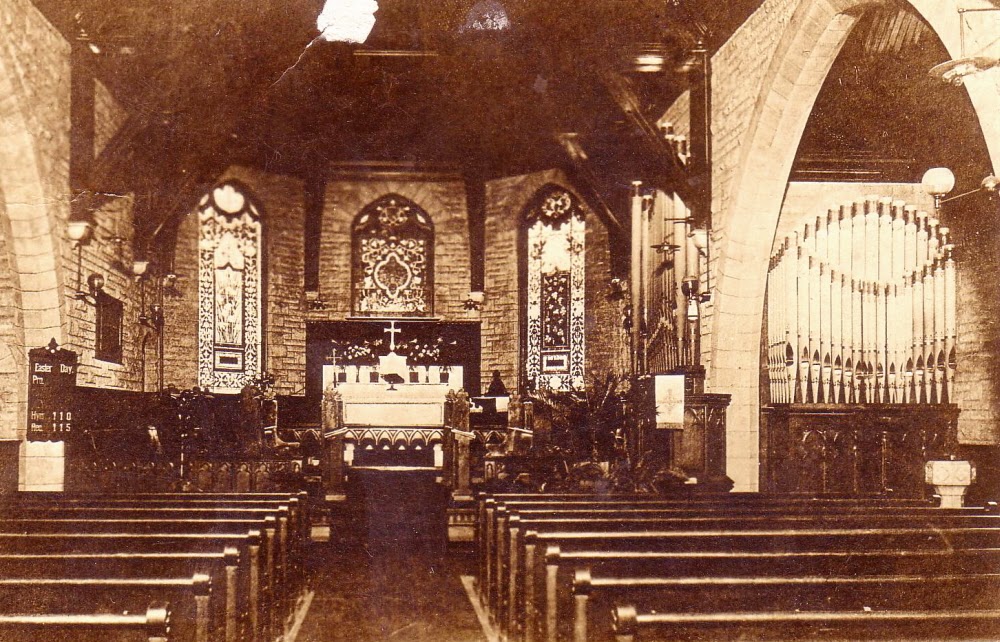 This postcard view shows the organ installed at St. Andrew's in Chariton after its completion in 1903. Unfortunately, that fine building was not built well, was judged structurally unsound during 1955 and demolished --- the organ with it.

The organ installed at St. Luke's was built as Opus 1270 by Henry Pilcher's Sons, of Lousville, Kentucky. Although no precise description is available, it cost $14,900, a substantial chunk of change.

That organ served the cathedral until 1971, when a major remodeling project began. As part of that project, a new 88-rank instrument built by the Tellers Organ Co. was installed in a newly constructed loft over the cathedral narthex. That instrument, updated in 1999, continues to serve the cathedral and, according to conventional wisdom, incorporates pipework from the 1926 Pilcher. I'm guessing, however, that the Mallory link was lost track of in the transition.

this is so interesting! I grew up in Chariton, and knew nothing of this. I moved to Bradenton, FL. on the west coast of FL in 1977. I never knew there was a relationship from Chariton to Orlando. We may have to go visit this church sometime when we are in Orlando. It's a "small world", isn't it?