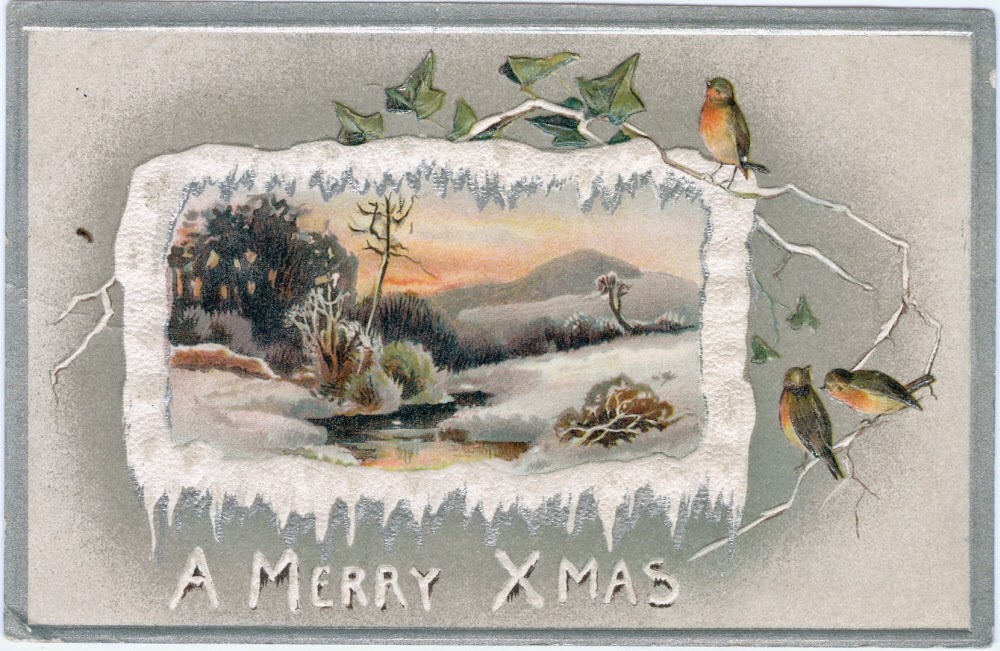 I am in such a quandary over when to go to the woods, light a bonfire and dance around it in celebration of the Solstice, which begins at 5:03 p.m. CST today. Should I have done it last night, on Solstice Eve; or tonight, Solstice evening? And which night truly is the longest?

So many things to think about during a season that's complicated enough as it is.

I looked through the family collection of greeting cards, some of which date to the last quarter of the 19th century, and selected this one as appropriate for the day. It looks better in person, trimmed in silver that does not scan well.

Note the Solstice symbolism --- a frosty winter scene surrounded by a garland of spring robins. And the greeting, oh my, "A Merry Xmas." My great-aunt, Olive McCorkle, sent this to her sister, my grandmother Jessie, during 1910 from Superior, Nebraska, postmarked 2 p.m. Dec. 21. These women were hardly neopagan, one a Methodist, the other a recovering Methodist who had seen the light and joined the Disciples of Christ.

Among a card collection numbering in the hundreds, I found only one with religious symbolism --- a brightly polychromed Holy Family. Most were loaded with holly and ivy, fanciful scenes of English villages, and symbols of spring.

I'm old enough to remember the great "Xmas" debate --- an early "war on Christmas" skirmish during which semi-literate cranks declared the abbreviation unchristian, overlooking the fact that "X" comes from the Greek letter "Chi," long an abbreviation for Christ. That's related to failure to recognize nowadays that "holiday" merely combines the words "holy" and "day."

Personally, I like all the pagan elements incorporated into our current Christmas celebrations because sometime between the 2nd and 4th centuries A.D. church fathers decided to append aspects of a Johnny-come-lately religion to far older Solstice traditions. So bring on those bright lights and blazing candles, decorated evergreens and front-door wreaths; feasting, wassailing and expressions of good will.

I looked for a suitable Solstice carol to embed here, but failed --- skeptics need to be consistent and I just don't find much in the speculative mumbo-jumbo of neopaganism to recommend it.

So here's the Wexford Carol, which can be tracked back to 12th century Ireland and so is among the earliest Christmas expressions in song. The performers are bluegrass great Alison Krauss accompanied by Yo-Yo Ma.