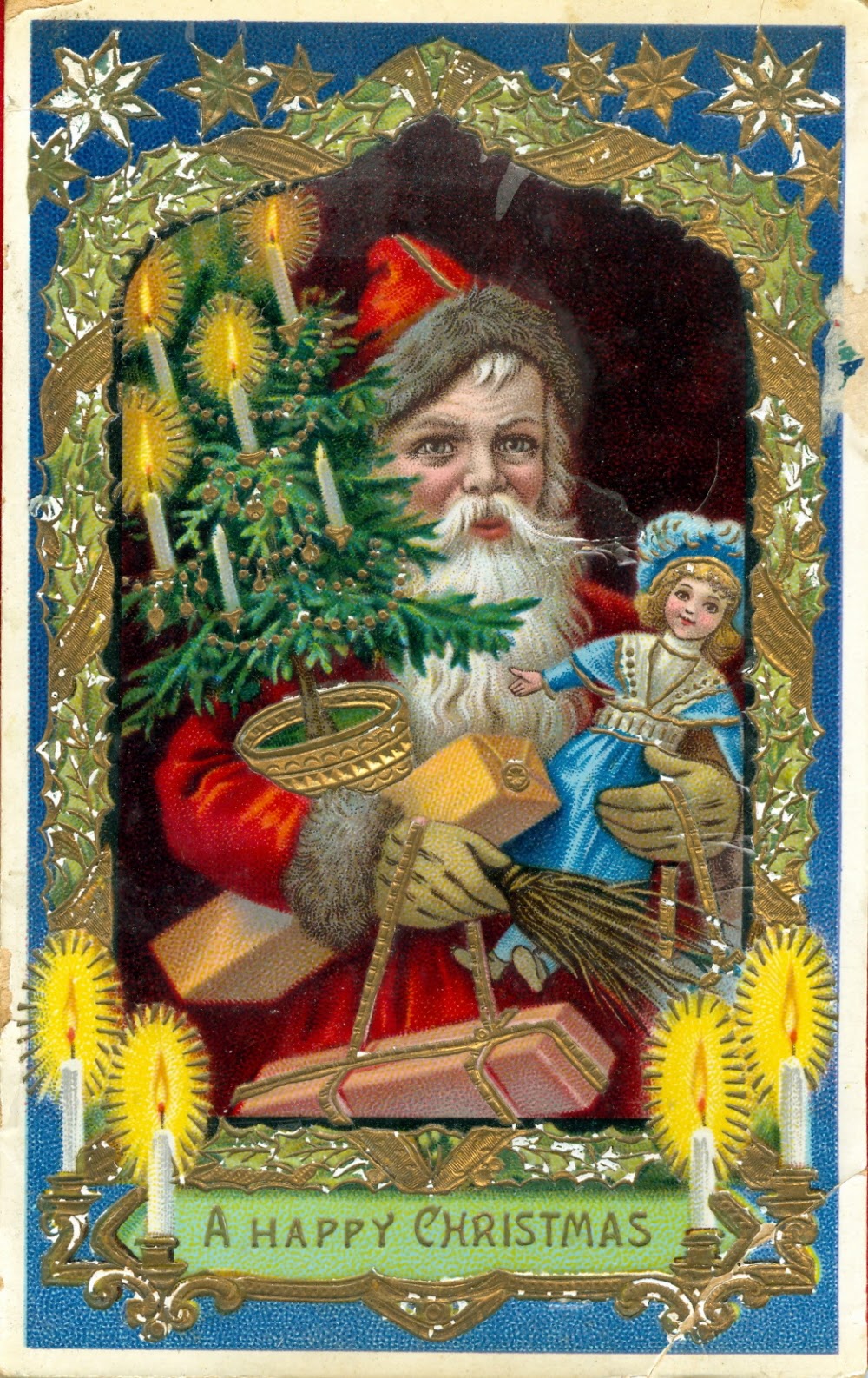 This polychrome Christmas card dating from ca. 1900 is one of my favorites. But I broke the glass in its frame last year and need to do something about that before hauling it out again.

Just for the heck of it, I set out this week to find the earliest reference I could to a Christmas tree in early Chariton newspapers. Since surviving consecutive issues don't commence until 1867, some 21 years after settlement began, nothing in particular can be concluded from the exercise, but it was interesting.

The earliest I found was in The Democrat of Dec. 21, 1869, which announced that there would be a "Christmas Tree at the Presbyterian Church on Christmas Eve.

"A general invitation is given to all who may wish to hang presents on the tree for their friends or the children," the report continues. "They will please leave them with the committee at the Church before noon on the 24th inst. All the children, their parents, and friends of children are invited to the Church in the evening."

The Presbyterian church was located then, as now, at the intersection of Braden Avenue and North 8th Street, just a block east of the square.

Advertising in that issue of The Democrat suggests that store shelves were well stocked with gifts, however --- especially Christmas candy. C.H. Younkin & Co., located three doors south of the southwest corner of the square, had the largest advertisement and, if it were to be believed, "the largest and finest variety of holiday goods ever brought to Chariton." Included were "Bohemian glassware, vases, china ware, chrome pictures, books, toys and fancy goods of every description."

The arrival of the Burlington & Missouri River Railroad two years earlier had expanded considerably the selection of goods available to shoppers in Chariton during the holidays and at other times. Goods no longer had to be hauled into town by ox-drawn wagon.

J.B. Pickel & Co., dealers in groceries, Queensware, glassware and notions and located one door north of Wilcox's grain elevators, offered the choicest of cranberries for Christmas dinner as well as wild turkeys, prairie chickens, quail and "all kinds of game" purchased from enterprising Lucas County hunters.

The Burlington & Missouri River was advertising an innovation in speedy travel that would commence on Jan. 1, 1870. For the first time ever, fast trains --- one in each direction --- would speed through Chariton to connect Council Bluffs and Chicago in 22 hours, providing all went well. This dizzying speed would be accomplished by stopping only in county seat towns along the route. The west-bound train would arrive in Chariton daily at midnight; the east-bound train, at 2 a.m.

Four years later, during December of 1873, the Methodist Sunday School celebrated on Christmas Eve with a Christmas tree. "The exercises were brief, the intention only being to make a suitable occasion of interest to the children. And when the distribution of presents began, how the bright eyes of the little folks sparkled as present after present passed into the hands anxiously waiting. Every member of the school received a present."

Services were held at 10:30 a.m. Christmas day at St. Andrews Episcopal Church and all were invited to attend..

But, if newspaper reports are to be believed, Swedish Lutherans --- who did not yet have a church building --- held the longest service on Christmas morning, commencing at 4 a.m. in the courtroom of the Courthouse and continuing for three hours.

Christmas night, a masquerade ball was held at the recently completed Mallory Opera House on the northwest corner of the square and The Patriot of Dec. 31 reported that it "was quite a fine affair, some thirty or forty couples appearing in costume. Many of the ladies were attired in very handsome and appropriate costumes, and the gentlemen had outfits in every style that imagination could suggest, from the most hideoulsy grotesque to the simple domino. The Leader man (editor of the Patriot's rival, The Chariton Leader) says he was disguised as a gentleman. All went merry as a marriage bell, and music chased the hours with flying feet, or words to that effect, until about 3 a.m."

Elsewhere in Chariton, however, there was trouble on Christmas night. Under the headline, "Dastardly," the Patriot reported that "S.L. Milner was waylaid by someone and struck a blow in the face, cutting and bruising it considerable. Mr. M. had been serving as deputy marshal, and entered upon his duties that day. His first prisoner bit him severly on the hand, and before making his second arrest he was treated as mentioned above. If he had only kept on he might have been as unfortunate as the Burlington policeman who within one week shot himself in the hand, struck at a dog and fractured his right kneepan, fell and sprained his ankle and was run over by a butcher's cart. Milner had Zora Harris arrested for the assault, but in the trial before Squire Brown he proved an alibi and was discharged."

Traffic control had become an issue on the square during the holiday season, and the Patriot editor felt obliged to advise that, "People coming into town should be particular to tie their teams securely. It is an exceeding dangerous practice to leave horses standing around the square insecurely fastened, besides there is a low forbidding such carelessness. The marshal has power to take such teams in charge and hold them until the penalty is collected. So be careful."

By December of 1874, the new town of Derby was beginning to flourish, and its correspondent reported in the Patriot that, "The Methodist Sunday School had a Christmas tree in the church on Christmas eve, which was a decided success. The tree, that was laden to its utmost capacity, was eagerly watched by the little folks and I am happy to say that few if any of the little hearts that beat with bright expectations were disappointed, and to complete the liberal contribution to the young folks' pleasure, Santa Claus in his old and well worn robe, and well-filled basket, passed around and gave all a supply of candy."

Down at Melrose, "the M.E. Church gave a neck-tie festival on Christmas Eve. The attendance was large, notwithstanding a Christmas tree at Lagrange took away a number of our citizens. The net proceeds were $75, which go to liquidate a claim against the parsonage."

But there had been trouble at the Philip Hicks home in Washington township. "The young folks were having a sociable dance on Christmas night," The Patriot of Dec. 30, 1874, reported, "when five or six young bloods, who had been too sociable with Mr. Demi John that day, went there and thought they would have it all their own way. Quite a good deal of knocking down was indulged in for a short time; one of the bloods struck four or five men, brandished a revolver, kicked two windows out of the house and broke things up generally. No arrests made yet."