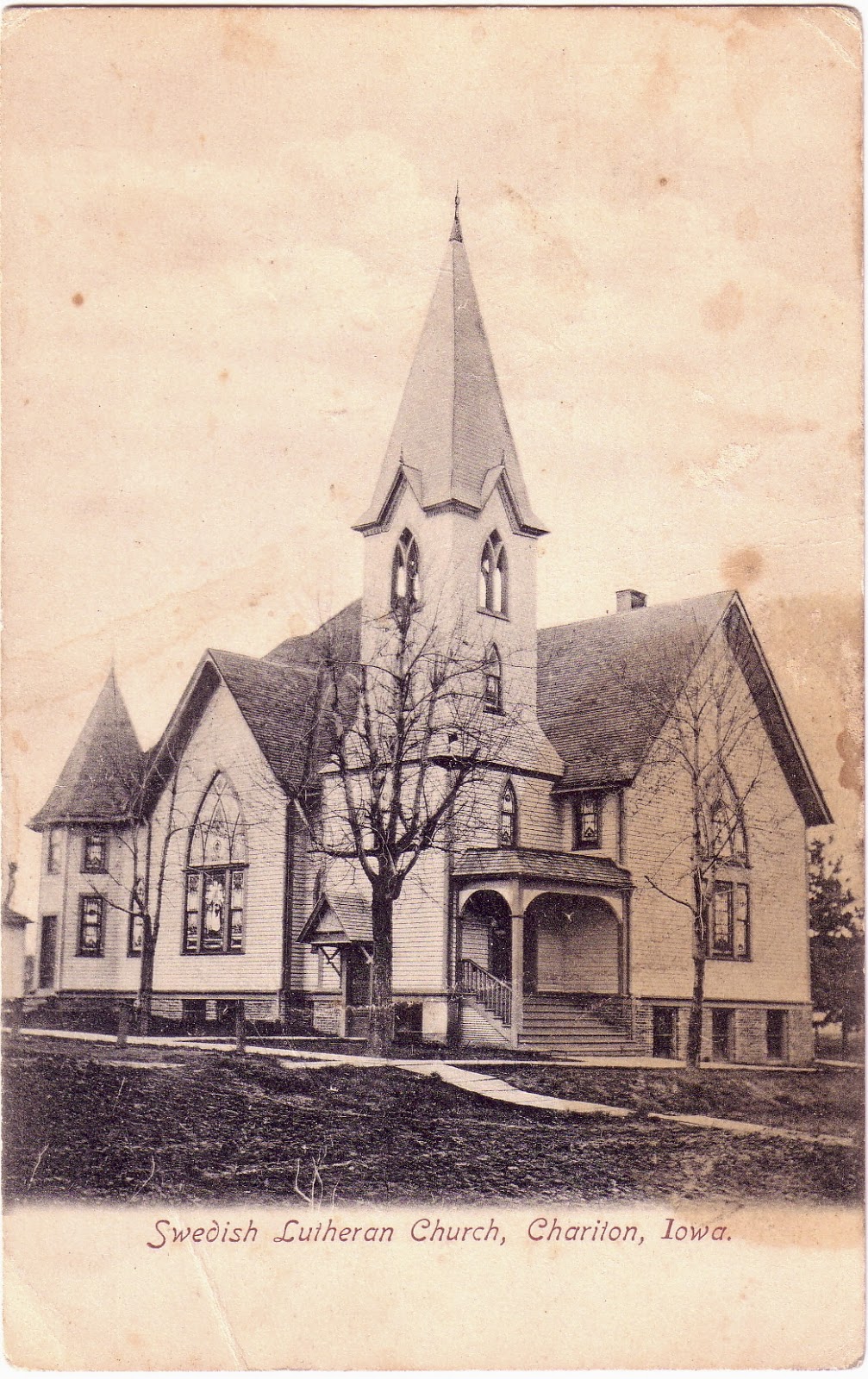 Chariton's Swedish Lutherans celebrated Julotta early on Christmas morn, 1914, in this fine 1903 building at the intersection of North 8th Street and Roland Avenue.

We'll have to wait and see if snow will be in the air on Christmas Eve, 2014 (a 30 percent chance, according to the forecast), but the days preceding it have been gray, mild and damp --- not white.

That was not the case a hundred years ago, as Christmas Eve 1914 approached. The holiday fell on Friday that year; Christmas Eve, on Thursday. A major snowstorm hit Lucas County the preceding Sunday, causing consternation among those planning Christmas programs. Then, the days and nights turned bitterly cold.

The Herald-Patriot's Williamson correspondent reported in that newspaper's Christmas Eve edition (delivered where possible a day early, on Wednesday), that "A white Christmas is the outlook at present. The snow storm on Sunday, added to the snow already on the ground, has made good sledding and the country populace is improving the opportunity to drive to Chariton and "swap" for Christmas gifts."

My mother, born east of Williamson earlier that year, always said "we're going to town to do our trading" before the drive into Chariton many years later to buy groceries. Trading --- the art of the swap --- was the way it had worked when she was a child. Farm families loaded children and produce --- eggs, cream, butter and other items --- into wagons, headed for Chariton and swapped the produce for merchandise (including the makings of Christmas) at Crozier's, Piper's and other stores around the square.

Out at Lucas, too, the correspondent was reporting that "The late snow has made excellent roads for sleds, and the school boy is devoting spare moments to coasting."

Runners often were attached to horse-drawn farm wagons and spring wagons when the roads were covered with snow and ice back in those days --- making travel easier. So those sleds on the road in 1914 were not for idle pleasure.

Back in Chariton as Christmas approached, Lucas County's hardiest Christians --- the Swedes --- were gearing up for their annual Christmas morning marathon --- Julotta.

Chariton's Swedish Evangelical Lutheran Church (now First Lutheran) was organized during November, 1869, and on Christmas morning a few weeks later --- because there was no church building --- the congregation had assembled at 4 a.m. in the courtroom of the 1858 Lucas County Courthouse to begin the celebration, most likely with high Mass, followed by Matins, as was the custom in the Augustana Synod at the time. The goal was to end the services before sunrise.

By 1914, the protocol had been relaxed a little. Among Lucas County Lutherans that year, Matins was scheduled to begin at 5 a.m., a preaching service at 6 a.m. and the Sunday school festival at 7 a.m. There would, of course, be feasting during the intervals between.

The Lutherans built their first building between 1875 and 1880 at the intersection of North 8th Street and Roland, but had replaced it during 1903 by the grand white frame confection that still stands there, although the congregation itself has moved to a new church in the north part of town. So the big 1903 "new" church was the site of 1914's Julotta.

Actually, two Julotta celebrations were scheduled in Chariton that long-ago Christmas morning. There had been a great nationwide rift among Swedish Lutherans during the late 1870s related to matters involving atonement and called the "Waldenstrom" controversy. As a result, Chariton's Lutherans had birthed under painful circumstances that had delayed construction of their church building a new Mission Covenant congregation. A traditional Swedish celebration was planned at that church, too --- but commencing at 5:30 a.m.

All the attention on Christmas Eve, however, would be directed toward the square where what was described as the "first municipal Christmas tree in this part of the state" had been erected, decorated and prepared for a countywide celebration.

Extra effort had been made all around the square that year to the make downtown especially festive. Here's how the Herald-Patriot described it in its Christmas Eve edition:

Chariton is in proper holiday attire for Christmas, streets surrounding the square never looking more beautiful than at this time. Pine trees hung with tiny colored electric lights appear on all sides of the square except the east side, where scores of colored lights make the entire street a place of which to be proud. A big star, covered with myriad lights represents the "Star of the East," and adds greatly to the appearance of the street and the spirit of the occasion. A blanket of snow covers up whatever might be offensive to the eye, windows are inviting and decorations were never better. The big municipal tree stands at the north of the court house and hundreds of youngsters are deeply interested in what is to happen tonight at that point.

The Christmas Eve program around the tree was scheduled to begin at 7:15 when the town band began to play and, at 7:30 p.m., school children under the direction of Miss Westling would perform a carol, followed by reading of the Christmas story, then a selection by the double quartet from First Lutheran. A prayer would precede the singing of "America," accompanied by the band, and that would conclude the official program.

Immediately thereafter, Santa Claus was scheduled to arrive on the square in a highly decorated automobile and begin the distribution of gifts.

All the stores would be open, of course --- as would the courthouse and its restrooms. But First Christian Church, then located in what now is the parking lot of Pierschbacher Funeral Home, announced, too, that its building would be "heated and lighted during the entire evening on Thursday so that all who care may have access to the comforts of the building."

Despite the fact Christmas Eve was very cold, the tree --- and the celebration --- was a huge success. Here's the Herald-Patriot report concerning it from the Dec. 31 edition:

The holiday season brought cheer to hundreds of kiddies because of the activities of older ones who exerted themselves to provide entertainment and some sweet things for them. Money was provided to do things right and those who managed the municipal tree are entitled to credit for the way they conducted the affair.

The tree was planted at the north side of the court house near the pavement and was beautifully decorated with colored paper, colored lights and other things to make it pleasing in the sight of the little people. Surrounding the tree and conveniently at hand were hundreds of little parcels containing candy, fruit and nuts and these were given to the children as soon as the exercises were ended.

The latter were quite brief because of the coldness of the night and the inconvenience a more elaborate program would cause those waiting in the cold. Music by the band, a song by the double quartet from the Swedish church, a reading of the Christmas story by Rev. IlgenFritz (pastor of First M.E. Church) and a Christmas carol by the school children made up an interesting program quickly rendered.

The distribution of the gifts followed and fully 1,500 packages were given the children assembled to receive them, every child being provided for and a number of packages being left over. These latter were returned to J.C. Flatt, who had furnished the candy and who sought other children who were unable to be present.

The night was quite cold, but weather did not prevent a big attendance. It was noticeable that the older folks were present in as large numbers as were the smaller ones, while teams from the country completely circled the square. It is probable that at no time in years at this season have so many teams been tied around the hitch racks as was the case last Thursday night, many of those teams being driven long distances.

Chariton's first municipal Christmas tree will be long remembered by those who were able to witness the bright lights of the tree and the still brighter eyes of the little people who attended.

And, I suspect, many Lutheran and Mission Covenant parents heaved sighs of relief when the program proceeded quickly and ended early, thinking ahead to Julotte --- and the need on Christmas morning to rise, hitch up the teams and head for church well before dawn.

Out in English Township, I discovered by reading the 1914 Christmas Eve edition of the Herald-Patriot, my mother's vast extended family was preparing to celebrate Christmas without its matriarch, my great-grandmother, Mary Elizabeth (Clair) Miller. My mother had been the newest arrival that year among dozens of her grandchildren.

Great-grandmother had boarded a train at the C.B.&Q. Depot in Chariton on Wednesday, bound for the high plains of west central Kansas to spend Christmas with her mother, Elizabeth Rachel (Rhea) Clair, and several siblings at the tiny town of Alton.

The trek from Lucas County to western Kansas had been a major enterprise in 1878, when my great-great-grandparents, James Wayne and Elizabeth Rachel Clair, had loaded eight of their children into covered wagons shortly after the new year turned and headed west, arriving in Alton during February.

Great-grandmother, the eldest, had recently married Joseph Cyrus Miller and was the only one of her siblings to remain in Iowa --- other than two brothers who had died four years earlier, one age 20 and the other a few weeks, and had been buried in the Columbia Cemetery.

By 1914, the trip was much easier. Great-grandmother set out on the short line to St. Joe in Chariton that Wednesday, then changed trains to cross the Missouri River and head west to Alton, located just before the end of the line, arriving well in time to celebrate Christmas.