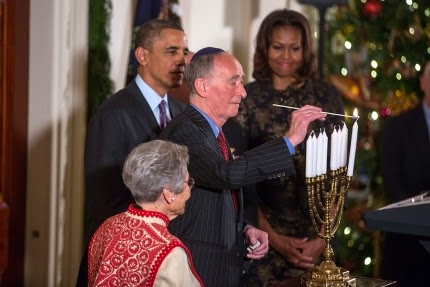 Holocaust survivors Margit Meissner and Martin Weiss light the menorah during a 2013 Hanukkah reception at the White House.

I've never lighted a menorah, since that would seem a mite pretentious for someone who is culturally Christian. But have made latkes with varying degrees of success and continue to increase my intake of doughnuts during Hanukkah, since it is customary to eat food cooked in oil.

Here's your reminder that, this year, the eight-day Festival of Lights begins at sundown today, the 25th day of Kislev on the Hebrew calendar, and continues through the 24th day of December on the Gregorian calendar. One candle a night until eight are lighted --- plus the shamash.

There are those who argue that Hanukkah, a minor festival, has been elevated out of proportion to its consequence because of its usual proximity to Christmas. But that's just being grouchy. There can never be too many occasions upon which to light candles against the darkness --- or too many doughnuts.

Surely, you're familiar with the story --- after the Maccabees has successfully driven the forces of Antiochus IV from the Temple in Jerusalem during the 100s B.C.E. and wished to rededicate it, they found only a single container of ritual olive oil that had not been profaned --- just enough to keep the menorah in the temple alight for one day. Miraculously, according to the Talmud, the oil burned for eight days --- the time it took to press new oil and prepare it for ritual use.

The miracle story works metaphorically on several levels --- the survival against all odds of the Jewish people on one; the potential within all humanity when we light candles against the encroaching dark on another.

Here's a little meditation that I like, presented by Reform Rabbi Irwin Kula. It's worth listening to.