Even the preacher's preserves weren't safe in 1868 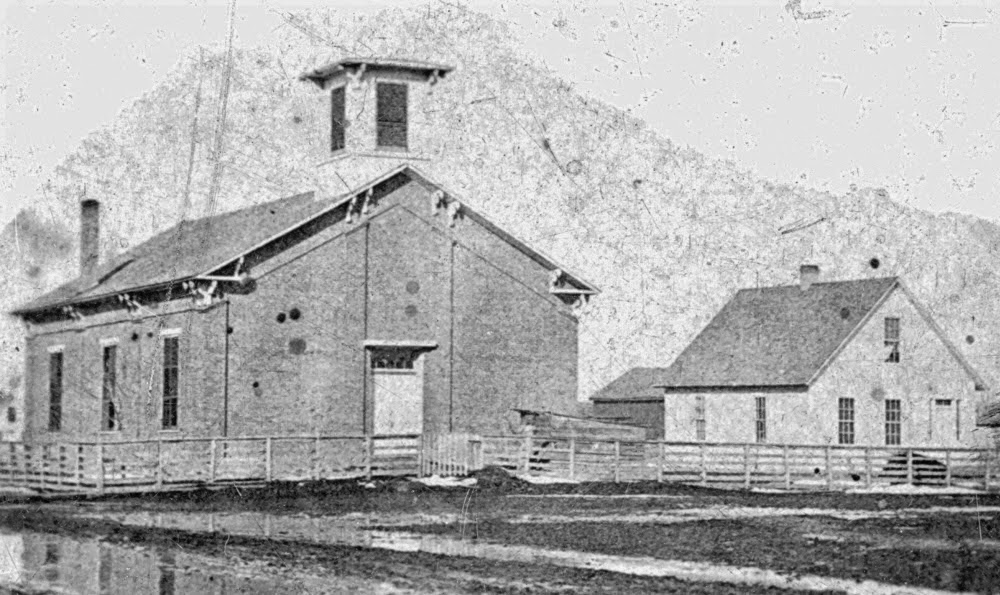 Scene of the crime: Brigands entered the Methodist parsonage cellar (to the right of the church here) during December of 1868, whilst a prayer meeting was in progress next door, and stole the preacher's preserves.

One thing leads to another: I set out this week to browse early Chariton newspapers in order to fuel a nice piece about the holiday season in Chariton back in the 1860s. But thanks to John V. Faith, editor of The Democrat during the closing years of that decade, ended up exploring Chariton's darker side instead. That guy had a nose for news, sort of.

I've written a little about John before --- Copperhead, racist, fast to attack and totally lacking a sense of proportion when it came to reporting. It seems likely, however, that many subscribed to The Democrat just to read what Faith would get himself up to next. And his issue of Dec. 3, 1868, did not disappoint. Here's the lead story:

For several days past, scandal-mongers have had their hands full in dealing out the circumstances of a double case of love and crime, the worst that Chariton has ever had, and we refer to it now only because the reports seem to have become common property. We omit to mention the names of either of the parties, for the reason that all of them are respectably connected, and what has already taken place must be sufficiently mortifying to the parents, without rushing their names into print; and we would wish to be the last to add anything to their pain.

It seems that two young men, whom we shall designate as G. and W., aged about 22 and 22 years, have been courting two young ladies in the west part of town, aged about 15 and 16 respectively. Both the young men were decidedly "fast," and their associations have not been of the most creditable character.

They had been waiting upon the young ladies in question for some months, but as there seemed to be nothing wrong, their relations to each other grew from love, on the part of the girls, to crime upon the part of the boys, and finally it leaked out that they had had such relations as the laws tolerate only between man and wife, and that the young girls were being hurried into the responsibilities of mothers.

The parents came together and consultations were had, resulting in the agreement on the part of G. to marry his girl, and the time was set. We have not learned what was being done with the case of W. and his victim, but as the time approached when G. was to repair, as far as in his power, the wrong he did, the boys decided upon the less creditable alternative, and since Monday, nothing has been seen of them, while the girls and the parents of all the parties are left to brook the shame as best they can.

The circumstances are extremely painful, and full of warning. Evidently, the young men did not realize the position into which they would bring themselves and their victims, else they would have remained and made the best of it. We are informed that one of the young men, W., found it necessary to leave his home in Ohio in consequence of a similar affair. We learn that the father of one of the girls intends to capture her betrayer at all hazards, and at whatever expense.

Regrettably, I cannot report --- nearly 150 years later --- what happened next. The Democrat issue of Dec. 10 is missing and no further mentions of these unfortunate circumstances were made in editions of either the 17th or the 24th.

John was thoughtful enough to not name names in the preceding report --- the parties were "respectably connected," after all, but the less respectable apparently were not similarly spared. Faith seems to have gotten himself in trouble by naming names in an earlier edition --- as this paragraph, also in the Dec. 3 issue of The Democrat --- suggests:

A certain fellow, connected with the railroad, and whose name we mentioned in connection with the unfortunate circumstances of the poor girl with whom he appeared to have improper relations, and who afterward attempted to poison herself, vows vengeance on the head of the editor of this paper, and whenever he goes around to the different saloons, drinking and pretending to be upon the hunt for the "Editor of the Democrat." We don't know the chap when we see him but will merely state that a saloon is not a good place to look for us, but that we are generally in our office from early morn till late bed-time, and if he wants to find us, he can easily do so. In conclusion, we will remind him that if he does not "draw in his horns, we will give him a setting-up as is a setting-up."

DENIES IT --- James Tout, whose name was mentioned in connection with the girl Anna Southard, who attempted to poison herself some time ago, and who has left the place, assures us that we were wrong when we stated that he took her away. We had our information from what we considered reliable authority upon other matters, and stated the circumstances as it was stated to us.

I could not locate the even earlier report that launched this drama, but can tell you that The Democrat's offices during December of 1868 were located in the 1858 courthouse --- the supervisors of that era raised extra money by renting out office space.

Other mischief was afoot in Chariton that long-ago December, too.

Under the Dec. 3 headline, "UNDER THE WILLOWS," John wrote, We would like to know the reason why those fast young men about town make so many nocturnal visitations to the little cottage under the willows, on the north side of the square. A huge local (sic) is brewing.

Then this follow-up paragraph in The Democrat of Dec. 17:

We are reliably informed that those "fast young men" visit the "cottage under the willows" for the purpose of hanging their "harps on the willow trees." Next question is, why do they stay so long?

Also scattered thorugh these December 1863 editions were reports of stolen mules, brigands who raided Chariton wood piles rather than chop their own and of an unfortunate gentleman who, while headed home from New York under the influence at night took a wrong turn at Freedom and ended up spending the night in his sleigh --- freezing his feet.

Even the clergy were not spared, as this item from The Democrat of Dec. 24 suggests:

DASTARDLY --- Some villains who feared neither the law nor the devil, entered the cellar of the Methodist parsonage last Thursday evening, while Preacher Pomeroy was conducting a prayer-meeting in the church, and carried off all his preserved fruits, and other delicacies. It seems they took advantage of the Domine's absence, and while he may have been praying for them, they were stealing from him. For the Parson, we'll say, "darn 'em."