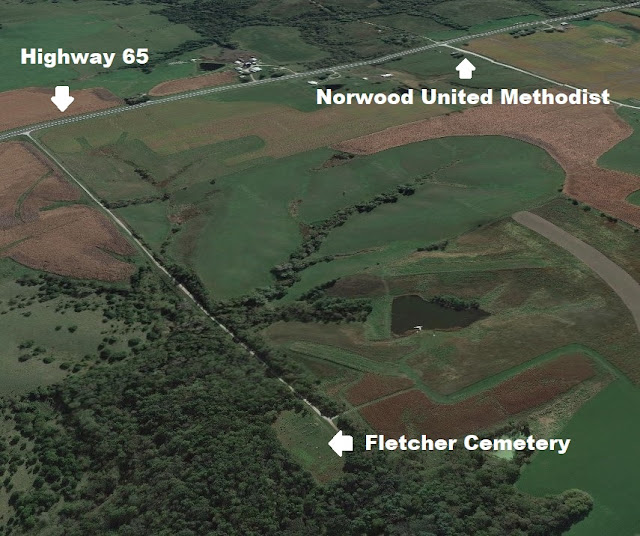 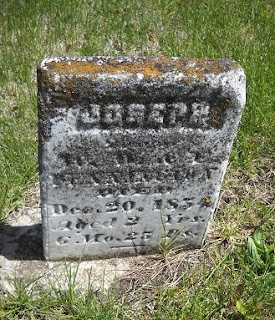 We've all heard of spelling bees and quilting bees, but back in 1921 neighbors out in Lucas County's most northwesterly township, Otter Creek, got together on a pleasant early October day to hold a cemetery bee. The Fletcher Cemetery grounds were straightened up, the two-acre site refenced and at noon, a picnic dinner was served.

We're fortunate that someone who identified herself or himself as "a participant" submitted the following report, headlined "A Cemetery Bee," for publication in The Chariton Herald of Oct. 12:

Thursday, Oct. 6, was chosen as the day for the old friends and neighbors to gather at the Fletcher cemetery and enjoy a picnic dinner and do a good lot of friendly visiting, and to set the grounds in good order.

The first grave was dug there in 1849. The settlers were then few. The first owner of the grounds was Alexander Lamb, grandfather of the Penningtons. A good road has been constructed to the grounds, making them accessible.

This fine old rural cemetery, it is said, is so high and dry that no water was ever seen in any of the graves. It is made sacred to so many because so many of the living have parents and other kindred of every relationship buried there in the 72 year since its beginning. Osage posts from the hedge fence, as durable as cedar, were brought, enough for the entire two acres and were set and the fence, as good as new, put up.

It was a sacred and enjoyable occasion and as religious as any meeting at a church, which warmed anew the fires of the old friendships and served to revive the old time good will of more than two generations.

Is it not true that our interest in our schools and churches and cemeteries marks out progress in civilization?

Fletcher Cemetery takes its name from Thomas (1808-1887) and Rhoda (1811-1894) Fletcher, who owned the land upon which the cemetery is located in 1872 when they deeded it formally to the public. It later passed to their son, John Cooper Fletcher.

But, as the article points out, the site was owned originally by Alexander and Rhoda (Trogdon) Lamb, who brought their family from Indiana to Otter Creek Township in 1853 and arrived with a combination of military land warrants and cash that allowed them to acquire a few hundred Otter Creek acres from the federal government between 1854 and 1856. The patent for the tract of land upon which the cemetery is located is dated Dec. 1, 1855. Alexander used  a military land warrant that he had purchased from a veteran of the War of 1812 to acquire it.

There's no reason to doubt the statement that someone had been buried on the site in 1849, but the first marked grave is that of a Lamb grandson, Joseph Pennington, who died on Dec. 20, 1854, age 2. His parents were William D. and Eleanor (Lamb) Pennington.

Alexander and Rhoda Lamb sold their holdings in Lucas County during the Civil War and, in 1864, moved west to the vincinity of Rohnerville in Humboldt County, not far from the Pacific in northwest California. Abigail (born 1807) died there on Sept. 29, 1871.

By the time the 1880 federal census was taken, Alexander, age 74, had returned to Iowa and was living with the Penningtons in Otter Creek Township. He died there on May 10, 1886, age 80, and was buried in Fletcher Cemetery.

Fletcher seems a little remote now, surrounded by woodland, and apparently there was no public access road to it until the current lane, which dead-ends at the cemetery, was constructed by the county as a through road prior to 1912.

But what now is the Norwood United Methodist Church was organized near the cemetery during 1854, according to an account by the Rev. E.W. Curtis, a native son, published in The Herald-Patriot of Sept. 27, 1928.

According to the Rev. Mr. Curtis, "The meetings were held in a one-room log house in the timber north of the Fletcher cemetery. The house had one door, one window and no floor. A short term of school also was taught in the same building."