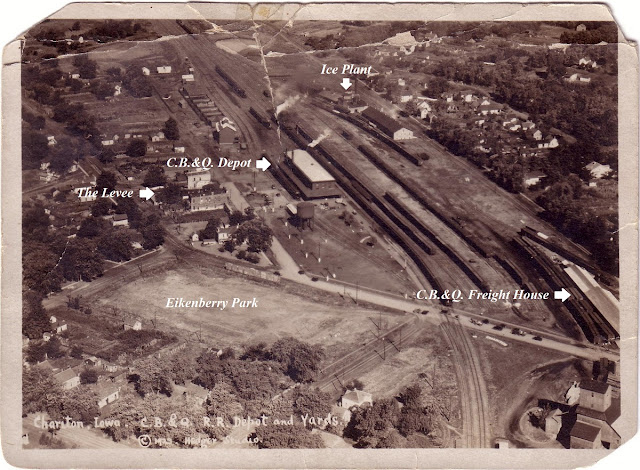 Chariton's legendary "Levee" was a small commercial area that developed just west of the C.B.&Q. Depot in the northwest part of town. With the exception of Full Faith Christian Center --- converted from the former Eagles lodge building --- nothing remains.

But in its day, the Levee generally was looked upon --- with some justification --- as the epicenter of wickedness in Lucas County's county seat.

When First Church of the Nazarene, organized during March of 1912 as a mission of Mason Church of the Nazarene in English Township, the editor of The Chariton Leader, Henry Gittinger, seems to have concluded that redemption had arrived for the Levee. He announced it with the following story on the front page of The Leader of May 30:

"The 'Levee' in former times carried with it a reproach. The term meant the place where whiskey joints abounded and lawlessness reigned over righteousness. They were not all bad people who resided in the district known as the 'Levee' but it is true much went on there that should not have occurred, and in the annals of the city some very grave and penal offenses have been committed.

"A vast change has come. The Levee seems to be as peaceable as any other section of the city. In fact, a church has been organized a short distance from there and a class of devout people hold regular services --- the Church of the Nazarene. These services are held on Sunday evenings and consist of praise by songs, prayer and a sermon, the preacher coming in from the church several miles out in the country.

"H.M. Finch, of Pleasant township, came in one Sunday evening to attend these services and told the Leader that much good was resulting and that spiritual faith could not be denied. It is true they have no church house but hold forth in the various homes. Certainly this is a most gratifying condition. Instead of the 'Levee' there is now a shrine. Let the good work go on. Earnest men and women are in the effort."

Henry's optimism regarding the Levee was premature. It continued to enjoy a rough and tumble reputation for many years to come.

But he was right to be optimistic about the Nazarenes. They constructed their first building --- a frame structure --- during the spring of 1913 three blocks south of the Levee at the intersection of North 12th Street and Braden Avenue and flourished. The congregation's large brick church at the same location was dedicated during September of 1951.

Mason Church, in English Township, closed its doors about 1950 --- meeting the fate of a majority of Lucas County's other rural churches as neighborhood population declined and the bright lights of Chariton beckoned.
Posted by Frank D. Myers at 6:41 AM