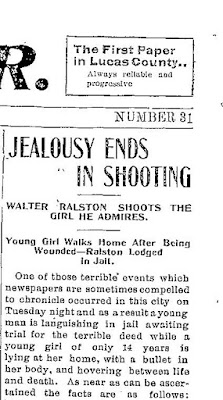 Ruth Campbell, daughter of James A. and Nina Campbell, was only 14 when a jealous boyfriend some five years her senior, Walter Ralston, shot her in the chest outside his home in north Chariton on night of Aug. 2, 1904.

This was the sort of thing that didn't happen is the "good" families of Chariton. James Campbell was a well-connected attorney who had edited The Chariton Leader for some years before switching professions and launching what was described as a very promising career in his hometown. Walter was the son of Sam Ralston, a highly respected conductor on the trains traversing the southern branch  of the C.B.&Q. between Chariton and St. Joseph, Missouri.

So naturally there was considerable shock and gossip about the tragedy was confirmed when The Chariton Leader published the following in its edition of Thursday, Aug. 4:

One of those terrible events which newspapers are sometimes compelled to chronicle occurred in this city on Tuesday night and as a result a young man is languishing in jail awaiting trial for the terrible deed while a young girl of only 14 years is lying at her home with a bullet in her body and hovering between life and death.

As near as can be ascertained the facts are as follows: Young Ruth Campbell in company with Rex Rethereford, and accompanied by another young man and woman, had driven to Lucas on Tuesday evening, returning home about 11:30. Miss Campbell got out of the carriage about a block from home and started to walk the rest of the way while her companion took the team to the livery barn. She had taken but a few steps when she met Walter Ralston, with whom she had been keeping company for some time. He asked her to take a walk and they went several blocks, going to his father's residence near North Park.

When they got in front of the house, young Ralston went in and got a revolver and came out and fired two shots at Miss Campbell, one of the bullets striking her in the breast, just above and a little to the left of the waist line, and passing through the left lung. It went straight through and lodged in the fleshy part of the back.

S.B. Ralston, the young man's father, was awakened by the shots and ran out to the gate in time to prevent his son from committing suicide, as the latter had turned the revolver on himself with the intention of ending his own life. Mr. Ralston took the weapon away from his son and then turned his attention to Miss Campbell, who had gone into the Ralston home seeking the protection of the young man's mother.

She was apparently but little hurt and the parents of young Ralston compelled him to accompany her home. She walked the entire distance, about six blocks, and walked into the dining room where her mother was sitting, exclaiming "Mamma I have been shot."

Mrs. Campbell was horrified but at once accompanied her daughter to the latter's room upstairs where the girl disrobed and an examination of the wound was made. Mrs. Campbell was at home alone with two younger children, and they were speedily aroused and sent for medical assistance.

On the way they met the night watchman, Hans Beck, who accosted them and learning of their mission he assisted in summoning Drs. A.L. Yocom and T.P. Stanton, and then went to the Campbell home where he learned the particulars of the story. He then went to the jail and aroused Sheriff Boss and together they went to the Ralston home where they found Walter in bed, he having made no attempt to escape after accompanying Ruth to her home.

He was taken to the jail where he now awaits preliminary hearing which will be held Saturday before Mayor Bowen. He will probably waive examination.

What passed between the two before the shooting took place is not known as neither one has made any statement. It is said that the young man was under the influence of morphine and had also been drinking and was jealous because Miss Campbell had been out driving with another young man, and had committed the deed while in a frenzied condition. But whatever the motive he will probably have to pay a heavy penalty for the terrible crime.

Miss Campbell passed a comfortable night and as we go to press is resting easy. The bullet is still in her body but the physicians think that it will not cause any serious trouble. It may have penetrated the stomach as it passed through her body and if it did there is some danger of peritonitis. Pneumonia may also result from the wound to the left lung; but if nothing develops from the injuries she will probably recover and her many friends earnestly hope that this will be the case.

Ruth Campbell is the daughter of Attorney J.A. Campbell and wife who have resided in Chariton for a number of years, although Mr. Campbell is now in Kansas City where he has been practicing law for several months. Walter Ralston is about 19 years of age and is a son of Conductor and Mrs. S.B. Ralston. The relatives of both Miss Campbell and Mr. Ralston, who are grief stricken over the terrible affiar, have the deepest sympathy of the entire community.

As it turned out, young Ralston did not pay a "heavy" penalty for his crime, so far as the law was concerned at least. He was jailed immediately and charged with assault in an attempt to commit murder, but as Ruth's wound apparently healed the case against him was carried forward and during December, he was released on $1,500 bond. During January, when it appeared that Ruth would recover completely, charges were dropped.

In the meantime, James and Nina Ralston moved their family --- including Ruth --- to Kansas City where he had established what promised to be a flourishing practice. But during March of 1905, Ruth took a sudden turn for the worse and died, as reported upon as follows in The Chariton Patriot of March 23:

Miss Campbell had apparently recovered from the wound when the family moved from Chariton. For the past two weeks, however, she had been under the care of her physician. About 12:30 o'clock Tuesday night the girls mother heard her gasping for breath and, when she reached her daughter's bedside, found her dead. It is said that an ulcer which developed in the wound affected her heart. She was only 15 years old.

On the night of August 2, Walter Ralston, jealous and enraged because the girl had received attentions from other boys, fired the shot which resulted in the death of his girl sweetheart. The crime was committed in the yard of the Ralston home. He was arrested and placed in jail. An indictment against him followed, but the case was dropped because the girl and her parents refused to prosecute. It was thought she would recover.

Mr. Campbell moved his family from Chariton to Kansas City last fall. He has a law office in the New York Life building.

Young Ruth was buried in a Kansas City cemetery near her new home and while consideration was given to charging Walter Ralston again now that her death had occurred, the family applied no pressure to do so and the county attorney declined, so the youthful killer apparently was free and clear.

In the years that followed, the Campell family endured another tragedy when Ruth's younger brother, James Hayden Campbell, died of typhoid at the age of 17 during 1908 while attending school in Springfield, Missouri. His remains were returned to Chariton for burial in a grave that has remained unmarked.

These tragedies had strained the marriage of James and Nina Campbell and they were divorced. James then moved from Kansas City to Chicago, remarried and established another law practice.

The Ralstons, meanwhile, had moved from Chariton to the St. Joseph end of Sam's route as a conductor on the south branch and by 1915, Walter was living with them again and working as a cook in St. Joe. Whatever devils had been plaguing him overwhelmed him on Sunday, Jan. 10, he died by suicide. The following report appeared in The Herald-Patriot of January 14:

Conductor Sam Ralston and family, of St. Joseph, Mo., will have the sympathy of many Chariton friends in the death of their son, Walter, which occurred at the hospital in St. Joe on Sunday morning. About a week before, he drank a quantity of carbolic acid with suicidal intent, and lived until Sunday morning when he quietly passed away. The family lived in Chariton several years ago and will be well remembered here.

There was one more tragedy in store for the players in this sad drama.

James A. Campbell had by now established himself as an attorney of considerable promise with offices on an upper floor of the Hartford Building in downtown Chicago.

On the morning of July 19, 1917, James entered the elevator en route to his office. Having reached his floor and mid-stride through the open elevator door, the elevator operator somehow miscalculated at its controls and the car shot upward.

James A. Campbell was crushed to death instantly.
Posted by Frank D. Myers at 6:56 AM