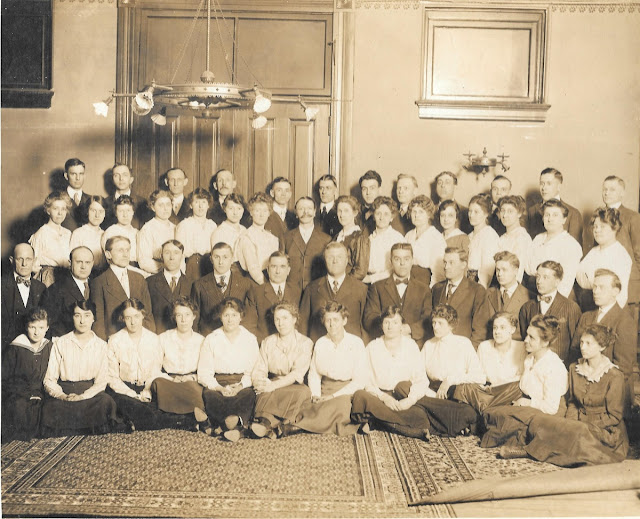 This is the Chariton Choral Society, some 50 musicians strong, organized during 1916 primarily to give Lucas County a credible voice in the annual Iowa Eisteddfod, scheduled for Thanksgiving day that year in Albia. While it's not clear who decided to reclaim Lucas County's choral tradition and form the group, the director was the small man in the middle of the third row, David R. Davis, a Welshman who made his living as a coal miner but who lived for music.

I'd love to know more about Davis, known as "the professor" and a resident of the Monroe County coal mining town of Hiteman, but his story seems to have been for the most part lost. When he died at the age of 62 during November of 1930 at the home of a daughter in Waterloo, his remains were returned to Albia for burial in Monroe  County --- but his grave seems never to have been marked and he has vanished, almost without a trace.

For the uninitiated, an Eisteddfod is a traditional Welsh festival of music, poetry, drama and art. The concept was introduced to Iowa as Welsh coal miners and their families began to flood into southeastern and south central Iowa during the 1880s.

The Iowa Eisteddfod Association was organized at Oskaloosa during 1889 and for 30 years thereafter annual festivals were held --- on Thanksgiving in later years at least. For a time, the Eisteddfod was held in Oskaloosa, then Ottumwa, one year in Des Moines and then finally came to rest in Albia --- in large part because of the strong Welsh choral tradition in nearby Hiteman where the chorus sometimes was 200 voices strong.

The first Eisteddfod entries from Lucas County, during the 1880s, were organized in the coal mining town of Cleveland where a majority of the mining families were Welsh and a strong tradition of choral singing developed. But Cleveland had for the most part vanished by 1900 as the coal industry in that part of the county faltered and many mining families moved on.

Once revived in Chariton during 1916 with a membership that had a majority who were not Welsh, the choral society was well organized enough to field credible entries in the Eisteddfod of that year --- performing as mass choir, a smaller mixed chorus, a men's chorus, in smaller ensembles and as soloists.

Encouraged, the society flourished during 1917, holding regular practice sessions, giving benefit concerts for worthy causes, performing in churches and in other Lucas County towns. The highlight of the year, of course, was the Eisteddfod in Albia on Thanksgiving day.

Then World War I intervened, and that proved fatal to the Chariton Choral Society. The supply of male voices dropped sharply as young men went off to war during 1918 --- and when it became clear that nothing could be prepared adequately for that year's Eisteddfod, the group disbanded.

The Iowa Eisteddfod Association managed one more Thanksgiving festival after that --- during 1919 --- and then faded away itself after 30 years during which it had enlivened these southern hills of ours with the sound of choral music.

There are names written on the back of this photo --- from the Lucas County Historical Society collection, but the list is not complete so Prof. Davis is the only face I can identify with certainty. And some of the names here I suspect are not spelled correctly.

There is my great-grandmother, Zora! Her son, Bob Simmons, was a singer all of his life as well. Thank you so much for posting this.