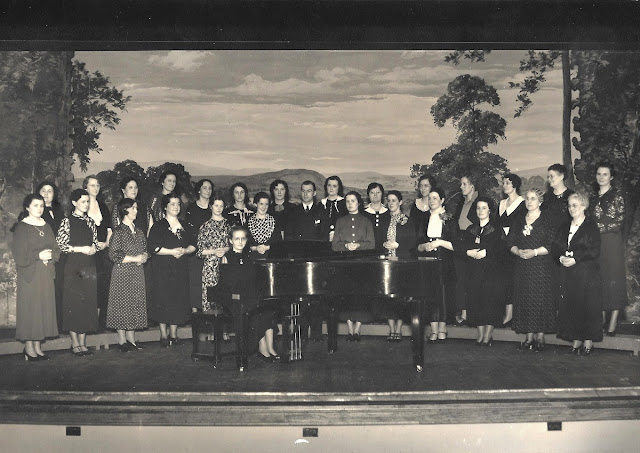 More than 500 Lucas Countyans were gathering in the Chariton High School auditorium on the evening of Wednesday, April 8, 1936, when this fine portrait of The Cecilians chorus was taken. It was the first public concert for the choral group, directed by Kenneth E. Hartzler, and those in attendance had paid 25 cents or 10 cents for admission, depending upon age.

Everyone involved was gratified by the response.

Hartzler, musical supervisor in the Chariton schools, had organized and trained the chorus of some 30 voices during the preceding months at the behest of the Chariton Woman's Club. Chariton already had a mens chorus, widely known in part because of a number of appearances on Andy Woolfries' "The Music Shop" program, broadcast live over WOI-Radio, Ames.

Woman's Club members wanted to provide the same opportunity for women. The group took its name from St. Cecilia, the patron of musicians.

A year later, The Cecilians were recognized as sufficiently accomplished to merit an invitation of their own to appear on The Music Shop, a performance scheduled for 5 p.m. on April 14. Here's the program Lucas Countyans --- and others --- heard as they gathered around their radios for the late afternoon broadcast: 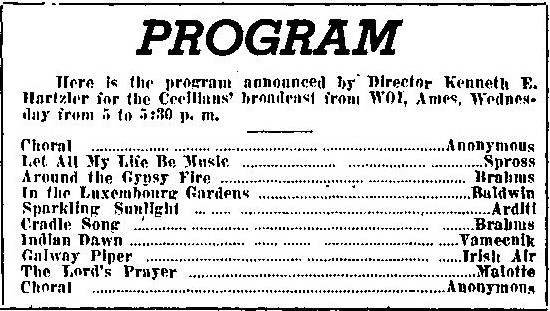 A month later, however, Hartzler resigned his position in the Chariton schools to accept a position with the Boise, Idaho, public schools that would lead to a long and distinguished career in that state. The Woman's Club expressed their appreciation by presenting him with a watch in recognition of his efforts --- but The Cecilians did not survive his departure.

I was delighted to find my grandmother, Mrs. Leila Tinder, and aunt, Dora Mae Tinder, in your picture of the Cecilians.