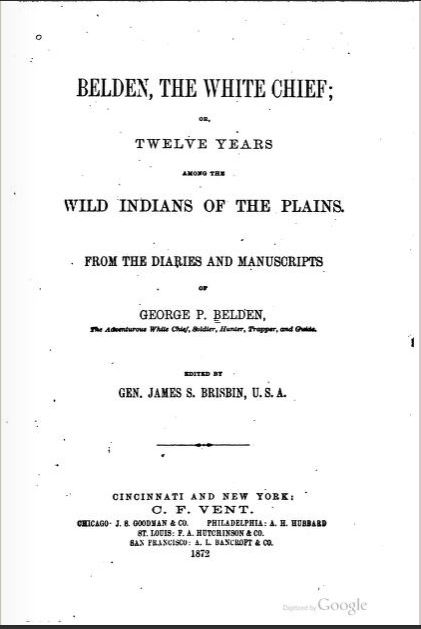 "Belden, The White Chief; or Twelve Years among the Wild Indians of the Plains" was a literary sensation back in 1870. Authored by a young man named George P. Belden who characterized himself as "Adventurous White Chief, Soldier, Hunter, and Guide," the volume was a best-seller, too --- and remains on the market today.

Tragically, George's image was burnished and sales skyrocketed after he was murdered in what became South Dakota, somewhere in the neighborhood of modern Mobridge, on the 1st or 2nd day of September, 1871. Now, due to the oddities of life (and death), George reposes in Iowa's Keokuk National Cemetery, his remains transferred there during November of 1908 from the post cemetery at Fort Yates, North Dakota.

The name on his tombstone, "G.G. Belden," is a mistake. It should have been "G.P. Belden" and the fact it isn't may account for the fact he's been sort of misplaced.

Keokuk National Cemetery was George's third postmortem stop. Buried initially at the Grand River Agency Post, near Wakpala, South Dakota, at the intersection of the Missouri and Grand rivers, his remains were first evacuated to Fort Yates when periodic flooding resulted in the closure of that post during 1875.

It's kind of appropriate, I suppose, that someone so restless in life should face similar challenges in death.

Here's an account of George's terminal adventure as published in The Junction City (Kansas) Weekly Union of Sept. 30, 1871. Similar reports, although not all this detailed, were published across the United States. This report most likely was picked up from an Omaha newspaper, although initial reports of the dashing young adventurer's death probably were published in the Sioux City Journal.

"On or about the 2nd of September, George P. Belden was murdered --- it is supposed by an Unkpapa Indian --- near Grand River. A dispatch dated Grand River Agency, Dakota Territory, September 5th, to the Sioux City Journal, gives the following particulars of his death:

" 'Georbe P. Belden left Grand River Agency, D.T., September 1, 1871, to go to Grass Camp (Blackfeet Sioux), about thirty-five miles below this agency, on the west bank of the Missouri river. He had about $50 worth of goods that he had purchased at Durfee & Peck's trading store. A Saus-Arc Sioux Indian left the agency for Grass Camp about an hour after Belden, and arrived at the camp at 5 o'clock, but he said he had not seen Belden on the road. George Corry, from Grass Camp, arrived at this agency about 5:30 o'clock on the 2d instant, and he inquired about the time Belden had left the agency. He was told as above stated. He said that, on his way up, he went to drink at a pool of water, about fifteen yards off the road, and saw Belden lying dead in the water. He did not examine the body, but came to the agency as soon as possible. He was on foot.

" 'Agent O'Connor immediately started on horseback, accompanied by an escort of ten soldiers in a wagon, together with six citizens, and six Indians on horseback, to bring in Belden's remains. Three of the citizens and two of the Indians arrived at the point indicated about dusk, and found Belden's remains at a pool of water, surrounded by tall grass, and located on the right-hand side of the road, about thirteen miles from the agency. He was lying on his back in the water, his legs straightened out stiff, and his arms across his body. He was taken out and laid on the bank by Bruguler and Keller, who lit matches and examined the body. They found a large bullet hole, the ball having broken the bridge of his nose and come out the back of his head. His brains were oozing out of the hole. He was not scalped, but his skull was broken.'

"Apart from the interest attached to the circumstances of his melancholy and untimely end --- he was only 29 years of age at the time of his death --- Mr. Belden was a man of sufficient mark to warrant the appointment of space wherein to tell briefly the story of his life. George P. Belden was born in the State of Ohio. His father was a printer, and together they started a weekly newspaper, called the Newark Valley Journal. Twice he ran away from home, and until the day of his death led a strange, adventurous life, now among the Indians and now among the printers and literary men of his native state. He resided for a time in Omaha city, working at first as a compositor in the Herald office, and afterward acting as local editor of the Republican.

"But for the restlessness of his disposition and his perpetual craving for adventure he might possibly have won for himself a high place in literature. As it was, with all his drawbacks, he was a fluent writer, and some of his productions exhibit considerable grace. Many of his letters to the New York Tribune and to the Chicago Tribune, to both of which papers he was a contributor, have been greatly admired, and some ambitious works have achieved popularity. Notable among these latter may be mentioned his book entitled "Belden, the White Chief; or, Twelve Years Among the Wild Indians of the Plains," which is very widely known.

"He was intimately acquainted with the habits of the Indians and could speak several Indian languages fluently. During the war he held a commission as lieutenant in the army, but disliking the restraint of a soldier's life he left it and returned to his former erratic mode of life. He was married, but the restraints of wedded life was as little congenial to him as were all other restraints, and he had been separated from his wife for some years before his death. Yet he was of a genial nature, and during his wanderings made many friends who now mourn his loss."

Much of what was reported about Belden nationwide after his death was based upon the biography outlined in "The White Chief," a mighty volume of more than 300 pages. How much of it was accurate --- well, that's another matter. I'll try to unpick the life and times of George P. Belden a little another time.