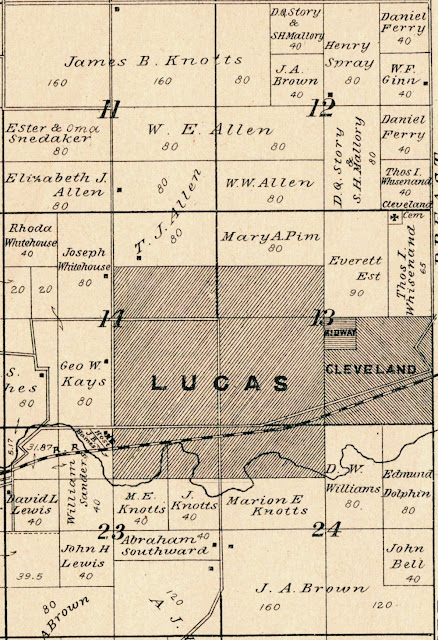 Nearly everything was right with the world in Lucas County's coal mining boom town of Cleveland just before Christmas, 1887, when a reporter for The Chariton Herald spent two days there, then filed the following report, published on Dec. 22.

Founded during June of 1878 by the White Breast Fuel & Mining Co. to house its employees, the village population was at its peak that winter --- some 800 souls. The men in these families were with few exceptions employees of the mining company, most miners, some in support roles. Some of the miners had purchased lots and owned their own homes; many others rented company-owned housing.

Children were educated in a substantial two-story frame building. The only major mercantile business in town was the Trader's Supply Co. (also known as Western Supply Co.) Although not owned by the mining company it was owned by the men who owned the mines, so it was very much a company store. Miner's Hall was the principal gathering place. There were no saloons --- deed covenants prohibited sale of alcohol inside city limits (there were plenty of watering holes nearby, however).

Like their neighbors to the west in the larger town of Lucas (then with a population of about 1,300), Cleveland residents, perched on hillsides, looked out their windows across the main line of the Chicago Burlington & Quincy Railroad to the White Breast Creek valley to the south. Here's The Herald report:

Cleveland is located in the west part of Lucas county, and its incorporation joins that of the city of Lucas on the east. Here is located the most extensive coal mines in the state, and yet there has been so little said as to the value of these mines that few people even in the county are aware of the amount of money brought in and paid out monthly in the county by the proprietors of the Cleveland mines.

Cleveland contains a population of about 800 and, like Lucas, it is located on the breaks of White Breast Creek and possesses magnificent drainage, and is a very healthy town.

The citizens of Cleveland are mostly miners or those who are on the pay roll of the Whitebreast Coal and Mining Company. The miners are largely of foreign birth --- English, Scotch, Welsh and Swedes. Among them are a number of men that are well educated. We were informed that among them are graduates of old country colleges, men who read and are well posted as to science, religion and politics.

Many of the miners are members of some branch of the Christian church. As with a large portion of our citizens of foreign birth, many of them are opposed to prohibition. They have been raised with the idea that there is no harm in taking a drink of beer or other stimulants and they cannot comprehend why these privileges should be prohibited, though many of them are in favor of legal restrictions on the sale of intoxicants.

As a rule, they are in favor of broad and liberal education and put forth every effort to send ther children to school. While spending two days in the town we seldom saw a boy on the street during school hours, and a more orderly town cannot be found in the state. We saw no one intoxicated and heard no profanity. The fact is, the miners are generally engaged and work, and Satan cnnot use an industrious man. Miners as a class are industrious, but they wish to make good wages; and if any class of laborers are deserving of good pay it certainly is the miners

The present city government consists of the following officers: Mayor, John Mason; Councilmen: Ed. Evans, T.J. Phillips, John Rose, S. Daniels, Jas. Birchell and Wm. Palfreyman; Recorder, John Verner. The schools of Cleveland are under the superintendency of Mr. H. L. Byers, who also teaches in one of the rooms in Cleveland. The other rooms are taught by Laura McIntyre, Nettie Poucher and Hugh Main. The schools are prosperous and the attendance excellent.

The mercantile business is mainly done by the Trader's Supply Company, a separate company from that of the coal interests. They do an immense business, supplying the employees of the mining company with anything in the mercantile line both of food and raiment.

The White Breast Coal and Fuel Co. owns and controls a vast area of lands in the county, acquired by purchase and leasing. They have 800 men on their pay roll and pay out monthly over twenty thousand dollars to their employees. The company has already sunken the third shaft, and when they get than in full working order they expect to raise from 1,500 to 2,000 tons per day. This output exceeds that of any other coal interest in the state and the people of Lucas County should feel a large degree of pride in the progress of this enterprise, which we believe is only in its infancy.

The company owns a mining interest at Swan, in Marion County, where they are putting out 400 tons of coal daily. T.J. Phillips is general superintendent of the Company's interests in Iowa. He was installed as superintendent in 1880. He thoroughly understands the business in every detail, having swung the pick before his promotion. The miners generally are pleased with his courteous and fair treatment, and he is deserving of great credit for the successful manner in which he has fulfilled his trust.

With 800 men under his control and management, there is less trouble than is often found in some of the small mines of the state. This is partly accounted for by the fact that he has sought to give steady employment to his men They aim to keep going every working day of the year. They find no difficulty in disposing of all the coal they can get out at fair prices. The screen question seems to he the principal matter of complaint among the miners Like the tariff, it is a knotty question. We heard both sides of this question, and, although difficult to settle it seems to us that a plan might be devised that would give better satisfaction to the miners, and at the same time do no injustice to the company. As long as the present plan is followed there will be dissatisfaction on the part of miners.

While on our visit, we had the pleasure of attending a very fine concert at the Miner's Hall, given by the local choir of singers who are training to enter a grand contest which will be held at Ottumwa on the 24th inst. where $300 is to be distributed as prizes. The choir is composed of sixty members and contains as fine musical talent as can be met in the state. The exhibition was a fine one. Only about one-third of the class was engaged on the program. Gen. Supt. Phillips announced the program and he allowed no time to go to waste, while the audience was held spell-bound for two hours and a half by the soul-stirring strains that fell upon the enraptured ear.

There were, of course, a few things not noted by The Herald in this report. Black miners and their families, some 200 or more people, occupied segregated housing in the unincorporated area closer to the mines just east of Cleveland in an area known as "East Cleveland." They had been recruited and brought to Lucas County with their families, commencing in 1881, to break strikes by white miners and serve as reminders to those worthy Welsh, Scots, English, Swede (and Irish) miners that they could be replaced if necessary. Black children attended a separate school.

The Herald reporter refers to "screens" as an issue dividing miners and managers without explaining what exactly was going on. At the time, miners were paid not by the hour but by the volume of coal each sent to the surface in cars tagged with identifying numbers. Once at the surface, the coal passed over screens where dirt and smaller chunks dropped out. Larger chunks of slate, sulphur-infused rock, bone (impure) coal and blackjack (shale) were removed by hand. Then, and only then, was the coal weighed and the amount due each miner noted.

Miners generally wished to be paid by the weight of what came out of the mine before screening, pointing out that this would more accurately reflect their time and labor. Mine owners resisted, pointing out they could not market waste even though it occurred naturally. At the time Cleveland flourished, this was a never-ending source of controversy.

Shortly after The Herald report was published, mining in western Lucas County began to decline. The last of the White Breast mines closed during May of 1891 and by the turn of the 20th century, "old" Cleveland had for the most part vanished. There's nary a trace of it today, other than Fry Hill Cemetery high above, named after Shadrack Fry, a young Welsh miner from Cleveland who died during 1880 of a "lung complaint" and was the first buried there.

Some years later, the name "Cleveland" was reclaimed and applied to a much smaller mining camp --- "New Cleveland" --- located around a short-lived mine southwest of Lucas in what now is Stephens State Forest.

Big-time mining revived in Lucas County after the Rock Island line was completed in 1913 and flourished until the late 1930s, finally sputtering out when the Big Ben mine closed during 1978.