For those who mourn: The longest night 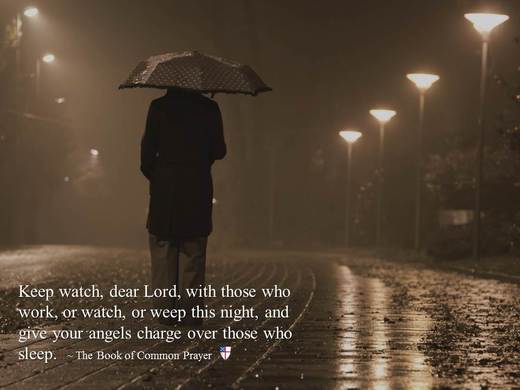 St. Andrew's, last evening, served as host for Chariton's annual "longest night" service, sponsored by the Interchurch Council as a quiet time of candlelight, carols, lessons and prayer in a busy season when "Merry Christmas!" sometimes can seem like more of a command than a benediction.

It had been a gloomy day, spitting rain well into one of the longest nights of the year, following the winter solstice. My job was to light most of the candles (21 of them; I counted) since I'm the most adept at climbing to the top of a stepstool (before anyone arrives) in order to reach the "big six" that march across the back of the high altar. Also to serve as stand-in if one of the readers didn't show --- and sure enough, one who lives more than 20 miles distant decided to stay home by the fire rather than venture out onto rain-slick highways.

The point of the service is to acknowledge loss --- not just loved ones, although that's an important component and several were there to mourn, but also losses of security, self-confidence, health, peace of mind, even faith --- and the part these losses play in the lives of many at a time of the year we're often told should be the most joyful.

These services also are known sometimes as "blue Christmas." I tried to track down the source of the liturgy we used; it seems to be a simplified version of something developed several years ago by a young Episcopal priest, Heather Hill. But that's not especially important.

The little prayer that follows was not part of the service, but it is among my favorites in the Episcopal Book of Common Prayer. We call it the "compline prayer" because it is part of the liturgy for Compline, the final service (office) of the day in traditions where time still is shaped by the ancient canonical hours. We use it most often at St. Andrew's as Evening Prayer is ending.

By all means, wish everyone you meet a "Merry Christmas!" if it seems appropriate as the big day approaches, but remember that these words are intended to be prayerful, not an order.

If you're so inclined, pray too as evening settles in: "Keep watch, dear Lord, with those who work, or watch, or weep this night, and give your angels charge over those who sleep. Tend the sick, Lord Christ; give rest to the weary, bless the dying, soothe the suffering, pity the afflicted, shield the joyous; and all for your love's sake. Amen."
Posted by Frank D. Myers at 7:07 AM