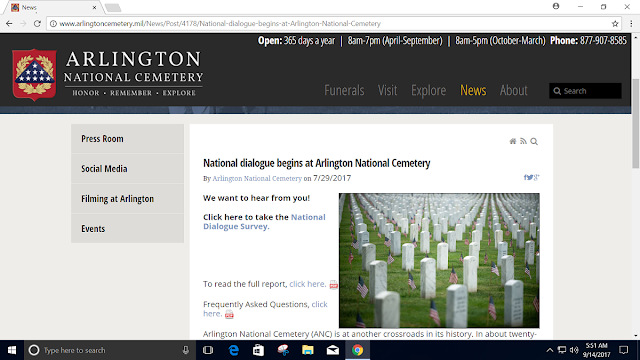 I took a few minutes the other day to complete a brief survey intended for "stakeholders" in Arlington National Cemetery. Since you're among those stakeholders, too,  follow this link to read more about it and participate, if you like.

Arlington, under jurisdiction of the U.S. Department of the Army, has near iconic status as the final resting place for more than 400,000 of our honored dead. But it is facing a major challenge, as has happened before now and then --- lack of space.

Currently, according to Arlington officials, approximately 160 interments occur every week at the national cemetery. At that rate, the cemetery will be full by about 2041 despite the fact the ongoing "Millennium Expansion" will have added 27,000 new gravesites/inurnment niches by later this year.

Four options are under consideration --- allow the cemetery to fill up, then maintain it as a monument rather than as living history; expand the cemetery; further restrict interments; or a combination of the latter two options.

Expanding the cemetery is not a simple or inexpensive alternative. Arlington is completely surrounded --- by highways, Fort Myer, the U.S. Marine War Memorial, other installations and, of course, the Pentagon. So property would have to be cleared and new construction undertaken elsewhere in order to allow for more space. The expansion project nearing completion now cost roughly a quarter of a billion dollars.

In-ground burials already are restricted at Arlington. As an honorably discharged veteran of Vietnam but of no particular distinction, for example, my cremated remains could be placed in a niche there --- but burial is not an option.

And truth be told, it seems unlikely too many Iowans are interested in interment at Arlington. We have our own small national cemetery in Keokuk, probably underutilized because of its location on Iowa's southeastern tip, but the new Iowa Veterans Cemetery west of Des Moines is a lovely and evocative place for those who are eligible and wish to be buried in a military setting.

So what do you think? Go ahead, follow the link and take the survey. It's a chance to be heard in a modest sort of way --- and you'll learn a number of things about Arlington that I'll bet you didn't know.