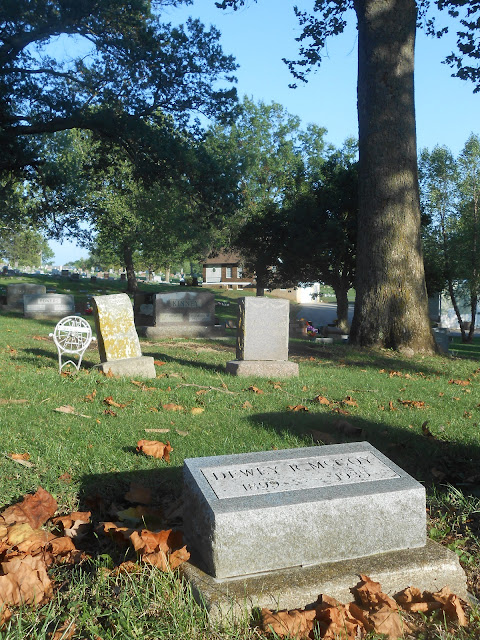 Lucas County, in general, always has been a relatively peaceful place. But the Chariton Cemetery is the final resting place of many who died violently elsewhere, then were brought home to these gentle hillsides.

That certainly is the case with Dewey Rex McCoy, buried here during mid-June 1935 at the age of 36, killed by curiosity combined with police gunfire, an example of the occasional cost of being in the wrong place at the wrong time.

Dewey was a Lucas County native, among the older of 15 children born to John W. and Anna J. McCoy, who were living near Derby at the time of his 1899 birth. He grew up on farms at various locations in Lucas County, then his parents settled permanently just north of Chariton. One of his older brothers, Kenneth, had been killed in combat during 1918 in France.

When about 20, Dewey moved to Omaha in search of a job. He married Cleo B. Curtis there during February of 1924 and, at the time of his death, was employed as a folder and printer. He was the father of three young children, Mona Irene, 7; Anabelle Lee, 5; and William Norman, 4.

Omaha, during the years of the McCoys' residence there, had a well deserved reputation for violence, often motivated by issues of race and by labor attempts to organize.

Gurdon Wattles, a wealthy Omaha banker who owned the Omaha Traction Co., provider of streetcar service to the city, became the poster boy for business interests determined to resist unions at all costs. The violence commenced during September of 1909 when Wattles quashed a strike by street car workers by bringing in in strikebreakers from East Coast cities to cross picket lines, setting off mob violence in the streets of Omaha but eventually forcing the strikers to capitulate.

Tensions between streetcar workers and management simmered for 16 years before breaking out into violence again during 1935. A long and violent strike began during April of that year and management used the same tactics that had worked during 1909 --- strikebreakers were imported from eastern cities and streetcars were fortified against attacks.

The strike turned deadly in South Omaha on the evening of June 14, 1935, the third night of violence in the city's streets, after Police Capt. Robert Heller ordered some 100 officers armed with shotguns to "shoot if necessary" into crowds of citizens marching in sympathy with striking workers.

Two volleys of shots were fired, one at 32nd and K streets and the other a short time later at 24th and L streets, according to a report in The Chicago Tribune of Saturday, June 15.

Also on the evening of June 14, Dewey and Cleo McCoy, accompanied by another couple, decided to go for an automobile ride --- perhaps motivated by curiosity about the violence, or perhaps not. Whatever the case, according to The Chariton Herald-Patriot of June 20, they stopped near the intersection of Railroad Avenue and Gilmore Street to watch the violence.

Police gunfire into the crowds of strike sympathizers erupted as they pulled up, killing one man outright, John Duster, a milk wagon driver. Dewey, sitting in his vehicle, was struck in the head and chest by another blast.

In all, about 50 protesters and bystanders were hospitalized after the police assault, some 30 suffering from gunshot wounds and the balance having been clubbed. Dewey died of his wounds on Monday, June 17, at South Side General Hospital.

Funeral services were held on Tuesday afternoon in Omaha, then the remains were brought on Wednesday to Chariton for another service and burial in the Chariton Cemetery.

Omaha was placed under martial law as the result of the violence that had resulted in the deaths of Duster and McCoy, but violence did not subside. At the end of the month, 1,800 National Guard troops were brought in to force an end to the conflict. Although overt unrest subsided, the Omaha Traction Co. never unionized.

Dewey's grave on a southeasterly facing slope in the Chariton Cemetery seems to have been largely forgotten until the death during 1976 of his bachelor brother, Guylford. The McCoy family lot elsewhere in the cemetery was nearly full, so the decision was made to bury Guylford next to Dewey. It appears as if the small stone now marking Dewey's grave was erected at about the same time a somewhat larger stone was placed at the head of his brother's grave. 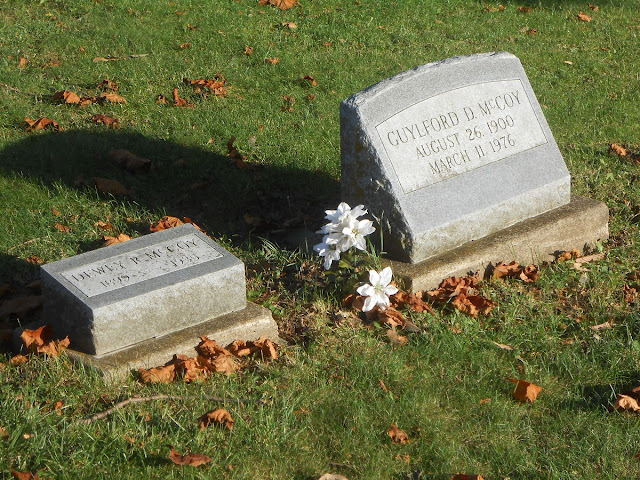 Thank you for this article. He was my great grandfather, and I heard many a time how he was unjustly killed.