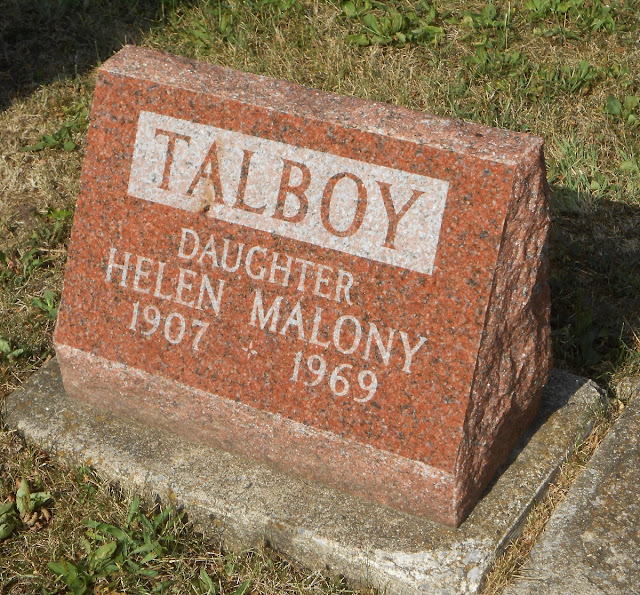 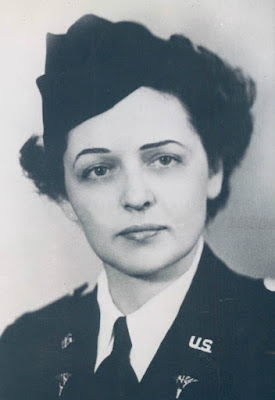 Helen Malony Talboy's tombstone in the Chariton Cemetery identifies her as "daughter" rather than as a World War II hero. And the flag holder that once was embedded in the ground at her grave has  been broken and the stalk, relocated nearby.

So she rests here now largely forgotten --- a hero among us. Her parents, John H. and Orpha Malony, and her sister, Ruth Malony Thomas, are nearby.

Alyse Hunter, who chairs the Chariton Historic Preservation Commission, intrigued by the rarity of the surname "Talboy," mentioned Helen yesterday during a commission meeting as we talked about the 2017 Chariton Cemetery Heritage Tour, scheduled for Sept. 24.

This year, we want to gather in front of the shelter house and introduce a few of the interesting folks reposing in that immediate neighborhood. Although none of us knew anything at all about Helen, the distinctive surname was interesting, Alyse suggested.

So I came home and did a quick survey. Here's a part of what I found.

Helen was born during 1907 and moved to Chariton as a child with her parents --- her father was a dentist. She graduated from Chariton High School during 1927, three years before the early death of her mother, the first to be buried on the family lot. Her father later remarried and relocated in Corydon.

During 1934, she graduated from the Mercy Hospital School of Nursing in Burlington, then married in 1935 a traveling salesman named Willis E. Talboy. That relationship did not endure, but Helen kept the surname for the remainder of her life.

When World War II broke out, Helen was working as a nurse in Des Moines. She enlisted during November of 1942 and was deployed overseas during April of 1943, assigned to the 95th Evacuation Hospital, attached at various times to both the 5th and 7th armies.

This was a 400-bed mobile hospital staffed with approximately 40 nurses, 40 doctors and more than 200 enlisted men. When the hospital landed in Italy on Sept. 9, 1943, it was the first U.S. hospital established in Europe during World War II. Another amphibious landing --- at Anzio --- followed.

Maj. Gen. Norman T. Kirk, surgeon general of the U.S. Army, provided this account of Helen's service before Anzio after the war while writing about her for The American Magazine:

"When Lt. Helen Talboy went overseas, her convoy was attacked again and again by submarines. In the blistering or muddy days of the Tunisian campaign, she sometimes served within six miles of the front.

"She landed with the infantry at a beach-head in Sicily, followed the battle to Palermo, and went on to Italy, only to have her ship bombed in Salerno bay.

"Wet and bedraggled, wearing nothing but pajamas and tennis shoes, she was finally set ashore. Next day she was at work again in the surgical tent of her evacuation hospital unit, supervising the care of men upon whom the enemy's shrapnel and bullets had done all but their worst. It was enough to try the strongest men.

"But weeks later, after all her hardships, Lt. Talboy was one of the first to volunteer to land with the infantry at Anzio, just south of Rome, a maneuver that proved to be one of the most perilous flanking movements our troops have undertaken in Italy. Everybody knows now the bitterness of that furiously contested fight at Anzio. None knows it better than that woman from Des Moines who again offered her life for her country there."


Associated Press correspondent Kenneth Dixon, the only U.S. civilian reporter at Anzio, picks up Helen's story in this dispatch from Anzio, dated Feb. 8, 1944. This story was published nationwide on Feb. 9, 1944, and in the days that followed:

"With Allied Invasion Forces South of Rome, Feb. 8 --- If the courage of American nurses ever is questioned, the story of Helen Talboy of Des Moines, Iowa, and her gang of spunky girls on the Anzio beachhead will supply the answer.

"One night a week ago a group of them left the nearby hospital tents for the correspondents building when falling flak shredded the tent roofs and shells screamed overhead.

"The tension was beginning to tell on them. Helen was one of the most jittery. But they all went back to their hospital tents and went on with their work.

"The newsmen sat around talking after they left, saying they had about reached the breaking point --- that this beachhead was no place for women.

"A couple of days later, Jack Foisie of Stars and Stripes and I were at the hospital hunting the chief surgeon to get a story. Helen, who was first lieutenant in charge of surgery, volunteered to find him.

"Instead for half an hour she wandered indecisively out in the middle of the hospital area, talking disconnectedly about fear and recent close calls. She was trying hard to rationalize her growing fear --- she was not ashamed of it; nobody is ashamed of fear over here; she merely was trying to keep it from getting control of her.

"As I left, I said, 'Jack, she's in bad shape. She has been through too much. She is about to go to pieces.'

" 'It looks like it,' he said. 'But she's trying hard. I wonder what she would do in a sudden crisis?'

"When German bombs hit the hospital, killing 27 and wounding more than 60 --- including three nurses killed and three wounded --- Helen was on duty in the surgical section, which was punctured by hundreds of shrapnel holes.

"Without a moment's hesitation she took charge. She collected the surviving nurses, gave them bandages and first aid equipment and started them caring for the wounded, lying crumpled and moaning over the bloody hospital area.

"She supervised the first aid, and saw to it that the dead were covered as quickly as possible, bringing some merciful semblance of order to the whole nightmarish scene.

"The same nurses who seemed so near breaking a week ago, were busy elsewhere. Late Monday night they were still working. Nurses from other units came up and volunteered to help, but these tired, stone-eyed veterans insisted on caring for their own.

"Nearby, I saw some men weeping, standing in small shaken groups. Some of the nurses were crying, too, but soundlessly --- the tears on their cheeks in the pale moonlight were the only sign.

"Eventually their grief would get the better  of them, for these dead and dying were not strangers but their comrades of many months. And their fears would return.

"But hundreds of soldiers who lay wounded in those tents never will forget how Helen Talboy and her gang of spunky girls discarded their fears, postponed their grief, and did their jobs when the chips were down."

I'll save the details of Helen's later life for September. Nothing else really needs to be written right now. But if you're walking in the cemetery on one of these hot July evenings and turn the corner in front of the shelter house to head east, look to your left after you've taken a few steps and give Capt. Helen Malony Talboy a salute.

Please contact the local Veterans's Affairs office to get her military marker replaced. If her descendent agree a flat bronze military marker could be added to her memorial to keep more of her service achievements alive.

wow, what a great story of a dedicated life of a nurse. thanks for sharing this

Another great untold story! Thanks for your good work, Frank.
Mark Threlkeld