Raising the flag to mark U.S. entry into World War I 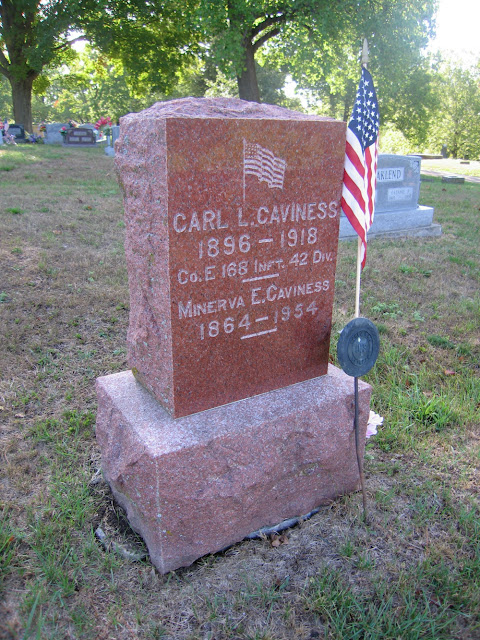 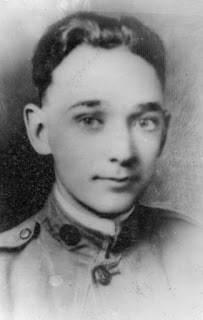 Lucas County will mark the centennial of U.S. entry into World War I during a ceremony beginning at 8 a.m. Thursday at Veterans Memorial Park in Chariton. A commemorative centennial flag will be raised on the Veterans Flag Pole at that time, followed by coffee at the post home of Carl L. Caviness Post No. 102, American Legion, just south of the park. All are welcome to attend.

The anniversary is of special significance to the Legion post because it was organized after the war ended on Nov. 11, 1918, by returning World War I veterans who named it in honor of Caviness (left), the first Lucas Countyan to die in combat during the war. Caviness was shot to death by a sniper in France on May 20, 1918. The post charter is dated July 17, 1919.

For Americans, the war began on April 6, 1917, when the United States declared war on Germany. A declaration of war against the Austro-Hungarian Empire followed during December. Europe, however, had been engulfed in war since 1914.

Of the 26 young Lucas County men who died while in service during World War I, eight were killed in combat or died of combat-related wounds; the remainder, of "Spanish flu," an epidemic that swept U.S. military units worldwide. Five died at Camp Dodge --- before leaving Iowa; six, at other military installations in the United States; seven, in France or en route.

Those who died in combat were buried hurriedly, some without benefit of formal rites, on battlefields near where they fell, but after the war, remains were recovered. Two of Lucas County's soldiers, Fred Culbertson and Oshea Strain, still are buried in France.

The remains of the remaining dozen were repatriated to Iowa and reburied in cemeteries in or near Lucas County, commencing with Pvt. William Pulley on 3 October 1920 in the Derby Cemetery and concluding with Pvt. Roy Tickel, buried in the Newbern Cemetery on 21 December 1921.

As a rule, Caviness Post Legionnaires met the returning remains of comrades at the C.B.&Q. depot, then escorted them to family homes or the Beardsley undertaking parlors on North Grand, where the high school stands now. A day or two later, Legionnaires gathered again to accord military honors during funeral services. Some of these services were open-air, held on the courthouse lawn in the presence of hundreds of mourners.

Here's a list of the 26 young men who died, compiled from a Legion record book now at the Lucas County Historical Society museum and other sources. The Legionnaires referred to these men as their "Gold Star Buddies."

PULLEY, Pvt. William Barnett, unit unknown, age 24; son of Frank D. and Anna E. (Musgrave) Pulley; born 3 August 1894 in Warren Township, near Derby; died 17 October 1918, Base Hospital 101, Brest, France, of pneumonia; remains repatriated and buried in the Derby Cemetery on 3 October 1920. Pvt. Pulley's remains were the first repatriated to Lucas County after the war's end. William B. Pulley Post No. 343, Derby, was named in his honor.

SANDAHL, Pvt. Rudolph Elwood, Co. F, 139th Infantry, age 27; son of Mandus L. and Carrie O. (Johnson) Sandahl; born 3 March 1891, Creston, Union County, Iowa; killed in combat Sept. 26-30, 1918, near Exermont, France, during the Battle of Argonne Forest (there were no surviving witnesses to his death, thus the date is imprecise); remains repatriated and buried in the Chariton Cemetery on 16 October 1921.

THOMAS, Pvt. Robert, Co. F, 349th Infantry, age 30; son of Charles and Georgia (Williams) Thomas, of Kansas (apparently estranged); born 11 February 1888 in Kansas; died of influenza 3 April 1918 at Camp Dodge; buried Chariton Cemetery (by Joseph S. and Etta Clark for whom he had been working as a farm hand).