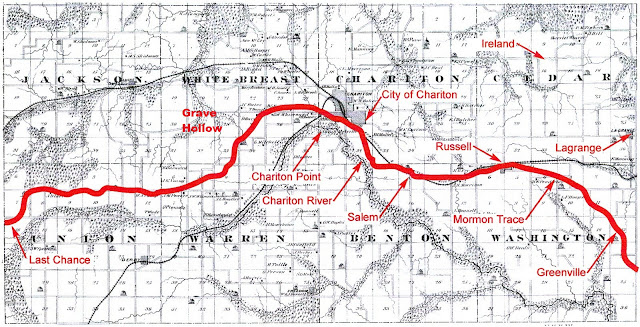 This is the first half of a two-part followup to a Lucas Countyan post entitled, "Whose grave is in Grave Hollow, you ask."  It provides more information about the Mormon Trail route through Lucas County (I've added that route in red to the 1875 Andreas Atlas map of the county, above) as well as about Sarah (Rigby) Gabbot, accidentally killed at Chariton on Oct. 30, 1846, and buried the next morning somewhere in a valley west-southwest of town called Grave Hollow.

It's necessary to back up a ways in order to understand why Sarah (Rigby) Gabbott, her husband, Edward, and their two children, Mary and Susanna, were at the future site of Chariton about noon on that Friday, Oct. 30, 1846, when she was crushed by an ox-drawn wagon, then died.

So let's go back to Nauvoo, Illinois, during the summer of 1844 when word reached the city of some 12,000 people --- comparable in size to Chicago --- that Mormon prophet and president, Joseph Smith Jr., and his brother, Hyrum, had been murdered by an anti-Mormon mob at the jail in nearby Carthage on June 27.

In the aftermath of that tragedy, tension increased although both Mormons and the Illinois establishment attempted to resolve issues peaceably. Anti-Mormon sentiment continued to run high and hot and it soon became evident that mob violence could not be contained.

In September of 1845, raiders burned about 100 homes and several farmsteads in the Nauvoo vicinity and Brigham Young, now presumptive Mormon leader, promised Illinois officials that the Latter-day Saints would leave Nauvoo and outlying settlements and farms and move west the following spring.

Over the winter of 1845-46, the Saints began to plan for the orderly exodus of some 15,000-17,000 people. Money, maps and supplies were gathered, sturdy wagons built, people were grouped into companies and routes westward explored. Work also continued on the Mormon Temple, which the Saints hoped to leave behind complete.

During early 1846, rumors of an impending raid prompted Young to evacuate the families of key church leaders into Iowa, hoping that their departure would avert further attacks on Nauvoo by demonstrating that the Saints planned to keep their promises. The first Mormon wagons were ferried across the Mississippi on Feb. 4, 1846, and a camp established at Sugar Creek. Soon thereafter, the river froze and more wagons crossed on the ice. By late February, the forward company in Iowa, the "Camp of Israel," had grown to approximately 2,500 people.

On Sunday, March 1, 1846, the Camp of Israel began to roll westward in a train of some 500 wagons. This first party, with Brigham Young as its leader, blazed what is known today as the Mormon Pioneer Trail. That trail led from Montrose to a Des Moines River crossing at Bonaparte, then northwesterly across Van Buren and Davis counties to Drakesville. Near Drakesville, the Pioneer Trail turned southwest to a Chariton River crossing southeast of the current site of Centerville, then passed across southern Appanoose County near the Missouri border and angled northwest through southern Wayne County to Garden Grove in Decatur County.

One reason generally cited for selection of this rough and troublesome route was the fact that northern Missouri was already settled and supplies for people and grain and hay for livestock could be purchased there.

Meanwhile, as the grass began to grow and nature provided adequate forage for livestock, a majority of the Saints in Nauvoo began to cross the river in orderly fashion and move west. Some 10,000 Saints were involved in this second phase of the journey which, for the most part, passed through Lucas County.

The Brigham Young party reached Garden Grove via the Pioneer Trail on April 24, 1846, and two days thereafter began to build what would become the first semi-permanent way station along the trail west. At the same time, Young sent scouts back to eastern Iowa to meet the companies of refugees that were following. The  Pioneer Trail had proved to be very rough and difficult to navigate. Instead, Young instructed, use thereafter the northerly route that followed the great ridge in Lucas County that divides the Missouri and Mississippi river drainages.

Commencing in early May, thousands of Saints began to follow the new route, traveling west from the current site of Drakesville to Unionville (Soap Creek), then northwesterly to Moravia, almost due west through what now is Inconium (Dodge's Point), then making a great arc through Lucas County north of the Chariton River with its apex at Chariton Point and passing directly through the current site of Chariton. The Saints exited Lucas County southwest of Last Chance and, at Smyrna in Clarke County, could continue west to Mt. Pisgah, established in May of 1846, or turn south to Garden Grove.

By the time the Gabbotts and 150 other members of the Orville M. Allen Relief Company reached Chariton Point late that fall, the trail was well established and already had been followed by hundreds of wagons, thousands of refugees and countless head of livestock.


Both Sarah and Edward Gabbott were natives of an industrial region in northwest England. Their hometown was Leyland, Lancashire, today a small city that forms the northern point of a triangle with Liverpool to the southwest and Manchester to the southeast.

Significantly, Leyland is just south of Preston, where the first seven LDS missionaries to reach England established the first English LDS congregation during late July and early August, 1837. Today, Preston is the oldest continually existing LDS congregation in the world.

More than a year after the LDS congregation had been organized in Preston, the Gabbotts were converted, and on Nov. 11, 1838, were baptized by Heber C. Kimball in the chilly waters of the River Bibble near Preston. Other early converts included Sarah's parents, Edward and Susannah Rigby, and several of her siblings.

The first children of Sarah and Edward were sons, William and Edward, both of whom died young during May of 1837. Daughter Mary was born during April of 1838 and Susanna, during 1840.

During the early winter of 1840-41, the Gabbots and their children as well as the Rigby family began to prepare to leave England and join their fellow Saints at Nauvoo. They were among 235 converts who sailed aboard the ship Sheffield from Liverpool on Feb. 7, 1841, and arrived at New Orleans on March 28.

From New Orleans, the Saints traveled upriver to St. Louis, commencing April 1, aboard the steamship Moravian. At St. Louis, the party transferred to the steamer Goddess of Liberty and, at Warsaw, Illinois, to the smaller and more maneuverable Aster, arriving at the docks in Nauvoo on April 18, 1841.

Upon arrival in Nauvoo, Edward and Sarah, as well as the Rigbys, were given land (the Gabbotts received an acre) and such assistance as could be provided in building homes for themselves, then set about building new lives for themselves in a new land.

Edward farmed, worked at times as a carpenter and, along with most men in Nauvoo, joined the workforce then building the Nauvoo Temple. Sadly, the two daughters who had accompanied them from England died and were buried in the Nauvoo cemetery. But two additional children were born, John, on Oct. 4, 1842, and Sarah Ann on Feb. 28, 1845.

As the situation in Nauvoo deteriorated during 1845, the Gabbotts began to prepare with nearly everyone else then living in the city to cross the river and move farther west, but they were not affluent people and isn't clear when they left Nauvoo. Their presence in Nauvoo was recorded for the final time when they received their endowments in the still incomplete Temple on Feb. 7, 1846.

By August of 1846, an estimated 700 Mormons remained in Nauvoo and outlying settlements. It seems likely that the Gabbotts were among them. Most were too poor, too sick or too infirm to travel. During September, those who remained were simply driven out by anti-Mormon raiders. Some found refuge on the Illinois side of the river; others fled across the Mississippi to camps in the vicinity of Montrose.

Thomas Bullock, who would record Sarah Gabbott's death at Chariton in his journal as October ended, was among the last few hundred Saints in Nauvoo during August and September, 1846. He, his wife and four children all were too sick with "the ague and fever" to travel, even though two wagons to transport the extended Bullock family had been acquired.

According to a letter he wrote two years later, some 2,000 anti-Mormon forces marched into Nauvoo on Sept. 17 intent on forcing all of the remaining Saints out. Bullock and his family finally were able to cross the river with their wagons on Sunday, Sept. 20, and went into camp with more than 100 other "poor Saints," some equipped with wagons, others sheltered by tents, where they remained for some 17 days.

It seems likely, although can't be proved, that Edward and Sarah Gabbott and their children also were forced across the river from Nauvoo during this time and were camped with, or near, the Bullocks.

As the final Saints were being driven from Nauvoo, Brigham Young --- then in western Iowa --- was arranging for relief companies to return to the banks of the Mississippi with teams and wagons and bring the poor Saints stranded there west.

Orville M. Allen, captain of the first relief company, arrived in the "poor camps" on October 7 and began to organize the Bullocks, the Gabbotts and others for the trek west.

Note: My principal source for biographical information about the Gabbotts has been Sandra Gibson Bryson's brief family history narrative that is available here in full at FamilySearch.