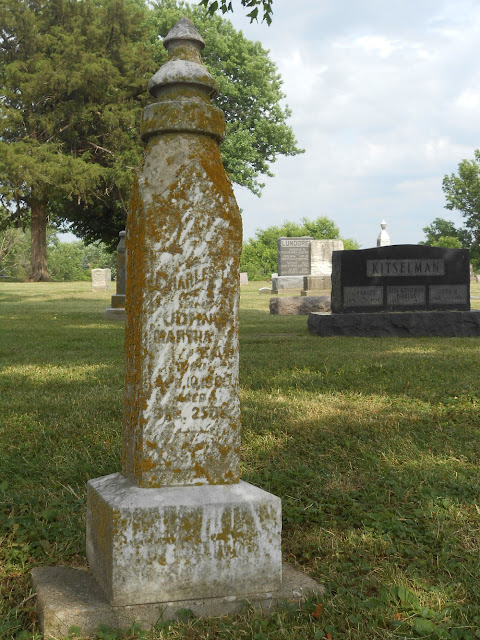 I can show you where in the Chariton Cemetery John Kay is buried --- an unmarked grave incorporated into the root system of a fine maple tree just north of the tombstone of his infant son, Charles (above).

But I know far less than I'd like about the man himself, a complication that arises partly from the difficulties of tracking down the fractured family histories of men and women born into slavery and partly from the fact that the children and grandchildren of Lucas County's black first settlers generally moved elsewhere in search of opportunity.

But some of John's story is told in a brief obituary, published on the front page of The Chariton Patriot of Oct. 18, 1906:

John Kay died at his home in Albia, Saturday, October 13, 1906, of heart trouble, aged 60 years, 6 months and 24 days. the body was brought to Chariton Monday, and was buried in the Chariton cemetery. Funeral services were held in the A.M.E. Church Monday morning at ten o'clock, conducted by Rev. J.H. Bell, of Albia, assisted by Rev. Press Ervin and Rev. Wright, of Chariton.

Mr. Kay was born in Jackson, Mississippi, March 20, 1845. June 7, 1880, he was married to Miss Martha Jane Jeffers. They were the parents of three sons (actually four; Charles died young). Mr. Kay united with the A.M.E. Church in Chariton in 1888. Mr. Kay and family resided in this city for many years and were respected by the community. He was an honest upright colored man and to the widow and sons, the Chariton friends extend their sympathy. Those who accompanied the remains were were Mrs. John Kay and son, David, Mrs. Bennings, E.F. Butler, of Albia, and Andrew Jeffers, of Buxton.

The Leader, in its edition of Oct. 18, carried a similar front-page obituary, but added these details: "His has been a typical life of many of his race. He was born into slavery and served his country in arms during the struggle for emancipation and it is related of him that he was a servant of Gen. McPherson and when that distinguished warrior fell he was caught in the arms of his loyal friend."

The death of Maj. Gen. James Birdseye McPherson, second highest ranking Union officer killed during the Civil War, is a relatively familiar story. Given command of the Army of Tennessee on March 12, 1864, after former commander Maj. Gen. William Tecumseh Sherman had been appointed to command all armies in the West, he rode into a line of Confederate skirmishers early in the one-day Battle of Atlanta, July 22, 1864, and was shot dead while trying to escape.

Unfortunately, I've been unable to turn up any sort of confirmation that a servant or orderly was present when the general died. And while a John Kay did serve in Co. D, 101st Regiment of U.S. Colored Infantry, organized in Tennessee during September of 1864, there is no way to prove that this was our John.

It wasn't until 16 years later --- when John was 36 --- that his name first appears in a public record that can be tied with some assurance to the John Kay who a few years later would move to Chariton.

When the 1880 federal census of Knoxville, Marion County, was taken, John Kay, age 36, was boarding in the home of Henry Mason, 38, a barber; Della, his wife, age 28, a washerwoman; and their children, Hattie, Creola (a son) and Estella. John's occupation was given as day laborer; his birthplace, Mississippi; and the birthplaces of his parents, Alabama (mother) and Georgia (father).

Also living in the Mason home was Lizzie Jeffers, a servant, age 23. Everyone in the household was identified by the census-taker as mulatto.

Lizzie, or Elizabeth, probably was the elder sister of Martha Jeffers, whom John Kay would marry the following year (the date of marriage given in his obituary is inaccurate). Most likely she had moved to Knoxville from her family's Indiana Township farm home to find employment.

Burrel, Anderson and Crudeup Jeffers, North Carolina natives whose precise degree of relationship just isn't known, and their wives and children, were Marion County's black first family --- arriving to settle in newly opened territory from Indiana during 1848. Their farm homes were in Indiana Township, two miles south of Attica, in the immediate vicinity of Indiana Chapel Methodist Church and cemetery, which they attended and where they are buried.

A year later, on May 8, 1881, John Kay, age now given as 38 but still a day laborer and a resident of Knoxville, and Martha J. Jeffers, age 19, were married at the Indiana Township home of her parents, Crudeup and Mary Elizabeth "Polly" Jeffers, by the Rev. C.H. Montgomery.

John gave his father's name as David Kay when applying for a marriage license in Knoxville.

Very soon thereafter, it would appear, John and Martha moved to Chariton. I'll have more to say about the Jeffers family and John Kay's career in Lucas County another time.