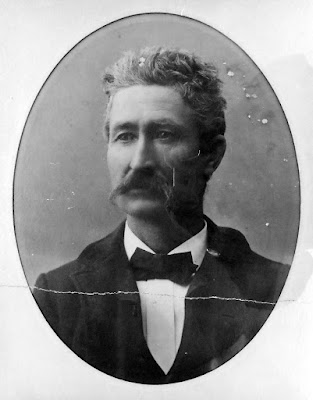 The State Historical Company's 1881 history of Lucas County remains the go-to source of information for anyone interested in investigating the lore, legends --- and facts --- of Lucas County's earliest days.

That's due in large part to Dan Baker, who edited the local history section and, indeed, researched and wrote much of it himself.

This was only 30 years after the county's founding and many thought that not enough history had occurred yet to fill a book. And the asking pre-order price, $8.50, was --- well, just outrageous. That, in those days, was a small fortune (Lucas County's public lands had sold  for $1.25 per acre 30 years earlier). 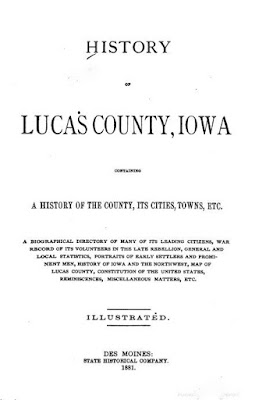 Dan had been editor of The Chariton Leader since 1872 --- the year it arose from the ashes of The Democrat, founded, edited and published by the fiery John V. Faith --- when representatives of the Des Moines-based State Historical Company, founded the previous year, rolled into town during early spring.

During April, Baker sold his interest in The Leader to N.B. "Bone" Branner, a fellow attorney and long-time friend and associate, and signed on with the State Historical Company as editor in chief of the new history.

That firm had a plan --- to produce as many histories of Iowa's various counties in as short a time as possible. In general, the histories looked alike so far as format and binding were concerned. The first 320 pages in all these histories were identical --- an overview of regional, territorial and early state history as well as geography, flora, fauna and the like. With this general material set into type, the company then went looking for qualified editors, writers and local historians in each of the counties where a history was planned. In Chariton, it found Dan.

As editor and principal writer, Baker filled the remaining 422 pages. Although dated 1881, the book was printed and distributed during 1882. Granted, $8.50 seemed a steep price at the time, but go looking for a copy in good condition today and expect to pay several hundred dollars if you're lucky enough to find one.

During late March, 1881, just before he turned The Leader keys over to Bone Branner, Dan engaged in a little reverse psychology in his news columns to promote the proposed history book. This is vintage Baker, but the unwary reading it today might be a little confused.

In his persona as "Old Settler," Baker summarized everything negative that had been said about the proposed history. Then, in typical Baker fashion, he agreed. Here's how it read:

HE WANTS TO KNOW

Editor Leader: Is not the local paper in some sort the instructor of its readers and patrons? Is it not you duty to enlighten your subscribers on all matters of local interest, particular? Will you be kind enough to answer the following few questions?

A set of men whom I believe to be too lazy to work, afraid to steal and ashamed to beg, are going around over the country pretending to prepare what they call a history of Lucas county, to be sold to the gudgeons at the price of $8.50.

1st. Is anything known as to the character and responsibility of these peripatetic literary lice of Egypt?

2nd. Has not the same thing been attempted in other counties? If so, what do the people of those counties and your exchanges have to say about the matter, and about the satisfaction given.

3rd. Is it in your opinion a humbug and a fraud, or not?

4th. Is it possible to write a history of Lucas county worth $8.50? Are there enough incidents in the history of the county to make a book worth over fifty cents?

5th. Is there any, even the slightest guarantee, of the authenticity of the matters it is pretended will be related in this catch-penny of a so-called history?

6th. Are there any facts in Lucas county's history, outside of the public records of the Court House, worth putting in a book?

7th. What ought to be the fair selling price for a history of Lucas county?

8th. Is it true that these fellows have a lot of anecdotes stereotyped, with blank spaces for names and dates, and that they relate the same anecdote of Mr. A in Clarke county, of Mr. B. in Decatur county, and Mr. C in Monroe county?

Mr. Editor: Please answer these questions through your valuable columns, and confer a benefit mayhap on your many readers, and please be full and explicit.

"Old Settler" sends us the above pointed interrogations, concerning the proposed Lucas county history, which some strangers in the city claim they are getting up. As we believe the enterprise an unmitigated, unscrupulous fraud upon its face, we therefore answered the questions asked according to our honest opinion.

1st. We neither know anything, and have never heard anything before of the men or company who are getting up this magnificent $8.50 book.

2nd. The same thing has been attempted, and so far as our exchanges have spoken of they are gross frauds and swindles.

4th. No. There is no county or State history, or history of any city, province, kingdom, monarchy, age, period, era or event on earth worth $8.50, though fifty cents per volume would not be enough to pay for a well written history of anything, unless the sale was large.

6th. Very few, except those of a personal character, and some reminiscences of old times.

7th. From one to two dollars, according to style of book &c.

8th. We understand that such is a trick of the trade in getting up books of that kind, but we know nothing about it ourself.

During 1883, two years after finishing his work on the history book, Dan packed up his family and headed for California, where he became moderately famous as a crusading newspaper editor in Santa Ana. You can read more about him in earlier posts: "Pardon me, but I'm reading ..." and "Daniel M. Baker: More of the story."