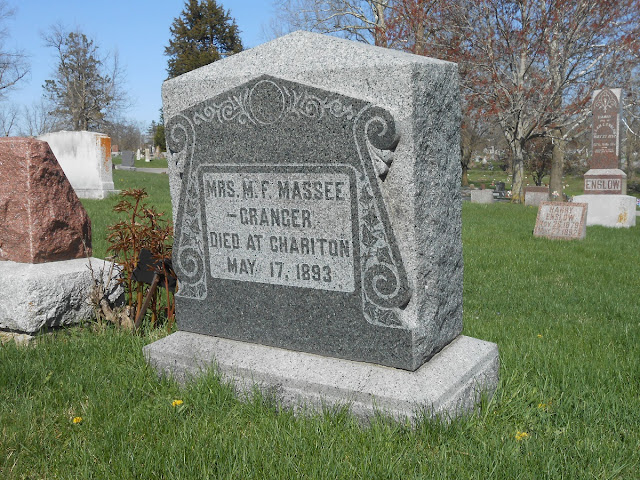 This fine tombstone upstream from the Copeland Mausoleum caught my eye the other day and I got to wondering just who Mrs. M.F. Massee-Granger was --- she who has the distinction of being one of the few Chariton Cemetery residents buried under a hyphenated surname.

The inscription suggests that she was born a Massee and married a Granger, but neglects to mention that her given name was Margaret Frances. Nor does the big stone inform us that her somewhat improvident, but lovable, husband, Frank Granger, is buried by her side and as a result of the omission, now is proceeding through eternity anonymously.

A little research turns up the facts that Margaret Frances, who seems to have preferred her middle name to her first, was born about 1830 in Oneida County, New York, to William and Mary Catherine (Gypson) Massee, and came with her family to Dunn County, Wisconsin, as a young woman. She married Frank Granger, some five years her junior, in Wisconsin on Nov. 15, 1863, and they moved southwest to Chariton during 1867.

It may be unfair to suggest that M. Frances was the adult in this family, but she certainly seems to have been the better manager, although Frank actually excelled at much of what he did during life and everyone seems to have liked him.

In Chariton, the Grangers acquired a small farm on the edge of town that allowed Frank an outlet for his passions for agriculture and gardening (he was a consistent member and often secretary of the Lucas County Agricultural Society). But he earned a living initially as a clerk in various stores.

He also engaged in some moderately disastrous business ventures. During the 1870s, he launched himself as a dealer in grain and livestock, but ended deep in debt --- including a mortgage on the farm. M. Frances's sister, Hannah (Massee) Reynolds, bailed her brother-in-law out, buying his notes and the mortgage.

When Hannah died while living with the Grangers in Chariton during 1881, she left the farm to M. Frances, who thereafter was mistress of her own financial destiny.

Frank also operated market gardens at various times and, during the 1880s, launched a corn- and tomato-canning enterprise. That didn't work out either.

He was, however, a highly efficient Chariton city clerk and bill collector and when the city went into the electrical generating business took on the additional titles of city electrician, line builder and line repairer, jobs he seems to have performed to everyone's satisfaction.

M. Frances became a pillar of First Methodist Church and Frank, a very active member of Chariton's I.O.O.F. lodge. A well-educated man, he also served on the Chariton School Board.

M. Frances died unexpectedly of a massive stroke on May 17, 1893, age about 62, leaving Frank somewhat at loose ends. He apparently erected this fine stone to mark her grave and had enough money to live on, but the fact he was not mentioned in his wife's will complicated life a little, although he was able to claim a "dower" right in her estate. Her principal heir was her sister, Jane French.

Fortunately for Frank, he had a younger cousin, Ida Morey Riley, with whom he was on good terms. During 1890, Ida and her partner, Mary Ann Blood, who met while teaching at what now is Iowa State University, founded in Chicago the Columbia School of Oratory (now Columbia College), an institution that had turned out to be a considerable success.

After the death of M. Frances, Frank took to spending more and more time in Chicago with Ida and Mary, where employment as a general handyman always was available at the college. Eventually, he moved permanently to Chicago, selling out his home in Chariton.

Ida died too young during 1901 in Chicago, but Miss Blood seems to have been fond of Frank, too, and so he remained a resident of her home and employed by the college, which she now headed, under her protective wing.

During October of 1922, when he was 86, Frank was struck by a car while walking on Michigan Avenue in Chicago, sustaining a broken hip. That resulted in hospitalization for five weeks and then death on November 24.

Mary Blood arranged for his remains to be brought to Chariton and for funeral services to be conducted at the Methodist Church under the auspices of the I.O.O.F. Miss Newman, the Columbia College secretary, accompaned the body to Chariton and represented Miss Blood and the college during last rites.

Frank then was buried by the side of M. Frances in the Chariton Cemetery, but no stone was erected nor was an inscription placed on her monument to indicate that his grave is there, too.