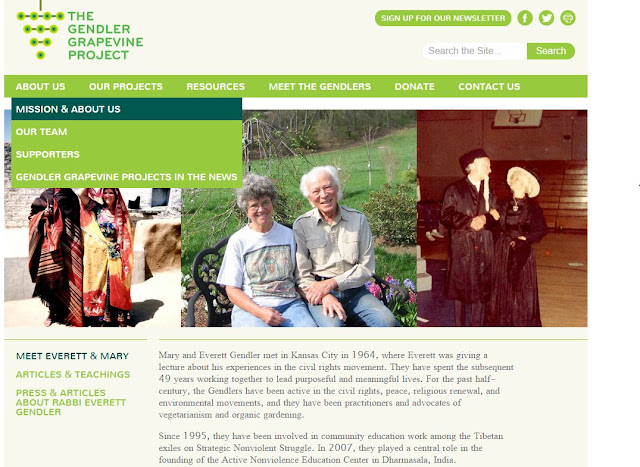 This is the second of two posts about Rabbi Everett Gendler, born in Chariton during 1928, and his family, parents Max and Sara and sister, Annette, and others. The Max Gendler family lived in Chariton until 1939, when they moved to Des Moines. Their principal business was Gendler grocery, located on the southeast corner of the square in the building that now houses Chariton Floral.

When the last post ended, in 1936, Max Gendler had sold his Chariton grocery operation to two gentlemen from Lamoni, Charles Hyde and David Vredenburg. The store reopened as the Chariton Supply Store and prospered.

Hyde & Vredenburg incorporated during 1938, with 15 stores and headquarters in Lamoni, In 1945, company headquarters were moved to Chariton when the Chariton Wholesale Co. was purchased. And in 1952, all of those "Supply Stores" became Hy-Vee. Hy-Vee, today, operates 240 supermarkets across the upper Midwest. Although headquarters now are located in West Des Moines, it remains Lucas County's largest employer.

Max Gendler, meanwhile, turned his attention full time to his dairy operation. In 1936, he offered the only pasteurized milk available commercially in Chariton --- up to half the milk sold in the United States at the time and until after World War II was "raw." He may have been ahead of his time, since the pasteurized product was slightly more expensive. Whatever the cause, he closed out the dairy operation during 1937.

His next enterprise was a used car dealership, located at the intersection of North Grand and Roland. Then he went to work as a salesman for the A.D. Busick Quarry at Osceola, then for Concrete Material and Construction Co., Des Moines. Principal offerings were agricultural lime and crushed limestone.

During 1939, the Gendlers moved from Chariton to Des Moines.

Everett Gendler, who had begun his education as "Gene" Gendler at Garfield Elementary, went on to graduate from Des Moines Roosevelt High School in 1946 and earn a B.A. degree from the University of Chicago before enrolling at the Jewish Theological Seminary of America in New York City, where he was ordained a Conservative rabbi upon graduation during June of 1957. He met and married Mary Loeb during 1964 and they have two daughters.

I'm not even going to attempt to write about Rabbi Gendler's career --- much has been written about his philisophy, interests and achievements and that information is available to anyone who cares to look. One place to begin is the Web Site of "The Gendler Grapevine Project"  or his Wikipedia entry, which is located here.

Rabbi Gendler's first pastoral assignment was in Mexico City and he served other Latin American congregations before becoming rabbi of the Jewish Center in Princeton, N.J. In 1971, he became rabbi at Temple Emanuel of the Merrimack Valley in Lowell, Massachusetts, and in 1977 was appointed the first Jewish chaplain of Phillips Academy in Andover. He retained both those positions until retirement in 1995.

Rabbi Gendler has had and continues to have an amazing career, deeply involved in causes ranging from pacifism through civil rights and justice issues to organic gardening, the latter inspired by pioneering activists and simple living advocates Scott and Helen Nearing.

He also is, more than likely, the only Lucas County native to have had more than a passing acquaintance with both Dr. Martin Luther King Jr. and the Dalai Lama.

Two other members of the extended Gendler family, their spouses and children were Chariton residents during the 1920s and 1930s.

Max Gendler's younger brother, Morris, whose interests were primarily automotive, moved to Chariton from Albia at about the same time his brother did. He sold used cars, then new cars, and built a new garage just across Grand Street west of the post office. He moved to Ottumwa during 1935 and remained in business there for the remainder of his life.

Max's sister, Dorothy, married Aaron Lewis --- and they were in the automotive business in Chariton, too, during the late 1930s. Sadly, Aaron Lewis, then operating the Chevrolet garage, took his own life in Chariton during August of 1940 and his wife and two young children moved elsewhere a couple of years later.

After moving to Des Moines, Max Gendler founded the Gendler Stone Products Co., which he operated very successfully from a capital-city base until his death at age 68 after a short illness during July of 1962, an honored member of both Tifareth Israel (Conservative) and Beth El Jacob (Orthodox) synagogues. Sara Gendler died in Des Moines during 1980.

Annette Gendler, also a Chariton native, married Dr. Stanley L. Isaacson, then teaching at Iowa State University, during 1952 and they eventually established their home in Des Moines where, in addition to serving as an associate professor at ISU he took over the presidency of Gendler Stone Products after his father-in-law's death. He became a leader of the Des Moines Jewish community, serving as president of Tifereth Israel and contributing to many other causes, Jewish and otherwise, providing an "ethical compass" for his community, according to The Des Moines Register obituary published upon his death at age 79 during September of 2006 in Sarasota, Florida.

Death in the Mines