Little Church on the Prairie: May Baptist 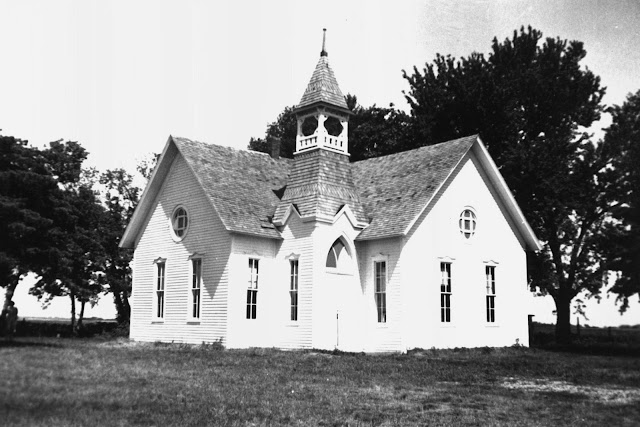 By Easter Sunday, 1969, the congregation of May Community Church had diminished to a handful and the decision had been made to discontinue services, so worship that day was a bittersweet occasion. And soon thereafter, the contents of the building were dispersed and one of Lucas County's loveliest rural houses of worship was taken down.

There really was little choice in the matter. Seventy-nine years earlier, when Charity Powers had set aside an acre of her farm at May crossroads for the church, a covenant in the deed had insured that when the site was no longer used for worship, ownership of the land would revert to the farm.

Built and furnished for $1,225 during the latter months of 1890, using plans that had cost $6 to procure, May Church was to my eye an ideal expression of the aspirations of the men and women who built it. On the one hand it was plain and practical, but beautifully balanced. On the other, there were flourishes --- that delightful little bell tower, a front door topped by a gothic arch and generous circular windows in the gable ends.

This post is part of a series --- reprinting a five-part memoir by William DeForrest Gay of his childhood years near May crossroads in the 1870s that was published in The Herald-Patriot during 1936. This church was not a part of Bill Gay's childhood. He had grown up, married and moved west by 1890 and his parents, Thomas and Lotilla Ann Gay, who were Methodist, were preparing to retire and move into Chariton when the congregation was formed.

But it was, along with May School and the Champlin store, at the heart of the crossroads community, formed by residents of the neighborhood --- some of whom were members of Lucas County's oldest Baptist church, Goshen --- with assistance from the then-pastor of Chariton's First Baptist Church, Eli Packer.

Here's the invitation to dedication of the brand new church, published in The Chariton Herald of Dec. 18, 1890: "Dedication services at May Baptist church in Warren Township, 9 miles southwest of Chariton, on Sunday, Dec. 28, 1890, at 10:30 a.m. Sermon by Rev. F. N. Eldredge, state missionary. Everybody is invited. Rev. E. Packer, pastor."

And here's a brief history of the congregation, read during a homecoming celebration at the church during October of 1938, then published in The Herald-Patriot of Oct. 13:

The following history of May church in Warren township was read by Charles L. Young during a homecoming observance at the church Sunday.

The oldest records of May church have been lost, possibly burned in the home of Mr. Leander Moore, one of the first church clerks. But a few of us were living here now exactly where we did when May church was organized in March, 1890, by the Rev. Eli Packer, who was then pastor of the Chariton  Baptist church. He drove out over the ungraded roads in a two-wheeled cart. Well, it seemed evident that folks were eager to gather together to study God's word. Seats (in the May school house) were crammed and sometimes there was not sufficient room to stand.

Mr. Curtis would gather his family into a high wheeled wagon, stopping for his neighbors' families where he had to pass by, and sometimes during spring thaws the team had a real load to pull before they reached their destination.

So the men got busy planning a larger house in which to meet. Mrs. Charity Powers owned land lying west of the school house, and she generously donated the plot of ground to build this building we are gathered in here today. Whenever we cease to use it for such purpose the land reverts back as part of that farm. We hope it never will. But those were happy times such as the poet wrote of the village blacksmith:

"Toiling, rejoicing, sorrowing, onward through life he goes. Each morning sees some task begin. Each evening sees its close."

And so on December 28, 1890, this May church was dedicated by the Rev. Mr. Eldredge, free from debt, and we were proud of our organ and equipment! (Note, according to papers in the Lucas County Historical Society collection, total cost of the church, organ, stove, chairs and all other contents was $1,225. There were, however, a few outstanding debts).

The Rev. Mr. Packer served two years as first pastor, then P.C. Nelson, yet a student, was ordained to serve two years as pastor. He also taught the May school for a term. The Rev. F. Edwards, of Osceola, became the next pastor and we all remember how he had to stoop as he walked around in some of our homes where our ceilings were not quite high enough to accommodate his height of six feet and seven inches.

The Rev. Mr. Carey came next, serving only a short time, being followed by the Rev. S.P. Shaw in 1899. He was a student most of the two or three years of his pastorate, but we remember several additions to the membership during the time. Then J. Shaw served a short period of time, being followed by the Rev. M. S. Clark for about two years. The Rev. Mr. Dilly of Humeston succeeded him for a short time, after which the Rev. Mr. Clark returned in 1908. He loved to sing and lead others in songs of praise.

The Rev. Bruce Wimmer was next and was ordained Aug. 2, 1912, at this church, delegates begin present from Eden, Unity, Chariton, Russell and Goshen churches. Next came the Rev. M.J. Sigler as pastor, located in Derby, serving two years. Then the Rev. Mr. Petit of the Chariton Baptist church served on Sunday afternoons for a time, engaging in a series of meetings which again resulted in several new members.

In June, 1936, Violet and Ruby Heifner also conducted a stirring revival. Our present pastor, the Rev. Archie Beals of Russell, began serving on Sept. 3, 1936, every other Sunday evening, and has been a great help in strengthening the church.

During the past year three have become members by letters and one, Mrs. Joanna Taylor, has been removed by death.

As we pass on, may others come
To do His will till the victory is won.

One of the May congregation's first acts was to seek and gain admission to the Eden Baptist Association, founded during 1852 and incorporating all but a few Baptist churches in far south central Iowa in those days before Iowa Baptists fractured and headed off in a dozen different directions. The association included a dozen or more Lucas and Wayne county congregations as well as, at varying time, congregations in Monroe, Appanoose, Decatur, Clarke and even Union counties. The Eden Association in turn was an affiliate of the Iowa Baptist State Convention. Large annual Eden Association sessions and smaller specialized gatherings were a part of church life for active Baptists during those early years, moving from host congregation to host congregation, including May, Goshen, Chariton, Russell, Bethlehem, New Providence (at Confidence) and many others.

The Rev. Mr. Beals would go on to serve May Church for 25 years --- until he could no longer make his way to the church to conduct services. Under his pastorate, the congregation reshaped itself as a "community" church in order to make it clear that one did not have to be Baptist to attend.

And even though preaching services were not necessarily held every Sunday during those years of horse- and foot-powered transportation and part-time preachers, May Church opened its doors on Sunday mornings for Sunday school nearly every week.

Here's a final bit of May Baptist history, giving an idea of how the church was built and published in The Chariton Herald of Dec. 25, 1890, under the headline, "Practical Christianity":

The May Baptist church in Warren Township, that was completed last September, was built by parceling out the work among certain of the membership on contracts, each one doing his particular part for a stipulated sum. Among the rest, Mr. W.L. Miller took a certain portion of the work for which he was to have $100, of which he was to donate $20. It was afterwards found that his contract comprehended much more work than was at first thought, and besides, his work was greatly interfered with and delayed by having to depend upon the work of others, so that he was a heavy loser by his contract, which he fulfilled without a murmur, though at a sacrifice that he could not afford.

The membership of the church and interested neighbors and friends, knowing the facts and having talked the matter over among themselves, concluded to right this matter. Accordingly, on last Thursday, Dec. 18, about 66 adults besides a number of children accompanied by Rev. Packer, of Chariton, the pastor, loaded themselves with well filled baskets of provisions, not forgetting to take along their pocket books and plenty of good cheer, proceeded to the home of Mr. Miller, took possession, and spread a grand feast of good things, which, with his good family, they all enjoyed.

After dinner a game of ball was proposed in which both old and young engaged with zest, not excepting the sedate and dignified pastor, and the occasion was one of unalloyed enjoyment. Before taking their departure, the unbidden guests presented Mr. Miller with a purse of $52 in cash as a token of their appreciation of his sacrifice for the church and as a reimbursement of his loss on the contract. A better illustration of practical christianity than this has not come to our notice in recent years, and we feel confident that it has not escaped the notice of the Recording Angel above.

Charity Hopkins Powers, wife of James Powers was my Great, Great Grandmother. Their daughter Flora, married William Fulton, and this land was passed on to them.
I find all this so interesting as this is also my family history and while I know much of this, some is new to me. Thank you for the history of May Church.

I am not sure if my first comment made it in, so I will write it again.
I am diving into my ancestry that lived in Lucas County. Some things I have read spoke of the family attending May Baptist Church. So I decided to google this little church.
There it was on this website. My 4th great grandfather was Lot Curtis. I see in this article that a Mr. Curtis is mentioned. I am so curious if that was my relation. From what I have read, it sounds like him for he had the character of a great gentleman. Thank you so much for putting this article online. You have made me very happy!