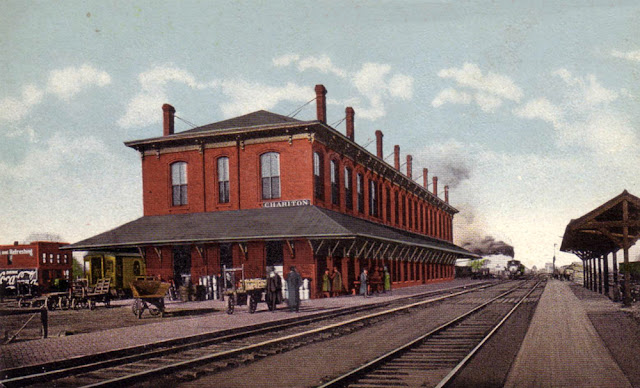 Prostitutes and  politicians have a good deal in common, although practitioners of the former trade at least are honest about which of their services a dollar will buy. Both, too, back in the good old days, made the occasional whistle stop --- including at Chariton.

The editor of The Fairfield Industrial Era made note of this back in 1875, reporting in his edition of August 25: "While waiting for the train at Chariton (at the C.B.&Q. Depot, above), the other night, we noticed a bevy of eight or ten brazen-faced, cheeky young women, promenading around there, whose actions indicated that Chariton was not deficient in that material necessary to demonstrate Webster's definition of 'Courtesan.' "

In fairness to the then-editor of The Leader, Dan Baker, he had noted the issue and reported upon the situation briefly in his edition of August 21: "We learn that several young ladies hailing from Des Moines  have opened a fancy boarding house somewhere in the northern part of the city. Young men preferred as guests, and lodging furnished if necessary. Keeping boarding house must be a dull business in Des Moines."

Baker reprinted his brother editor's dispatch from the Chariton depot in his Leader of Sept. 4, able now to report resolution of the situation:

"The gay and festive sirens who operated the boarding house that we mentioned a week or two ago, for the exclusive benefit of the young men, finally came to grief. While in the midst of unparalleled prosperity, with throngs of applicants for board who had to be turned away for the want of room, many of them being married men, whose fare at home was unsatisfactory, the Marshal made a descent upon their little suburban residence and invited them to a surprise party or official soiree at the Mayor's office.

"The young maidens gay, accepted the invitation and went.

"The Mayor kindly informed them that he was pained to hear that they were creating a monopoly in the boarding and lodging business which was contrary to the ordinances.

"That many of the ambitious young men of the city were inclined to while away their precious time that should be spent in some useful occupation, basking in the sunshine of their presence to the great alarm of anxious mammas and doting papas, and that he would have to impose a fine of $5 each upon general principles. They paid it and were discharged.

"The next day they were arrested and persuaded to leave town, which they did, and now their friends are disconsolate."

So for a time at least, Chariton had been cleansed of the stain of sin.

Note: Dan Baker, also an attorney, went on to write the 1881 history of Lucas County, then moved to California where he became the crusading editor of The Orange County Register and The Santa Ana Standard.
Posted by Frank D. Myers at 6:30 AM

What a bunch of hypocrites...