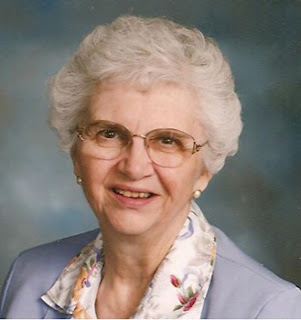 The late Rosemary (Steinbach) Evans (1926-2013) put together a few pages of Lucas County history as a hand-out back in 1990, before she retired from Chariton Free Public Library. The most interesting --- and charming --- part is a list of 20 items headed, "Some Things I Remember."

I came across a few copies of the handout yesterday while sorting papers at the museum and thought others might enjoy Rosemary's memories. Here they are:

1. A skating rink across the alley west from the Catholic Church. It was a wooden floor covered with a tent top. Later there was one just south of the underpass on Highway 14 South, to the left.

2. Little convenience stores around the town. I remember ones on three sides of the high school block. Also, we usually had four or five grocery stories around the square at one time. Bob Piper's family had one of them. His family has been in business in Chariton since 1900. My family has been in the grocery and meat business in Chariton since 1889. My grandfather, Herman Steinbach, opened a meat market that year. My father, George Steinbach, continued in the meat business until his death in 1985. My brothers, Leo and Jim Steinbach, have just closed the business.

3. I remember 10-cent movies. Poor as we were, we went a lot. Always walking --- everywhere. Families had only one car --- if they were lucky. Teen-agers never drove.

4. The ice man. The Chariton Ice Company still did a lot of business. You simply put a card in your window with the number of pounds needed "up" and the ice man would then cut a block the size you needed and carry it in. Much of the ice came from West Lake. Kids picked up all the chips.

6. I remember the Christmas midnight masses, where we little girls dressed as angels, with wings framed with scratchy tinsel and our hands raised throughout the Mass. The dresses were also trimmed in tinsel.

7. When spring cleaning, our mothers used to throw our large area rugs over the clothes lines and we kids had to beat the dirt out of them with wire rug beaters. People didn't have wall-to-wall carpeting then. The frustrating part of the job was that you never knew when you were finished because dust kept coming out.

8. I remember my high school girl friends who lived in the country, boarding in town during the school week. Rural roads were bad. Sometimes several stayed in the same house and they had a ball.

9. My first airplane ride --- in a Piper Cub piloted by Lawrence Tuttle. Airplane rides were not commonplace at that time. We were still awed by them. This was before jets.

10. Being able to leave on the Rock Island train at noon (but it was usually late) and shop in Des Moines, then catch the evening train back to Chariton.

11. Reading in a Popular Mechanics magazine that a television set had been invented. Hard to believe. Most radios didn't work very well.

12. Food stamps during World War II. Everyone got them. You had to have your stamps to buy butter, coffee, sugar and many other things. Margarine had to be white, by law, and hose (stockings) were almost impossible to get.

13. I remember the discovery of the polio vaccine. A miracle! We lived in fear of polio.

14. Flatt's Candy Store, on the east side of the square where Farm Mutual Insurance is now (in 1990). Everyone met there after school for a Coke, sandwich or ice cream.

15. Ice cream socials on the parish lawn. Loved them!

16. I remember when it was style to paint your kitchen floor, and then make designs in it with a sponge dipped in another color. Maybe that was only "style" for those who couldn't afford a new linoleum.

17. I remember when the engineers finished building Rathbun Lake and Dam, and said it would take three years to fill. It took three days! This is the Chariton River! President Nixon attended the dedication.

18. I remember Hy-Vee's contest to name their new organization, in 1952. Joan Farrell and two others from out of town tied for the contest, using the first parts of the names Hyde and Vredenburg. I worked in Hy-Vee's first Chariton grocery --- called "The Supply Store" --- which was where Jack Young has his furniture store (now in 2015 Chariton Floral). Keith Gartin had a store across the street and also one on the north side of the square, at the same time. All groceries.

19. I remember "General Baker" leading our parades. Johnny Jacobs helped him, and now does it alone, on his bicycle.

20. I remember dances at the old "Gun Club." I learned to dance there, and never wanted the evening to end. The "Big Band" era. We knew the words to all the songs.

Rosemary was one of the sweetest, most genuine and kind ladies you could ever meet. I remember my mom stopping to drop off their ironing, mom would iron a whole basket of clothes for $2-3.00, and be thrilled!! ... It was in the 1960's. I can still hear Rosemary saying, "OH JoAnn, what would I do without you!?" Then she would see my dear mom's sweet smile and hear her say, "you would do just fine!" Rosemary had the sweetest voice and kind words to everyone!!
Kathy (Stech) Ryff

Thanks Frank. I have lots of memories of Rosemary as well. I remember visiting her on one of my trips to Chariton and we were talking about her son Jim who lives in Tennessee. During our discussion she showed me a jar of moonshine he had given her. I asked her if she had tried it and she said, "Oh my no!" Of course I
convinced her to sample it with me.
Fred Steinbach

Rosemary was a beautiful person inside and out and a friend of my
Mom, Betty (hazlett) bland. I also remember the ice man I was only about 5
Then and he delivered to a neighbor of my grandmother's, ida (lewman) hazlett.
It was fun reading about rosemary's memories. I have some comments from Bob piper
And his Sunday car rides with his friends as they drove around chariton