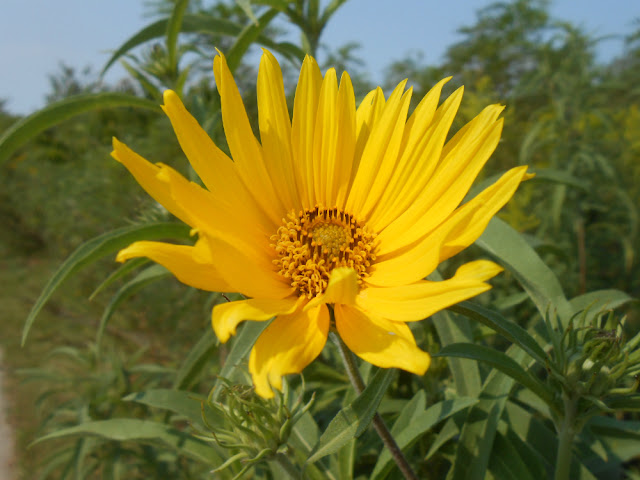 It won't be long now until the countryside is washed in gold, nature's penultimate big show around here as summer ends. The biggest show will come when leaves turn and autumn flames out, but that's still a few weeks away.

I spotted the first of the big sunflowers coming into bloom at Pin Oak Marsh while walking around the east pond Wednesday and the goldenrods have been showing for some time.

The difficulty with this is that I like to be able to name the varieties of whatever it is I'm looking at. That can be a challenge with goldenrod --- there are 100-120 varieties although of course not all of them flourish here.  And many of them are very similar. Sunflowers? Comparable issues but on a smaller scale. 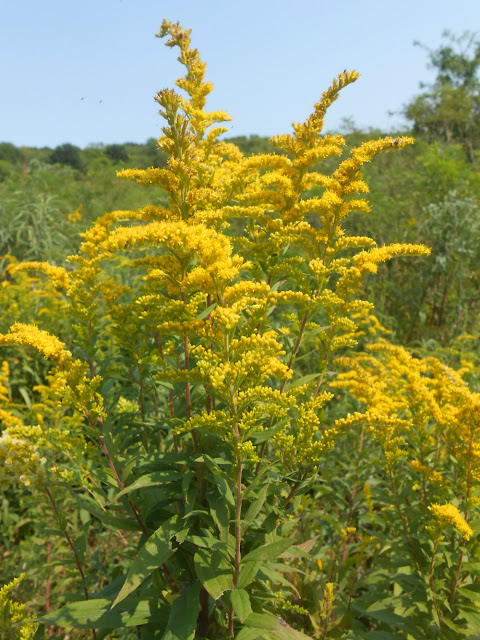 That requires quality time with identification guides and online images --- I find that entertaining; others wouldn't. Then you run into annoying people who carry databases around in their heads and can identify varieties instantly. The really annoying folks, however, are those who don't even open their eyes and look around.

The transition from old computer to new seems to be going well. I like Windows 10 --- didn't care for Windows 8 at all.

The old computer was still plugging along, but nearly everything about it was obsolete and that got to be an issue. I think this is my fifth PC. There was a laptop, too, but never really used.

Since I've no particular need to move the computer around and prefer working with a standard keyboard and large upright monitor, a PC seems to work best for me. Besides, I have access to a laptop if I need it.

The "towers" keep diminishing in size. This one is not that much larger than a laptop --- half the size of the new office PC installed a couple of years ago and maybe a third the size of the home PC it replaced.

I've lost my favorite basic photo processing program, good for instant fixes and resizing --- it came along years ago with a flatbed scanner. But will adjust. My favorite flatbed won't, and will have to be replaced, too, one of these days.

According to Tim, who transferred the data from old to new, I'm now a record-holder --- not for volume of stashed files but for the number of separate items that he'd been asked to transfer from one device to another. Yikes.

There are other advantages to a new computer. Upon picking up the tower to haul it to the shop, I found my "Hillary 2016" button underneath. I've been looking for that.

There was a "Romney 2012" button there, too --- a gift from the ever hopeful Martin B. That one didn't seem to have much of a future, so I threw it away.

I have more pins if you want one-maybe Trump?

Try FastStone Image Viewer. It does a lot of stuff, but I really only ever use it for cropping, red eye removal, and brightness/color fixing. I'm sure you'd find it even more useful. It's freeware without any bugs or anything. Faststone(dot)org.