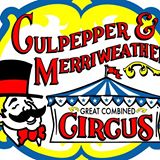 If you still haven't gotten your discounted tickets for Friday's appearance in Chariton by the Culpepper & Merriweather Circus --- well, there's still time. The price of $6 for kids 2-12 and $10 for adults holds until this (Thursday) evening, according to the latest information, but will increase to $7 and $13 respectively on the big day itself.

You can buy tickets at the HyVee service counter, Chuxwagon, Fifth Mile and Family Shoe.

Friday's two big-top performances, at 5 and 7:30 p.m. on the grounds of the former Astoria Building just south of Highway 34 in southeast Chariton, are sponsored as a fund-raising event by Chariton's 4th of July Celebration Committee --- so there's a good cause involved, too.

I thought it might be fun this morning to look back almost exactly a century --- to Thursday, August 19, 1915 --- when the great Ringling Brothers Circus came to Chariton: 89 railroad cars, if the advertisements are to be believed, loaded with "1,000 all-new wonders" and presented as "the greatest circus event in the history of America."

The circus train rolled into town from Creston overnight on Aug. 18-19 onto sidings near the C.B.&Q. Depot just northwest of the square. The complication was the fact that Lucas County, at the time, was a sea of mud.

Despite the difficulties, a performance was held at 1 p.m. on open ground at what then was the north end of Grand Street --- after a rousing parade --- and somewhere in the neighborhood of 8,000-10,000 men, women and children attended.

Then everything was hauled out of the mud and back to the train, loaded aboard and the great circus pulled out late in the day for Grinnell, where performances were held on August 20.

The Ringling circus has come and gone, a fact which will linger in the memory of Chariton people in the years to come, for almost every family in the city was represented in the attendance, while hundreds visited the railway yards to see the animals and wagons unloaded.

The unloading began about 5 o'clock in the morning, wagons were hauled to the north end of Grand street instead of the McDougal pasture because of the conditions of the roads and everything was bustle and work for a time. Then came the order to cease unloading and "crepe hangers" spread the evil report that for various reasons the Ringlings had decided not to unload and give a performance. It was reported that owners of lots to be occupied by the circus people refused permission to use these lots, that the ground was too soft for show purposes, etc.

For about an hour the unloading stopped, but activity then began once more and the paraphernalia of a big circus was rapidly hauled to the "lot." Here it required from thirty to forty big horses to drag a wagon loaded with equipment to its position, while in the evening as many as sixty head of stout horses were hitched to the same vehicle to drag it from its bed of mud. Canvas was spread until the oldest inhabitant and the most experienced traveler declared they had never witnessed such a display before.

The parade came through the streets at 11 o'clock and was the best and biggest ever witnessed in Chariton, a free entertainment being given on the grounds immediately thereafter. Announcement was made during the parade that because of the bad conditions but one show would be given and that the doors would open at 1 o'clock.

At that time a sea of humanity was massed before the entrance. Men, women and children struggled to hold a place before the gates, circus employees pleading with the crowd to move slowly. The mud pulled many a low shoe or slipper from the feet of women and girls who were unwise enough to venture on the grounds with flimsy footwear. There were instances where women and  children fainted from excitement and lack of fresh air and many women reached the goal inside the tents carrying her shoes in her hand. Inside the tents the ground was so soft and spongy that one could not stand still without miring down and people hastily sought their seats to escape the mud.

Despite all these adverse conditions the tent was crowded to capacity though there is wide divergence of views as to the number present. The estimate varies from 8,000 to 17,000. There were 4,200 reserved seats and all these were taken, so that the higher estimate of attendance is probably not far from correct, while one report has it that the gross earnings of the circus totaled $21,000.

It is certain that the circus people were pleased with the crowds which greeted them and they made an honest effort to give a good performance. The "Queen of "Sheba," a brilliant spectacular production, was the finest thing of its kind ever seen in Chariton, the trapese and aerial acts were all first class and the trained elephants showed to good advantage.

Aside from these features, however, the circus was disappointing, though through no fault of the Ringlings. They had the people, the equipment, the ability and the desire to please everybody, but ground conditions made it absolutely impossible for them to give their full show. To those who watched the difficulties which encompassed them on every hand the fact that they could give a show at all is a matter over which to marvel.

Aside from the awful experiences in the mud we venture that Chariton is in the good books of the Ringlings, while the latter are sure to be greeted by big crowds should they return here at some future time.

A great story, Fank. I remember those days of the great parades andunloading the train with harnessed horses and elephants in Clinton. The last year of a parade by Cole Brothers in Davenport, my dad got me up early (5 a.m.) and we went down to see the parade, not only once but we followed it around town at least three times.
We never went to the big show but we watched the acts and animal go into the big tent from the "back yard". Always watched the cook tent go up - usually the first activity to get ready to feed the troops. One time Felix Adler, a clown with the circus and a native of Clinton, invited us to eat breakfast in the teent --- what a treat although the clowns didn't look like clowns and the fancy ladies in the spangles etc did not look so fancy.
I still have a program from the 1930's that documents all this. What is it they say about the "good ole days"? BG