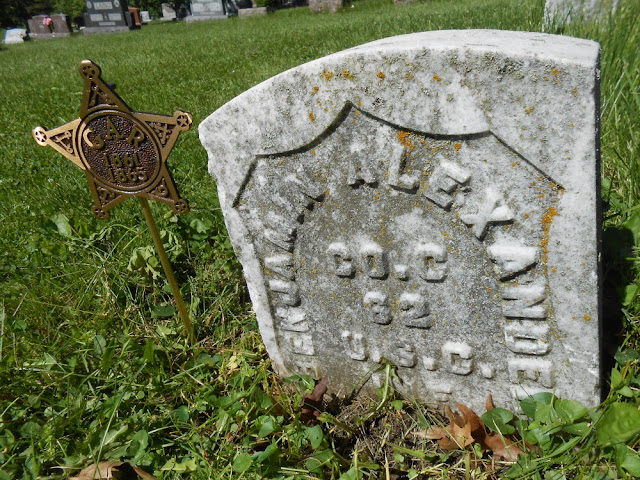 Those flag holders near veteran tombstones in civilian cemeteries across the land may seem like insignificant things. And they're often treated as such --- bent and battered and broken. They're only used once a year, after all, on Memorial Day.

But each is a small gesture of respect, so it made me happy on Monday to replace the inappropriate Confederate holder (below) at William Martin's grave in the Chariton Cemetery with a new Grand Army of the Republic holder (above) --- with assistance from Dick Jones, Lucas County's director of veteran services, who provided the new marker and took custody of the old. 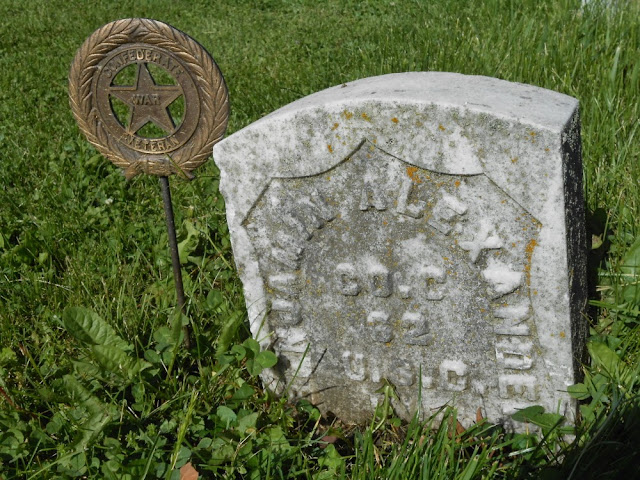 Yes, I know the tombstone inscription reads, "Benjamin Alexander." But William, who had lived in Chariton with his family for more than 45 years when he died here, near the age of 90, on Oct. 20, 1929, was never known by that name in Lucas County.

He was born, ca. 1841-44, into slavery in Chariton or Randolph County, Missouri, but at the age of 22 enlisted under the name Benjamin Alexander in Company C, 62nd Regiment, U.S. Colored Troops. He served for three years until war's end and honorable discharge after deployments in Missouri, Arkansas and Texas.

Even though abolition of slavery was the great issue of the Civil War, Union forces were strictly segregated. The 62nd Regiment, led by white officers, was organized Dec. 14, 1863, at Jefferson Barracks, St. Louis. The 62nd and units like it were the only options for black men who wished to serve the nation that at last had freed them.

After the war, William married Tina Root during 1875 in Kirksville, Missouri, and they moved to Chariton to raise their family of eight children (a ninth child died young) soon after 1880. Tina died during 1916 and is buried near William, but in an unmarked grave.

William received a pension for his Civil War service, commencing in 1892, but only after his pro bono attorney George W. Alexander, a Confederate veteran, helped him sort out the difficulties that arose because he had enlisted under one name but lived under another.

When the time came to order a veteran's tombstone to mark his grave, however, it was issued in the name the government knew him by, Benjamin Alexander.

The Confederate flag holder most likely was placed near the grave within the last 20 years by someone who had misinterpreted the "C" in the "U.S.C." inscribed on the tombstone as "Confederate." At least two men buried in the Chariton Cemetery were U.S. Colored Infantry veterans --- William/Benjamin, buried here, and John Kay, whose grave is nearby but unmarked.

I've written about William/Benjamin before, so if you're interested in a little more detail, go here.

And if you're out wandering around cemeteries this Memorial Day weekend, remember that government-issue tombstones for Union service always have rounded tops; tombstones for those who served the Confederacy, pointed tops. No matter what the flag holders near them indicate.
Posted by Frank D. Myers at 6:47 AM