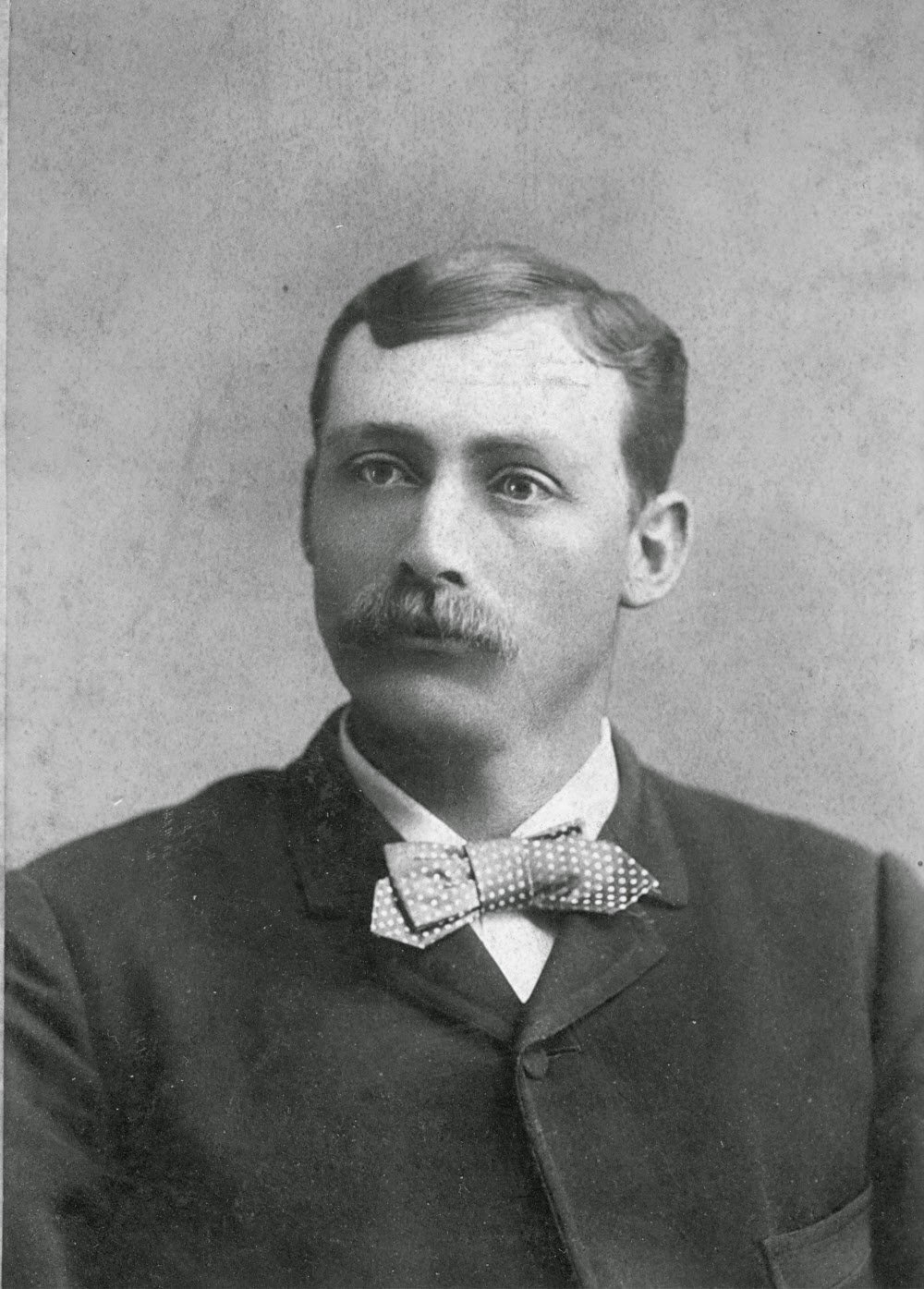 
John W. Rosa, eldest surviving child of John W. and Anna Margaret (Redlingshafer) Rosa, was born 4 July 1857. His obituary gives Bureau County, Illinois, as the place. John, however, said that he was born in St. Louis, according to an oral biography transcribed several years before his death. And to confuse the issue farther, there are good reasons to believe that he actually was born at Pekin in Tazewell County, Illinois.

Whatever the case, when the 1860 federal census enumerator called at the John "Rosy" home in what now is the ghost village of Hollowayville, Bureau County, Illinois, on 20 June of that year, his parents were operating a grocery store and John was 2 years old. His maternal aunt and uncle Anna Maria (Redlingshafer) Banschbach, her husband, Martin, and their family were living nearby.

According to John's obituary, he came to Chariton when he was 8 years old, during the spring of 1865; and was 10 years old when his father died in Chariton of typhoid fever during 1867. John's younger brother, Adam, said the family traveled by rail from Illinois, crossed the Mississippi River on a ferry, then continued the trip by train from Burlington to Eddyville on the Des Moines River --- the end of the line at the time. From Eddyville, the Rosas traveled by stage coach to Chariton.

A year after John Rosa Sr. died, Anna Margaret married Joachim Wulf and the new family moved to a farm in Benton Township, near those of her brothers, John G. and George W. Redlingshafer, and sister, Margaret Anna (Redlingshafer) Hupp. Always a provident women, she had purchased the farm just after John Rosa Sr.'s death. When the 1870 census of Benton Township was taken, however, John was not enumerated as a member of his family's household. At age 13, he may have been visiting or working elsewhere at the time.

John would have begun his education in Chariton, but enrolled in the Gartin School (Washington No. 6) about a mile southwest of his new home, after moving to the country.

By 1880, John was farming full-time and at age 22 living independently. The John W. Rosa farm, until it was sold by his descendants, consisted of two 80-acre tracts, 80 acres in Section 17 on the north side of the road and 80 acres in Section 20 on the south side of the road. Lucas County land records show that he purchased the north 80 from Joseph Gassner on 12 June 1879 (Lucas County Deed Book X, Page 493). 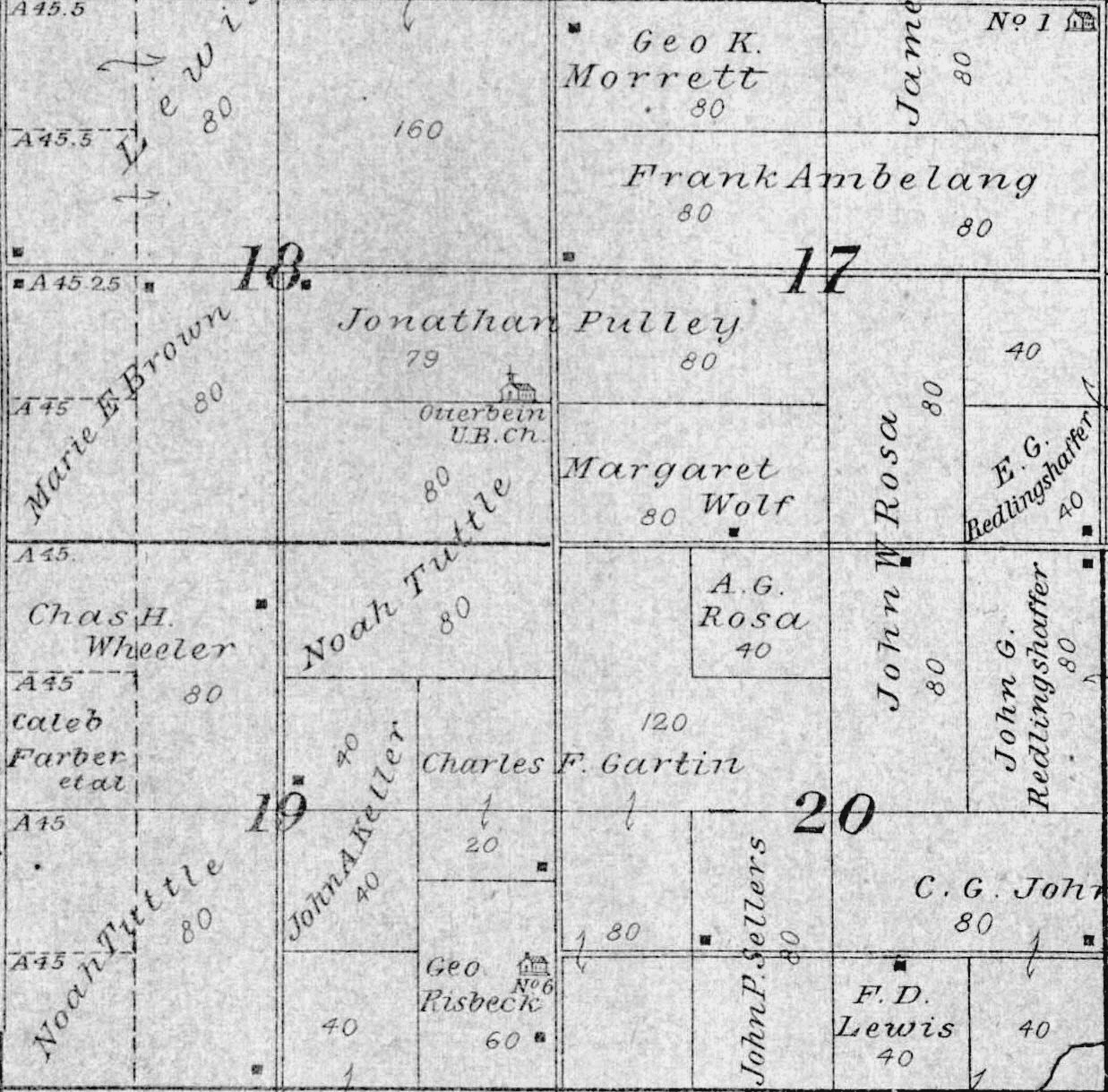 According to his obituary, John "was converted at the age of 16 (during 1873 or 1874) and became a member of the United Brethren Church."

There does not appear to have been a church of any sort in the neighborhood when the extended Redlingshafer family settled in Benton Township, but a United Brethren in Christ class had been organized 15 October 1859 at New York, several miles south in Wayne County. A mission of this class was organized in the Wolf Creek neighborhood and took its name, Gartin Class, from the school where services generally were held. It was served by itinerant preachers, and Hiram and Phoebe Benton reportedly were the first. It probably was within this class that John was converted and he remained an active United Brethren until his death.

During 1889, a church was built on the west side of what now is Highway 14, about a half mile west of John's farm. Named Otterbein after a founder of the United Brethren in Christ denomination, the church was built under the trusteeship of John Rosa, John G. Redlingshafer (his uncle) and J.P. Sellers (a neighbor in the Wolf Creek neighborhood).

John's younger brother and sister both married during 1887, but John passed his 30th birthday on the 4th of July 1887 single and apparently in no hurry to wed.

At some point during the next few years, however, he met Sarah Minerva Chynoweth, a native of Ohio who had grown up near Chariton and who had been teaching in rural schools since her own graduation from Mrs. Stewart's Select School in Chariton during the early 1880s. Sarah Minerva, always known as Minerva rather than Sarah --- and to those of us who were her nieces and nephews as "Auntie Rosy" --- was born 4 November 1864 in Belmont County, Ohio, and had arrived in Lucas County with her family when just six weeks old.

THE CHYNOWETH-DENT FAMILY
Minerva was the first child of Joseph Turner Chynoweth, born 17 March 1819 near Frederick, Maryland, to William and Bridget "Biddy" Turner Chynoweth (natives of England), and his second wife, Eliza Jane (Brown) Dent, born 24 May 1832 in Belmont County, Ohio, to Andrew and Elizabeth (Schooley) Brown. After earlier spouses had died, Joseph and Eliza Jane married ca. 1863, most likely in Monroe County, Ohio --- where the courthouse burned; no trace of a marriage record ever has been found. Jane had one surviving son, Cassius Marcellus Clay Dent (my great-grandfather), from her first marriage --- to George Dent, who died 16 August 1860 in Belmont County. Joseph had one son, Thomas Bentley Chynoweth, from his first marriage --- to Sarah (Calvert) Dent, who had died during 1858. Together, Joseph T. and Eliza Jane had four children: Sarah Minerva, born 4 November 1864 in Ohio; George H., born 28 August 1866 in Lucas County; and twins, Mary and Martha, born 2 March 1868 in Lucas County (Martha died at birth). Joseph T. Chynoweth was a surveyor and farmer. The family lived for a number of years just east of Chariton, near Fairview School, and then moved to a farm near Derby, in Warren Township.

John W. and Minerva may already have been planning to marry when her father died on 16 November 1890 at his Warren Township home at age 72 of heart disease.

And they were indeed married the following spring, at 5 p.m. on Wednesday the 6th of May 1891 at the Chynoweth home with the Rev. L.P. Mitchell, of the United Brethren Church, officiating. That same evening, according to John's obituary, they returned to the Benton Township farm where they were to spend their entire married life.

In honor of the occasion, Mr. and Mrs. "Joseph" Wulf issued engraved invitations to a 7 p.m. reception at their home on Thursday, May 7th, "to welcome their son and daughter."

John W. and Minerva became the parents of two children: George Edward, born 7 November 1892, and Dorothy M., born 13 August 1897. They also welcomed into their home Minerva's niece (and my grandmother), Ethel Dent, age 14, after her mother, Susan Elizabeth (Dunlap) Dent, wife of Minerva's half-brother, Cassius M.C. Dent, died on 12 February 1901 near Rock Rapids in far northwest Iowa. Ethel remained a member of the family until her marriage on 17 October 1906 to Irwin Myers.

Minerva's mother, Eliza Jane, was living with the Rosa family when she died on 31 January 1900. The Rosas also provided a final home for Minerva's sister, Mary (Mollie), who returned to Iowa terminally ill early in 1928 and died on 30 June.

The Rosas were extremely active in Otterbein United Brethren Church, where John served as Sunday school superintendent, class leader, janitor and, according to his obituary, "whever else the Lord called him to do." According to a family story, John even mortgaged 40 acres of his farm in order to make a substantial donation toward building a United Brethren in Christ church in Chariton during 1903.

John also served as president of the Lucas County Mutual Insurance Association from 1909 until 1947, when he retired because of failing health; and he also was an organizer of Lucas County Farm Bureau. He served at times as Wolf Creek correspondent for the Chariton newspapers and, according to his obituary, "never missed voting at his precinct polling place, the Myers School, once during 70 years and had voted by the time he died in 17 presidential elections."

In later years, Minerva and John built a new house on the north 80 of the family farm and turned the older home on the south 80 over to their son, George, and his family.

John died in the new house on Tuesday, 4 January 1947, age 89. Funeral services were held Thursday afternoon, 6 January, at the Miley Funeral Home in Chariton with the Rev. Clifford Carter, pastor of the Evangelical United Brethren Church, officiating. Burial followed in the Chariton Cemetery, just north of his father, mother and stepfather.

Minerva continued to live on the farm for as long as she was able, but eventually moved to the home of her daughter, Dorothy (Rosa) Elson, near Clio in Wayne County, Iowa, where she died on 16 April 1962, age 97. She was buried beside John in the Chariton Cemetery.