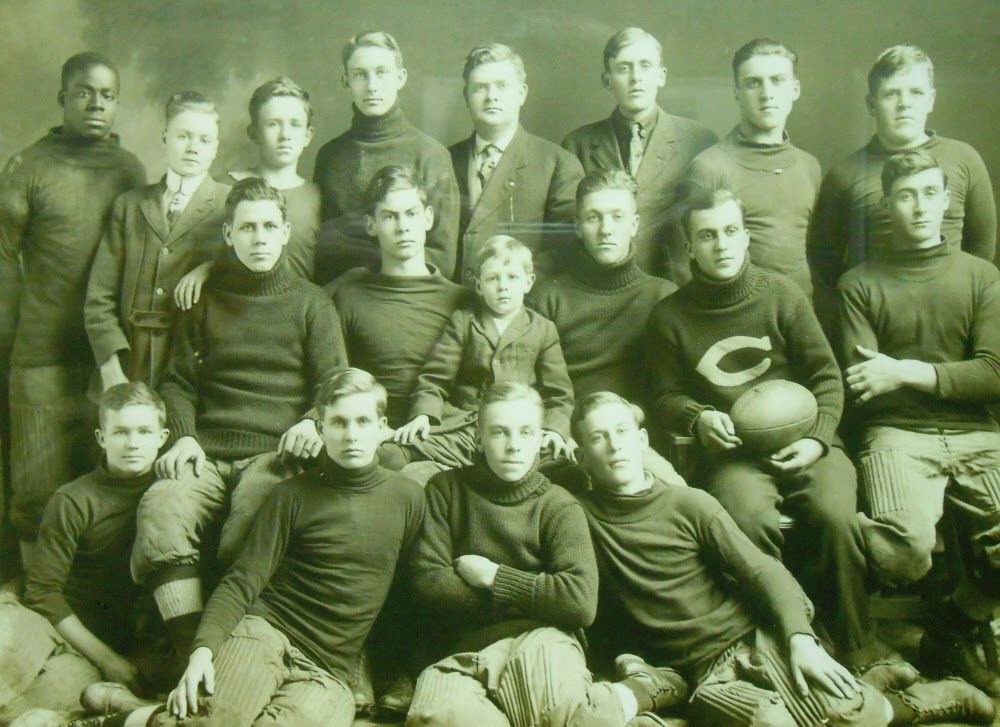 I'm going to write one of these days about Maceo Richmond (upper left in this photo), one of the top student athletes Chariton has produced as well as a pioneer in other fields --- which is why I took a shot yesterday of this framed photo that hangs on a wall at the museum. But that will take a while.

So here's a look at the entire team, declared 1913 South Central Iowa Football Champions after its Thanksgiving Day win over the Simpson College freshmen. The team brought home a six-foot pennant that acknowledged its prowess.

High school football then was in its infancy in Iowa, so things were a little different. The Chargers were scheduled to play eight games, meeting Knoxville and Corydon twice with the Graceland College varsity and Simpson freshmen thrown into the mix. Corydon simply didn't show up for its second match, thereby forfeiting, so only seven games were played. Chariton lost a hard-fought match to Indianola, 0-6, but otherwise won all its games.

The season opened with a 12-0 win over Knoxville, followed by an 18-0 triumph over Corydon before the fail at Indianola. The chargers went on to defeat Albia, 14-0; Graceland, 8-0; Knoxville again, this time 18-0; and the Simpson College freshmen on Thanksgiving Day, 9-6.

The idents for this photo are in a long list, but because Maceo tops the list and I recognize Kirk Jones in the middle row, I'm assuming whoever wrote it began in the upper left hand corner, then proceeded left to right, row by row. I can work this all out, and will, but don't place too much reliance for the time being on the names I've attached to the faces.

Just to give you an idea of how different things were in 1913 --- if not enough players showed up to field a team, coaches suited up, too, and joined the fray.
Posted by Frank D. Myers at 6:37 AM

I love the old team photos. I am looking forward to reading the story of Maceo Richmond.