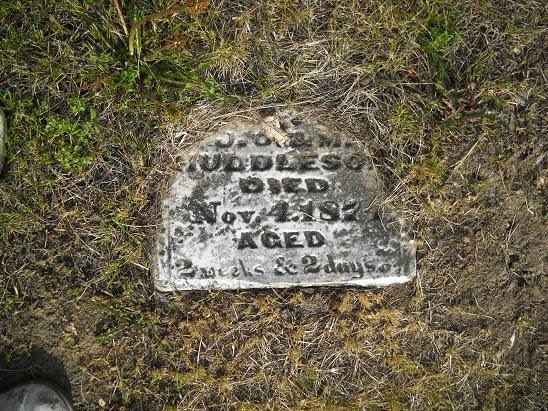 This is a sad story, no getting around that, illustrative of some of the hazards our ancestors faced out here on the prairies and plains. And it's kind of cobbled together, since it's too cold to drive out to Freedom and take my own photo of little Johnny Huddleson's tombstone. So for the time being, I've borrowed one Doris Christensen took and posted to Find a Grave.

By now, considerable restoration work has been done at Freedom and most likely Johnny's tombstone is standing upright again. Once it warms up, I'll go out and see.

Johnny was born near Freedom during late October, 1874, and was what sometimes is called a posthumous child because his father had been killed more than two months earlier.

Perhaps the previous year, or even in late winter 1873-74, his parents --- John Sr. and Mary (Vanderbur) Huddleson --- had left Lucas County with farmily members and friends to settle on newly opened land near Russell, Kansas --- in the heart of that state midway between Kansas City and Denver. Johnny was their first, and only, child.

During the summer of 1874, however, a great grasshopper plague wiped out their crops and left them entirely without resorces to get through the winter that would follow. As a result, the Huddlesons --- Mary then pregnant --- and six others decided to return home together to Lucas County, at least for the winter.

Traveling northeasterly, they had reached Nemaha County, in northeast Kansas, and were traveling some three miles northwest of the pioneer settlement of Axtell on Saturday morning, Aug. 8, most likely headed for a Missiouri Rever crossing at Nebraska City, when overtaken by a violent thunder storm. The party sought shelter by driving their canvas-covered wagon into a depression, or "ravine," alongside the trail and then gathering inside it. The following article clipped from The Chariton Leader of August 15, 1874, describes what happened next.

According to other reports, the adult Vanderburs and one of their children were seated in the rear of the wagon, John and Mary were on the floor and Edward Ross and two of the Vanderbur children were in the front of the wagon when the lightning strike occurred. John and Edward were killed instantly, the lightning passing through John's watch, leaving a hole the size of a bullet through it and breaking the crystal. Injuries to the others were not serous, although Mary reportedly sustained burns on her legs.

The party was able to continue with assistance to Seneca, the Nemaha County seat, where the men's bodies were taken to the Union Hotel and prepared for burial. Funeral services, attended by many sympathetic residents of the little town, were held at the hotel on Sunday and burial followed in a Seneca cemetery.

On Monday, remaining members of the party continued on their journey to Lucas County.

Little Johnny, born two months later near Freedom, survived only two weeks and two days --- then was buried on the Vanderbur family lot in Freedom Cemetery.

A year later, on Aug. 29, 1875, Mary married in Lucas County as her second husband George Thomas Robbins. By 1879, they had returned to Russell, Kansas, and raised their family of seven children near there.

George Robbins died at Russell at age 71 during 1913. Mary survived until Feb. 15, 1942, when she died at age 90 at the home of one of her children in Ohio. Her remains were returned to Russell for burial beside George.