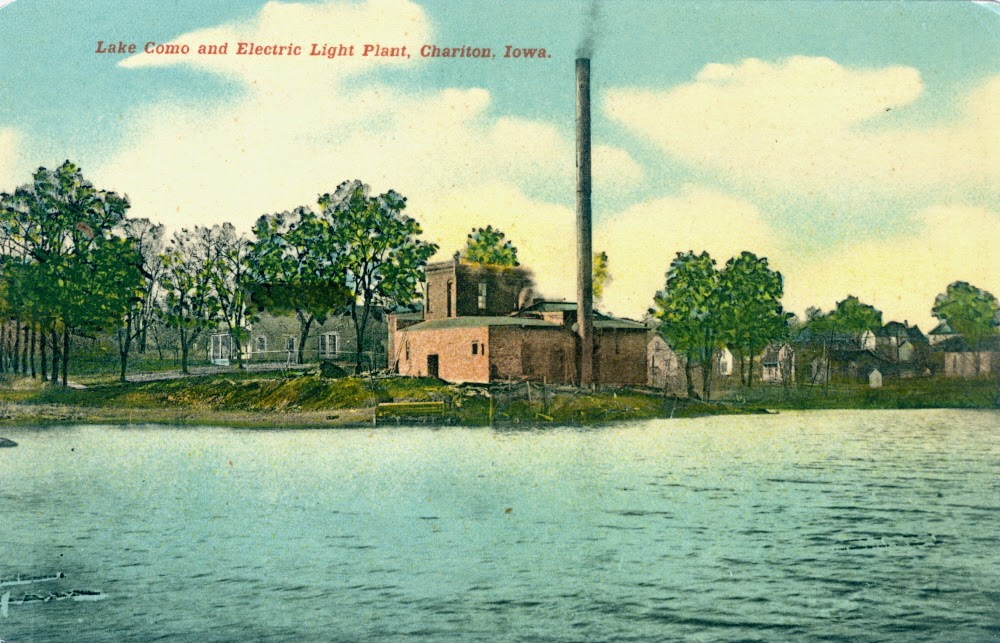 This is the third in a series of posts about what now is Yocom Park, an area  first developed in 1889 as a big pond dubbed Lake Como with the city's electrical generating plant on its west shore --- right up against what now is North 7th Street (Highway 14).

Here's a post card view of the plant, apparently taken from the lake, looking northeast. The house just to the left of the plant would have been on the west side of North 7th. By this time --- and I don't have a date for the card --- a substantial addition had been made to the lake (east) side of the 1889 plant and the number of smokestacks had been reduced from four to one as more efficient equipment was installed.

As noted earlier, Chariton voters approved sale of the generating plant to a privately held concern in 1914 --- a company that also owned a generating plant in Osceola and moved within a few years to build the region's first grid, connecting smaller towns with the Osceola and Chariton plants. Rural Lucas and Clarke counties, however, remained in the dark until the Rural Electrification Administration came along years later.

Although modest improvements were made to the Chariton plant after its sale, it was by 1914 obsolete and still badly located with no room for expansion. The Rock Island rail line had been completed through Chariton from north to south in 1913, so coal to fire the plant was much closer now --- but still two blocks away. To deal with that issue, a new plant was constructed right on the rail line to the east-northeast of what now is Yocom Park, the old plant was demolished, the pond abandoned and eventually drained and --- humans being what humans are (messy) --- allowed to degenerate into a dump.

By the early 1920s, the area was both an eyesore and a health hazard and a consortium of public officials and private groups and individuals began working together to resolve the issue. Prime movers in this effort were Park Board Chairman J.C. Flatt, veteran businessman and owner of Flatt's Candy Kitchen on the west side of the square, and William L. Perkins, architect and city engineer. The prime motivators probably were members of the Chariton Woman's Club, then working to revive North Park, too.

Plans to redevelop the area were brought before City Council first during March of 1922 and the following report was published in The Herald Patriot of March 23 under the headline, "To Beautify City Eye Sore."

The council chamber was crowded on Monday evening with men and women urging the city council to cooperate with them in cleaning up the unsightly dump near the electric light plant and transforming it into a beauty spot which all could enjoy.

Mr. J.C. Flatt presented the proposition, showing drawings of the proposed work. These plans were drawn by City Engineer Perkins, who has offered to contribute his services to carry through the improvement. Mr. Flatt told the council a large number of citizens were ready to subscribe, dollar for dollar, for all the money the city might expend on this park plan this year, and suggested that a committee of two from the council, two from the subscribers, and a fifth to be chosen by the first four, be appointed to supervise the work. He said however, that but little showing could be made the first year and that people would not wish to donate unless assured that these or similar plans would be carried through.

The plans provide for a series of sodded terraces, with walks and driveways, to descend gradually to the center of the natural amphitheater where a band stand or recreation grounds would be located. Provision is made for tennis courts, horseshoe grounds and children's playgrounds. Hedges, trees and shrubbery with rustic seats about the park would complete the picture, making this a beauty spot and a pleasure ground for all.

Several, both men and women, supported the plan before the council and on motion of Mr. Timmins, the proposal was referred to the park committee with instructions to consult with committees from other bodies and to report at the next meeting.

This is one of the very few places in Chariton for which we need to blush. It is a blemish and so unsanitary as to amount to a nuisance. It is possible that the council may see fit to put in the necessary sewerage this year; citizens paying for other improvements. For later years and to complete the plans, the law permits a levy not to exceed two mills which would be sufficient for the purpose.

Plans for the new park had advanced during late March and early April to the point that the City Council at its next meeting approved a resolution setting aside the the old electric plant site for park purposes and agreeing to install needed sewer lines and drainage tiles.

The first private money subscribed for the project, according to The Herald Patriot of April 6, was $25 pledged by the Bancroft School Parent-Teacher Association. The Chariton Woman's Club had voted to raise $500 within its membership; and a canvass of the city was planned, hopefully to raise approximately $1,500. The Chariton Commerical Club would take the lead in the latter drive.

Perkins had donated his services to deisign and draw complete plans for the project, intended to be incremental, developed over five years.

During late June, City 'Council gave the go-ahead for preliminary work needed to prepare the site --- bringing North 7th Street up to the proper grade and installing sewer and tile lines --- so that work on the project could begin. And so that summer, what now is Yocom Park began to rise from the ruins of Lake Como.